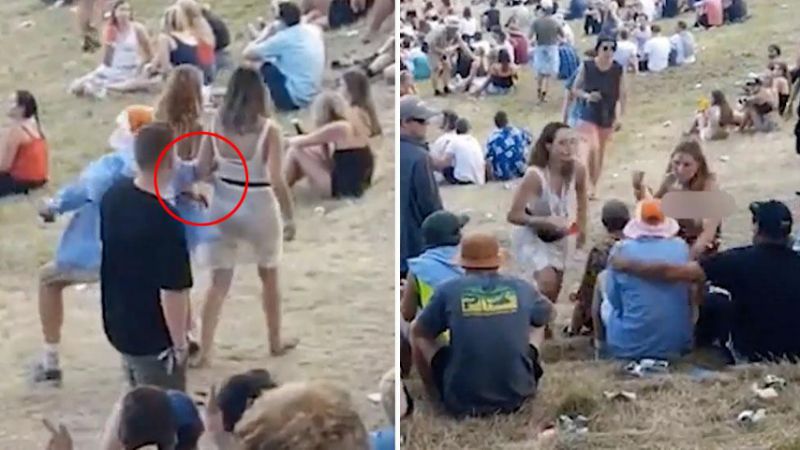 The topless woman in a now is speaking out after the footage surfaced her punching a guy who groped her from behind at Rhythm & Vines.

Madeline Anello-Kitzmiller, 20, was wearing only glitter on her chest during the New Zealand music festival over NYE weekend when she was touched inappropriately by a fellow attendee. She was walking next to her friend Kiri-Ann Hatfield when the incident occurred and two pursued the violator to throw a drink and repeated punches in his face.

Here’s what Anello-Kitzmiller has to say about the viral revenge attack, :

“I stand by my actions and hope that I’ve inspired women to feel comfortable in their bodies, no matter how they look, and to stick up for themselves when anybody says otherwise or tries to deny you the right to protect your own body.”

“He grabbed my breast. I hit him. There was a lot built up anger coming from harassment throughout the day. This happens everywhere, not just New Zealand.”

“In the end, we are all born naked, and each human is uniquely similar to the next in that we all have a naked body. You don’t look at yourself in the shower and say ‘ew, disgusting’ right? So why should anybody say that to anybody else? A humans body is their own, and nobody has a right to touch you without your consent, regardless what they’re wearing or the lack there.”

Anello-Kitzmiller was expressing herself and her freedom to present herself as she pleases — not “asking for it.” Comments like that, which have readily surfaced along with the viral video only normalize rape culture. What someone is wearing or not wearing does not equal consent.

Thankfully, these women didn’t let the unfortunate incident ruin their time at Rhythm & Vines. They danced all night and had a blast!