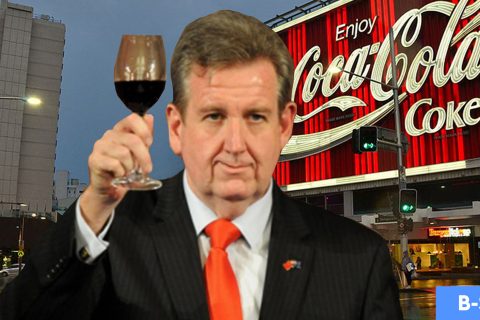 Former NSW premier and known wine connoisseur Barry O’Farrell has been spotted cracking open a $3000 bottle of Penfolds Grange at the fourth birthday party of the Sydney lockouts. The event, which was held in the Sydney suburb of Potts Point (formerly known as Kings Cross) was attended by local developers, current members of the NSW Liberal/Nationals party as well as a number of  DJs turned cafe owners in the area.

While key-note speaker O’Farrell assured guests the lavish bottle of wine was not a gift, but merely a bottle purchased from a local bottle-o. He was overheard telling guests between sips that “since getting a taste for Grange I can’t get enough of the stuff. It’s definitely worth the price tag and constant harassment from ICAC”.

Among the guests was another former NSW premier in Mike Baird, who gave a short speech titled “0-100: my inspirational journey from dodgy Premier to dodgy banker”, and current Premier Gladys Berejiklian, who sung praise for O’Farrell for the sleepy CBD he helped create.