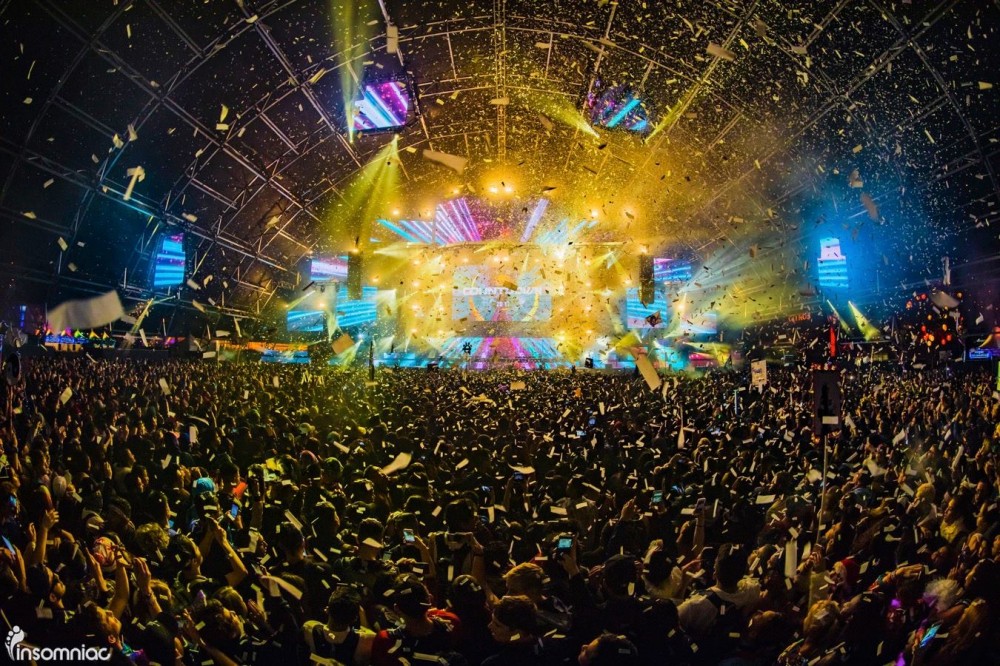 Another New Year’s Eve has come and gone. This year I was lucky enough to attend Insomniac’s major SoCal event, Countdown NYE. As a first-year attendee, I left seriously impressed by the production value. I can safely say that Countdown is another great example how Insomniac is leading the game when it comes to curating special live events.

First f, the festival grounds looked amazing. Insomniac is known for their attention to detail and they did not skimp on this event, despite the fact it is one their smaller productions compared to festivals like EDC Las Vegas and Electric Forest. The colorful light trees and artwork installations turned the NOS Events Center into a magical place. My friends and I loved just sitting amongst the lights when we needed to take a break.

There were four stages total: three larger stages featuring a variety genres and one heated tent stage with picnic tables playing house and tech-house all night. The heated tent was a favorite amongst my group for a place to relax and warm up all while listening to some great house music from local talent. We really enjoyed this touch to the festival.

Of course the grand production value lied at the larger stages: Resolution, Infinity, and Continuum. The crowds were never too large, which allowed us plenty room to dance without bumping into people – an element that was much appreciated. The vibe the crowds were amazing as well, as they usually are at Insomniac events.

Now, onto the main reason we all attend these festivals: the music. The main genres featured on the lineup were house, dubstep, and trap. The first day featured a lot great house sets from Brohug, Mercer, Dombresky, a Mercer b2b Dombresky set, and Shiba San. Mercer in particular blew me away – I highly recommend catching him sometime if you like bumping bass house that will get you dancing. What So Not was my personal favorite the first night, delivering that beautiful and dirty trap for which he’s known. And, course, the ever-impressive Porter Robinson threw down a sick DJ set to close out the night, heavily featuring his Worlds catalog.

The second night, New Year’s Eve, featured a heavier dubstep and trap lineup, along with the countdown going to Deadmau5, Yellow Claw, and Borgore. We decided to ring in the new year with Deadmau5 and his famous cube set-up – and this time around was easily the bets the three times I’ve had the opportunity to see him. He knew how to work the crowd that night and played some amazing progressive house. He brought in the new year with a , which definitely brought excitement to the crowd.

The other highlight the second day was, without a doubt, Joyryde. My entire group friends agreed that he threw down the best and most fun set by far, in our opinion. He excellently demonstrated why he’s on top the game right now with his impeccable DJing skills and song selection.

My surprise set the day, though, was an up-and-comer named Kayoh. We heard him playing as we walked into the venue and decided to check him out. Once we stepped inside that tent we found it hard to leave leave – he was playing a super fun and unique trap set that was not full all the obvious bangers many festival trap DJs play. I did not attend the Funtcase, set but I heard from other attendees that it was one the best dubstep sets they’ve ever seen.

The only recommendation I have is they add more water stations, as there was only one in the GA area. Placing another on the opposite side the festival grounds would be a great convenience to attendees. Other than that, I really have no qualms about the way the festival is run. One the best touches was the free monitored parking lots for attendees right outside the venue, which made it quick, easy, and free to transport ourselves to and from the festival each day.

All-in-all, Countdown was the best way for me to ring in the new year and I definitely recommend the event to festival lovers. To sum it up, it’s a highly enjoyable and fun smaller-scale festival with an awesome crowd and great production. I clearly had a blast.