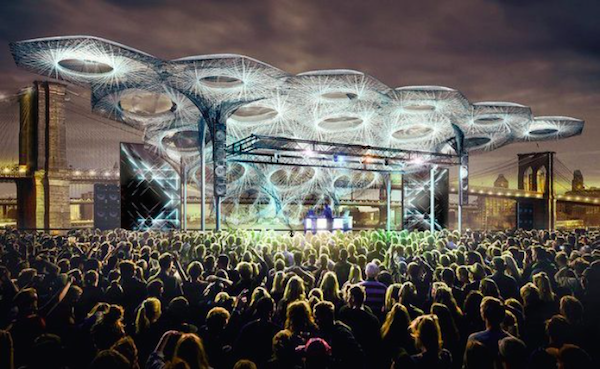 New York City‘s music venues have been lacking in recent times, particularly with the closure of Webster Hall. However, it seems we are experiencing some sort of revival. With countless upcoming events already set to take place already at the new Brooklyn Mirage, New York has just revealed yet another prosperous venue.

If you are local to the city, chances are you have been to what used to be the famous South Street Seaport. After it’s demolition, many were uncertain of what would come in it’s place. After many years of waiting, we can not be more excited as it has been announced that a new rooftop concert venue will take the place of what once was our beloved South Street Seaport.

The venue is being called The Rooftop at Pier 17 and is expected to host a capacity of 3,500 attendees across two acres of rooftop space. All of New York City’s landmarks including the One World Trade, Empire State Building, Statue of Liberty and even the Brooklyn Bridge will be in the backdrop while you party the night away. The venue has just announced their concert series lineup with a many impressive talents including Kings of Leon, Slash, All Time Low, Michael McDonald and of course deadmau5. The festivities will kick off on July 28th and will carry on throughout October with possibly more events to be announced.

deadmau5 is set to take the stage on September 8th. Ticketmaster presale will be available here tomorrow morning at 10AM EST while the general public can purchase their tickets starting Friday at 10AM EST. Check out the full schedule of events taking place at the Rooftop at Pier 17 below.