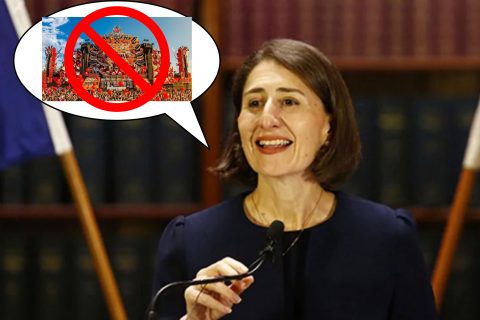 The Premier of NSW Gladys Berejiklian has just disappointed the NSW festival scene after her press release in regards to safety at local music festivals.

After the two deaths at Defqon, Berejiklian proudly claimed that the popular music festival would never take place in NSW again (before backflipping) and set about organising a panel of ‘experts’ to do something about it.

Having staunchly denied the positives of pill testing we had been waiting with baited breath for, the panel results are here and it’s safe to say it’s pretty close to what we expected.

The general ideas we got from the conference was that there will be three new policies moving forward;

Stoney Roads: This is good

NSW Gov: Improving the regulation of music festivals by introducing a new, specific and consistent licensing regime to improve safety, and provide certainty for the music festival industry and other stakeholders

Stoney Roads: This one seems a little suspect when you consider that the head of the Independent Liquor & Gaming Authority Philip Crawford was part of the decision and heavily supported the NSW lockout laws. At the end of the day music festivals are already held to strict licensing regulations and do a STACK of things to keep you safe, check out a list of those measures here.

NSW Gov: New laws to target drug suppliers that will hold dealers responsible for deaths they cause, and trialling on-the-spot fines for drug possession at music festivals.

Stoney Roads: This one seems like a bit of a knee jerk in our opinion. On the spot fines of $400 – $500 could help reduce clutter in courts (if that is what is being suggested), but we’d suspect this will just inversely affect the user who may/may not be able to pay the fine and end up carrying the debt owed to the state government.

We’d also like to see the stats on how many times the dealer is brought into the equation after someone dies from a drug overdose as well. Also imagine if you gave a friend something and they ended up dying, you could theoretically be up for a 10 to 25 year sentence.

“The Attorney-General and the police force will be working together … we envisage it will be anywhere between grievous bodily harm, which is 10 years [maximum in prison], and manslaughter, which is 25 years [maximum in prison], so somewhere in that range,” Ms Berejiklian said according to The Sydney Morning Herald, adding  “We want to send a very strong message that if you knowingly supply someone, even without knowledge … and that person dies, you have to be held accountable.”.

Sidenote the current amount you’d need to be deemed in possession of a ‘traffic-able’ amount is 3 grams of ecstasy according to Armstrong Legal, so you could theoretically be charged by having around 3 pills on you.

Things that they’ve ruled out include pill testing which was effectively used at this years Groovin the Moo festival in which dangerous substances were identified and has been effectively used around the world at music events and festivals for decades:

In short, does this really address how and why people take drugs in the first place or just more punitive measures to discourage drug use that hasn’t been very effective for the last 50+ years globally?

So that’s the round up in regards to the future of music festivals in NSW, you can read more about it by following #NSWpol where journalists were live tweeting, and read the official media release here.

Update: check out the full report here, includes an interesting tid-bit that the dataset was pulled from festivals held on land managed by the Office of Environment and Heritage, not all festivals held in NSW, so about 22 festivals in total.

Crunching the numbers the data looks like the below;

See the doc below;