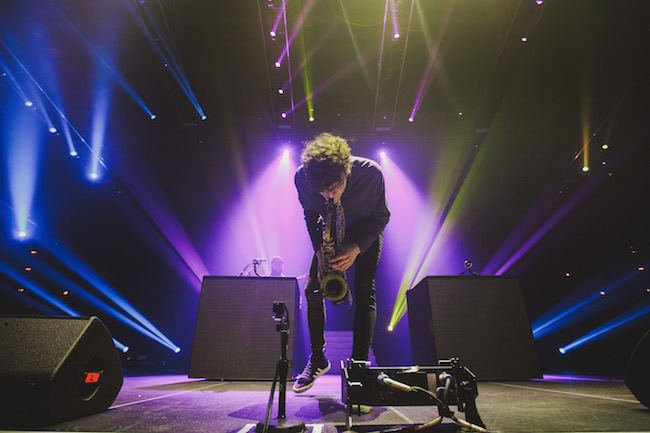 Last weekend, Grant Kwiecinski, better known as GRiZ, took to Asheville, North Carolina for his second straight New Year’s Eve ‘Get Down‘ to bring in 2018 like only he can. Last year, GRiZ celebrated the start 2017 in Asheville for his first ever ‘Get Down’ at the U.S. Cellular Center. Following last year’s show, he promised to return to make New Year’s Eve in Asheville an annual tradition. Return he did, this time performing for two nights; the first night with his 14-piece live band, followed by a high energy set featuring some his all time classics, much his new unreleased music, and a little bit fun funky flavor in between. ‘The Get Down’ represented a culmination a year full accomplishments for Grant and his team, as they showed f a polished version the live band compared to the Red Rocks debut, and displayed an incredible ability to translate GRiZ’s electronic productions into an immersive live experience.

Night one featured a wild mix music from start to finish. Opening up the night was the Nth Power; Nth Power drummer Nikki Glaspie is the drummer for the GRiZ Live Band, and she also toured extensively as Beyonce’s live drummer for five years. The Nth Power was formed during a late night jam session at the 2012 Jazz Fest in New Orleans. Judging by their set, the creative and free flowing vibe a jam session definitely played a significant role in creating their sound. The set was all kinds jammy, groovy, soulful, and just the perfect way to kick f a magical evening. Following the Nth Power came DJ Craze, an old school hip-hop scratch DJ who took the vibe in a completely different direction for his hour on stage. It was a slightly odd selection to have before the headline act that followed, but Craze was definitely a crowd pleaser and kept the vibes high. Playing a selection very well known mostly 90s hip-hop, he got the crowd ready with a mixture his improvisation ability along with the fact that he played songs the entire crowd knew.

Finally, it was time for GRiZ and Muzzy Bearr to take their typical places at the front wielding their saxophone and guitar respectively, while the stage filled up behind them with the rest the band. First f, it’s entirely necessary to mention the vast improvement the live band in the months since their Red Rocks debut. Red Rocks was (obviously) the best place for Grant to debut the band. He has adopted Denver as his second hometown, it was his third time playing the venue (located in Morrison), and the acoustics within Red Rocks are superior to almost anywhere in the world. However, that show was not without its kinks.

That was not the case in Asheville, at an indoor venue that certainly did not possess the same sonic environment as Red Rocks. The band seemed to be more in sync with each other, and each individual member had their moment to shine with epic jams built in between many the songs. The band ran through several GRiZ’s greatest hits including “Good Times Roll,” “Dance With Me,” and “A Fine Way to Die” in the first half the set. The second half was comprised mostly songs from Good Will Prevail, including “Before I Go,” “Driftin‘” and “Wicked.” They definitely saved the best for the last with an unbelievable rendition  “Gotta Push On,” before encoring with “Stop Trippin’” from the Say It Loud album.

Night one was a spectacle, but night two was special in an entirely different way. The show began with Brasstracks, the New York based duo featuring Ivan Jackson on trumpet and Conor Rayne on drums. Brasstracks experienced a quick rise to stardom in 2017, finding themselves on many major festival lineups, as well as opening for GRiZ on multiple occasions. They gained recognition from their 2016 EP Good Love, and followed up in late 2017 with For Those Who Know Pt. 1. Their set was comprised most the songs from both EPs, as well as their covers well known tracks “All the Lights” by Kanye West and “XO Tour Llif3” by Lil Uzi Vert.

After Brasstracks was Vancouver native Ekali, who took the energy through the ro, playing some the hardest hitting trap and future bass tracks the past year including Skrillex’s remix “Humble”, “Vision” by Slumberjack, Quix & Josh Pan, and Nitti Gritti’s mashup remix Kanye’s “All the Lights” and San Holo’s “Light.” He also ran through much his catalogue tracks, including “Babylon” featuring Denzel Curry, “Blame” with ZHU, Past Life featuring Opia and his remix Flux Pavilion’s “I Can’t Stop”

For a second evening, GRiZ took the stage. This set was one the heavier sets we’ve seen from GRiZ this year, and he came out slinging heat from the very beginning. He opened with a new ID that may find a place on his next album, followed by his latest remix Freddy Todd’s “Audible Edibles,” which is less a song than it is a sonic boom in its short two minutes. Throughout the set he dropped several his well known IDs, most notably the tentatively dubbed as “Anti Saxophone Saxophone Club,” “One Million Fire Emojis,” and “Supafly” with Boogie T. While there were certainly some similarities in this set compared to some sets he’s played this year, he sent the crowd into a frenzy when he dropped the semi-rare “Smash the Funk” f his 2013 album Mad Liberation.

As the countdown to midnight began, GRiZ threw on The Killers’ “All These Things That I’ve Done,” popped a bottle and joined in with the crowd to celebrate the start the new year as hundreds balloons rained down. The second annual New Year’s Eve ‘Get Down’ was a huge success and an incredible way to start the new year. We can’t wait to see what GRiZ has in store for 2018, and look forward to seeing what he brings to the next ‘Get Down.’