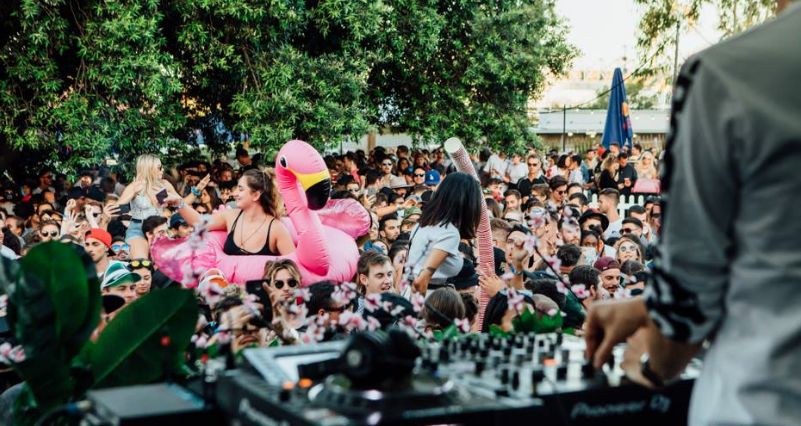 Melbourne – just before Christmas we told you to for the first few months the year and we weren’t lying. The prestigious Piknic Électronik last weekend kicked f its massive season four lineup and by all reports things were heaving with Detroit tech don Luke Hess setting the tone. If you need a refresher on just what this event is all about, from February to April, Piknic will host nine daytime dance events at the Sidney Myer Music Bowl, with over 18 international acts and a slew fantastic locals such as DJ Seinfeld, Agents Of Time, Tiga, George FitzGerald, Ben Cromack, Yotto, Human Movement, Willaris K, Andy Garvey, Luen Jacobs, and many more.

If your someone that loves a big one come Saturday and need those extra few hours shut in the morning, then are looking for somewhere to drag your mates along too come Sunday arvo, then Piknic Électronik was designed for you. As we said before, Piknic Électronik runs from February to April and although we highly suggest you attend the event every Sunday, we also know that you’re people and every now again your body needs some R&R. Therefore, we’ve done the homework and put together a little rundown on five names we strongly suggest you muster up your mates for come these final weeks the Australian summer.

If your thirsting for an immaculate live show, then look no further than Agents Of Time. Hailing from Italy, I’m sure if you asked anyone with a subtle love for live tech who they would love to watch on a Sunday afternoon whilst basking in the sunshine, I’m sure the name Agents Of Time would slip out. Creatively pushing all things house and tech house to new ground, the Italian trio are nothing short being pioneers. Don’t miss this! Find more information on the February 25th lineup .

We’re tipping huge things for these two this year and by all reports they absolutely nailed their rather early set at Sugar Mountain last month provided many reasons why. Fusing house and disco, the Australian duo will no doubt set quite the tone as the share duties alongside DJ Seinfeld, Marcus Marr and two homegrown favourites ours Andy Garvey and Luen Jacobs come March 4. Find more information on the March 4th lineup .

Arguably one the most influential figures the Detroit tech scene, Derrick May is a living legend. One three members responsible for helping to establish the techno scene in Detroit in the early ‘60s, May knows a thing or two about all things tech and come April 1st the city Melbourne / the crowd at Piknic Électronik is truly in for something special. It’s not very ten you get the chance to catch an icon the underground music scene, so this is definite do not miss. Find more information on the April 1st lineup .

If you and your mates attend one Piknic Électronik’s Sunday session this season it’s one. April 9 commences Piknic Électronik season four and wow have they managed to put together an incredible lineup. Everyone from U.K’s George Fitzgerald to natives Willaris. K and Human Movement (plus a stack more) have been tapped to send the 2018 season f. Picking a favourite and one we highly suggest you don’t miss, Finland’s, Yotto, is one that has done a ton right as late. Armed with a staple deep house hits and signed to one the most respected labels in the biz in Anjunadeep, you best grab a beverage or two because you’re in for a real treat. Find more information on the April 9 lineup .

Whether you’re a fan his older work or his newer material, one things a genuine guarantee whenever Marcus Marr is curating the sound and that is you best be ready to groove. We briefly touched on the March 4 installment Piknic Électronik above, where Ara Koufax will also be joining Marr on the day, but this another Sunday we really really suggest you get down too. Accompany the knowledge that Marr has a catalog bonafide hits (remember that banger with Nick Murphy f.k.a Chet Faker!) with a few sneaky beverages and March 4 has pretty much sold itself. Find more information on the March 4 lineup .

For more information on tickets, the lineup and much more about season four Piknic Électronik, head on over .