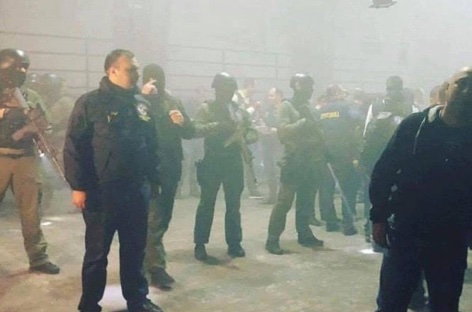 Early on Saturday morning police forces raided two extremely popular clubs based in Tiblisi, Georgia. The two clubs Bassiani and Café Gallery were raided by police forces wielding assault-style gear. The raids were executed due to the recent deaths of five individuals – events which the authorities claim are linked to Bassiani.

All my love and support to the clubs and ravers of Tbilisi and to all my Georgian friends that became like a family to me. Your voices will be heard! And I’m honoured to have raised the flag of techno on the parliament for you!

“The most importantly, BASSIANI / HOROOM is a collective movement that stands at the forefront of the social changes and speaks loudly regarding the inequality in the country”

The club released a statement on Facebook stating that none of the deaths occurred at the club. Instead it is believed that the deaths are being used to sustain a Soviet-era political regime. Their Facebook post tells that the assault included the arrest of 60 people and the club owners Tato Getia and Zd Gelbakhiani. In response to the overly ambitious raid, organizers have taken the situation into their own hands.

The aforementioned organizers have organized a protest rave, which has yielded thousands in support. People are taking to the streets side by side, uniting under music. The protesters have converged on the Parliament of Georgia which is in the capitol, Tibilisi. Furthermore the protesters have even gone so far as to set up tents to camp out until dawn, bracing the rain.

Videos of the protest look intense – because the people are passionate about reform on a governmental level. Independent from the partisan aspect, the government enforces an extremely strict set of laws on drug users. An extremely small amount of narcotics can land someone in prison for years. Recently new laws were being introduced that allow a more liberal outlook on recreational drugs. It appears there may be a correlation between timing of the raid and new laws. While the bust was pertaining to suspected drug trafficking, the protests are connected to deep seeded issues in the community,

In conclusion, this resistance is an indicator of the growing gap between politicians and populous. A protest of this magnitude serves as a reminder that messages can be sent peacefully, in a seemingly violent world.

We express our acknowledgements and appreciation for the writers at residentadvisor.net for their information regarding this breaking news, and the importance of maintaining a free press.