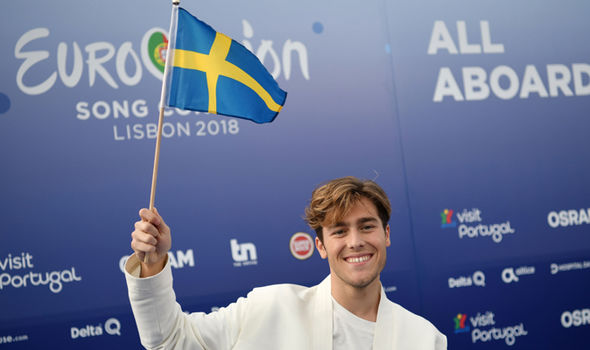 This coming weekends marks the start of Eurovision 2018 in Lisbon. If you haven’t heard of Eurovision, the song contest is the longest running international TV song competition. The competition occurs once a year and is held primarily among the member countries of the European Broadcasting Union. Each participating country submits an original song which is later voted on for a winner. Winning Eurovision provides a nice boost to the winning artists’ career and gets their name heard. Overall, it’s a great opportunity for up and coming artist to represent their countries while meeting other musicians.

All eyes are on Benjamin Ingrosso who will be representing Sweden this year. Benjamin Ingrosso is the cousin of Sebastian Ingrosso, AKA 1/3 of Swedish House Mafia and now Axwell Λ Ingrosso. This weekend, 20-year-old Benjamin will be performing the song “Dance You Off“. After being turned down last year to represent Sweden, he tried again and was chosen by the public for this year’s competition back in January.

“Born in Sweden on the outskirts of Stockholm and raised with a strong tie to his Italian heritage, it didn’t take long for Benjamin to find his feet within the world of entertainment.”

“The self-trained pianist and guitarist spent his early childhood crafting his ear and eye for songmanship.”

“It served him well, for by the age of nine he had already penned his first gold-certified hit.”

“There’s a lot more ways to show the world what you’re all about.”

“I don’t want to just be an artist. I want to be an entertainer.”

“The number has to be something you really want to see and hear. It’s an experience that can play with all the senses.”

The Ingrosso family definitely shares special talent in the music industry! At the moment, Betfair places Sweden at 14/1 odds of winning Eurovision this year. Yesterday, Russia received a shocking elimination, the first time the country has not qualified since 1998. Furthermore, Australia, Denmark and Hungary are among the remaining countries to appear in Saturday’s final. Overall, Sweden has a better chance of winning the competition since Benjamin will be singing his song in English.

British viewers can view Eurovision 2018 online BBC iPlayer. Also, Semi-finals can be viewed through the live-stream on BBC Four on iPlayer and on the television channel. Additionally, all of the shows will be available on the official Eurovision Song Contest YouTube Channel. Best of luck to Benjamin Ingrosso and the rest of the contestants!