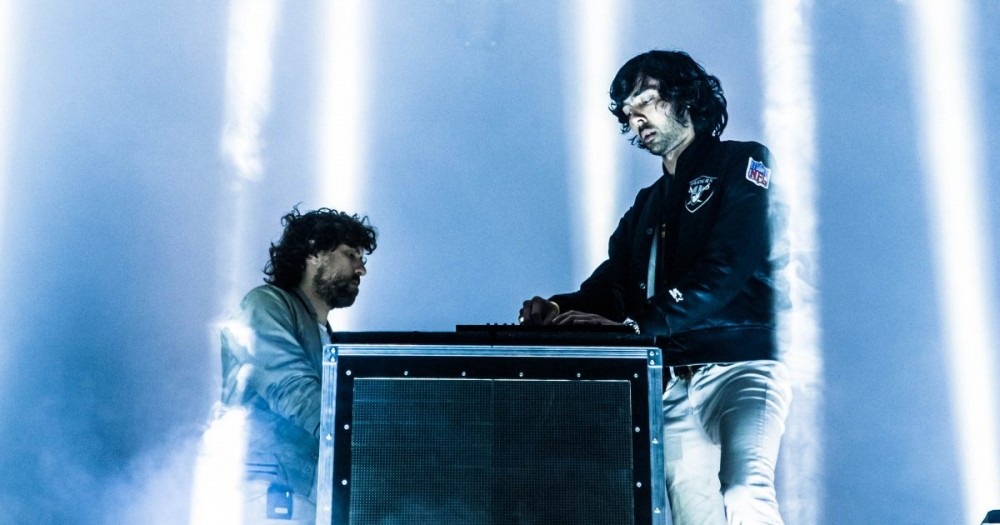 Justice are returning to Australia for Sydney City Limits this month. .

Xavier de Rosnay, one-half electro legendaries known as Justice, recalls the birth his game-changing musicianship in the most blazé terms.

In Paris, 2002, two graphic designers walked into a party. Xavier De Ronsay and Gaspard Augé had a few mutual friends, who happened to run a record label, seeking tracks for a compilation. With an immediate connection, the pair decided to try their hand at making a song. That’s when they created their breakout single, We Are Your Friends – a feel-good, funk-filled, instant anthem that lost the remix contest, but won the attention Pedro Winter, director the newly founded Ed Banger Records, who boasted Daft Punk as former clients. One week later, they were in his fice, signing a record deal.

Fast forward 14 years and three albums, and Justice have flowed through sounds and styles, from cinematic disco, infused with rock, and futuristic gospel. Whilst having darted between styles, what’s constant is their knack for big melodies and undeniable groove – and it created something instantly legendary, and always unmistakably theirs. In their break out years, they smashed fans expectations to a pulp. 2005’s ‘Waters Nazareth’ was filled with distorted, electro synths, and rose with haunting rock chords. “We knew we wanted to make something that sounded like… Sunday service music, but a bit more dark and aggressive,” says Xavier. However, it’s successor, D.A.N.C.E, employed a children’s choir and an over-joyous disco pop sound. The message was clear – from Justice, all you can expect is anything and everything. Despite their humble demeanour, it was clear that both his and Gaspard’s creative visions are razor sharp.

There lies another constant, in their logo – a beefed up version the holy cross, that evolves in style across the three albums. A simple golden outline in the first, to a medieval stone, to metallic with a multi-coloured, holographic oil splatter on their most recent output, Woman. They are each striking, ominous, and a powerful representation that matches their powerful music. How did this duo manage to project their own meaning and brand onto the world’s most recognisable logo? “When we were making the record sleeve, we noticed that the ‘T’ was the centre letter ‘Justice’, and that it could be replaced by a cross. We really liked heavy-metal and rock style logo design, and we wanted to design the Justice logo in a similar way. We kept using it in all our artworks, and it just never left. It’s incredible when you think about it because it’s obviously not our logo. It’s Jesus Christ’s logo. It’s kind crazy, the way we managed to take this universal sign and own it a certain manner.”

Xavier ties this to the way that good music can unwillingly create a religion its own, in the way it brings creeds together – and how theirs intended to do just that. “We’re definitely not attached to religion in that we’re trying to be a Christian band or whatever. Everyone is welcome to our shows, course! But personally, I don’t think the symbol can be separated from religion, and that’s okay. The way we make our tracks is to have this kind religious feeling happening – in the way that we gather people. Music is one those things – especially when you play big venues – that can gather a lot people and make them all do the same thing, look in the same direction. That’s also a big point any religion.”

It’s most prominent in their 2016 fering, Woman, which fuses their hard electro debut, ‘†’ and the prog-rock follow up, ‘Audio, Video, Disco’ into one. With just a touch gospel. “Woman came from the idea choir music, but we wanted to create a futuristic gospel record, building on the base that we created with the two previous albums, we wanted to turn gospel sideways and do a lot new, interesting things. We like the power that’s created when you have 20 people singing the same line, as well as the sense anonymity. And we have nothing against solo singers, we’ve worked with plenty! But as a whole, we thought the choir brought a very powerful vibration to the music. You just don’t write the same top lines for one person as you do for 20. The top lines are more serious when you write for solo artists. Choirs make the music more sing-along, because the lyrics have to be simpler than when you write for a solo singer. ” It’s clear then, why they might choose not to credit their solo features within the names their songs, and mostly keep their lives – on and fline – to themselves. By maintaining ambiguity collaborators and some reservation in their existence outside music, they can present Justice as a single entity represented by their music alone, and as a culmination the voices many, rather than two.

Woman, like each the albums before it, was crafted with intention and precision to message. “We started making this record by writing a couple tunes and after we had some tracks written, we thought, “What do we need to make it exciting when you listen to it from the beginning to the end?” We generally start by deciding, “Okay now we’re gonna make the opening tracks,” so that’s when we made Safe and Sound. Every track has a double or an opposite on the record, so then we made the final track, Close Call. And then we start filling in the gaps.”

“We think that in an album you sometimes have to make songs that will have no public interest as singles, but they help move the narration the album onwards. Once we have 5 or 6 tracks, and we’ve begun to shape what the album looks like, that’s when we really start piecing it all together, making every song work together. We designed the album to have two halves, with Chorus as the peak in the middle, and then naturally the two sides the record appear.”

What results is an album many feel represents Justice at their ever-rising peak. The fusion disco and rock, electro and gospel, the organic and electronic instruments – it’s not exactly background music. It commands every bit your attention, to create a listen that can only be described as glorious. When I asked what artists and songs influenced their style, Xavier named “Video Killed The Radio Star” by The Boggles. “At the time they were very big in Paris – a duet, they were great musicians, but we loved that their music was more a statement what you could do when you use the studio as an instrument, and not just record what you have in mind at that moment. We use the studio as a third member the band. Our studio has a bit everything inside it. It’s a mix very old machines, very new things, cheap synthesisers, and very high-end equipment as well. If it’s good, we don’t care if it’s synthetic or analogue, old or cheap. We also use a lot traditional instruments, and then we use a lot digital processing.”

Later in the month, the pair will head down under for the first time in many, many years to perform at Sydney City Limits, a sister festival to SXSW. Their highly renowned live show is nothing less than what you’d expect from them. And they’re working on making it even better. “Right now we’re really working on the live shows, because we think there’s a lot things to do, that we produce when we play live! We still love albums and we still love making them, but that’s our focus for now.”

Justice will be performing at Sydney City Limits on the 24th February, and you can find more information.