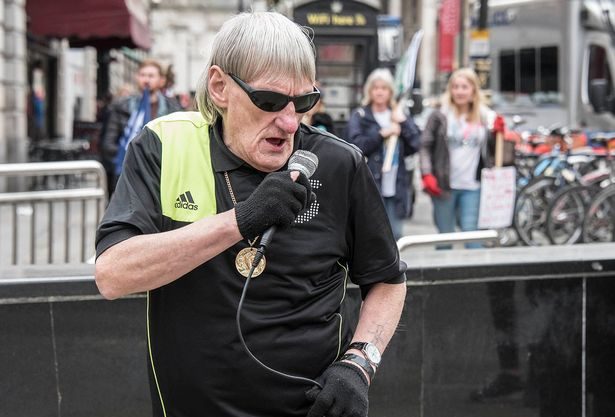 The X Factor star Ray Boddington has sadly passed away surrounded by family aged 77, after he was tragically hit by a tram on Wednesday.

Ray had briefly appeared on Britain’s Got Talent, and had also featured on daytime courtroom series Judge Rinder.

He had been on his way home from a pub in the Northern Quarter of Manchester, when he was struck by the tram at around 7:30pm.

He had been on life support following the incident, however his heartbroken family have now revealed that he has passed away in hospital.

His son Daniel told the Manchester Evening News: “All of his family were there, at his bed.

“My dad would have wanted everybody in Manchester to know that he loved them all.

Ray Boddington was known in Manchester for his busking [YouTube]

“I feel like my heart is shattered. I can’t describe the way it feels.”

Ray was also frontman of Manchester band the Piccadilly Rats, and was well known in the music circuit around the area.

The grandfather of 15 was known for his wild dance moves and regularly busked on the streets on Manchester.

Ray Boddington was tragically hit by a tram on Wednesday [YouTube]

He was left unhappy when the band failed to reach a second round of Britain’s Got Talent in 2012, despite one of the band members wearing a luminous green mankini.

Frontman Gaz Stanley told the MEN: “I am absolutely devastated. Over the years I have got really close to Ray he has ended up being like a brother to me.

“He is like a member of my family coming round to my house for tea with my kids and grandkids. He is really great and really well-liked. Even though I do the singing, Ray is the most popular by miles. He takes it so seriously – it is just great.”