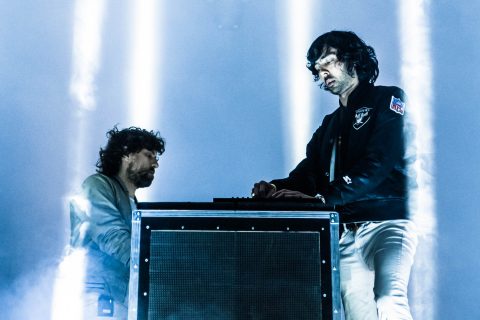 Justice have captured our attention this week with the release of a new music video/radio edit for ‘Stop’ from their 2016 album ‘Woman’,  and goods dont stop there.

The Parisian duo have been locked in to perform today at the annual Google I/O Conference taking place in Mountain View, California. So why should you, someone who is not in Mountain View. California today care? Well, as one might expect with a Google event, the entirety of Justice’s 90-min set – plus an earlier set from Phantogram – will be streamed live on YouTube.

For those keen to tune in, the schedule runs as follows:

On Wednesday, May 9, join us for an exciting night of music starting with Phantogram at 7:30PM PDT, followed by the main act Justice from 8:30-10PM. Justice, the French duo of Gaspard Augé and Xavier de Rosnay, are electronic music trailblazers renowned for recontextualizing the iconography and sonics of arena rock into a bombastic dance floor anthems. They just released their new single “Stop” which you’ll have the chance to hear at I/O!

So, if you were unlucky enough to miss Justice during there tie in Aus earlier this year, you’d better not miss this! You can stream the performances right “>here or below from tomorrow at 12:30pm AEST onwards.