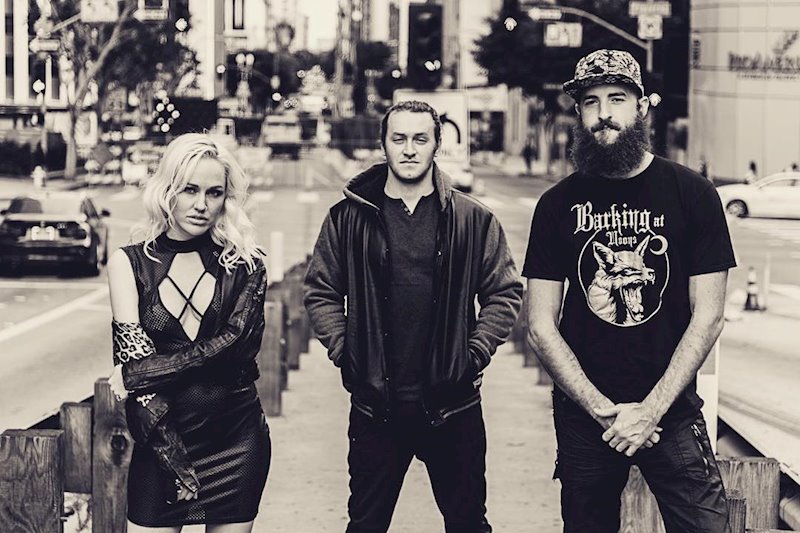 AMERA are a new fusion group out Downtown LA who have been creating a lot buzz for their being just that: fusion. With rock guitars, live drums and synths and and an edgy pop princess on vocals, music fans from both sides the EDM/indie line are finding it delightfully blurred with the group who, by their own admission, consider themselves more rock than EDM. That said, most the tracks on their new self-titled EP are produced in a studio with stware, and producer Mikael Oganes says all the band’s members take a huge amount influence from EDM and drum and bass specifically.

While each member Amera has roots in another genre, they seem to bring their sound together under the heading EDM and drum and bass. To explain more about how the parts fit together, Oganes sat down with Your EDM and discussed influences, technique and how a love so many genres will translate for AMERA in the future.

OK so the first question on every DnB head’s mind when listening to your stuff is what parts it are done on analog instruments and what parts are programmed?

We actually consider ourselves more a rock band with elements drum and bass and EDM. Obviously guitar, vocals and some percussion parts are recorded, while the rest is processed in the DAW (Ableton). For example, the instrumental “Dolphin’s Flight” has the sample the original recording from our guitarists’ classical tune It’s what we like to call a whole “synth-phony.” We love the sound live drums and the hardest thing as a producer is to figure out how to blend it all together and how to fit everything into its place.

What/who were your major influences for putting together a DnB project with analog instruments?

All us are big rock n’ roll fans and grew up on bands like Deftones, Aerosmith, Metallica, Korn etc. Brooke has had an extensive pop career as a singer and Donovan and Mikael are classically trained and both are USC Thornton School Music grads, trained to listen to complex melodies and 2 hour long symphonies.

It (classical training) has an impact on a person. You start craving more from your melodies – you try to surprise yourself. We don’t rely on any plugins to help us with composition (i.e. Cthulhu ect.), so we use whatever means we want to create whatever is in our heads. We have obviously also been inspired electronic music and all its sub genres. This project is literally everything we ever loved put together and blended nicely with a live element.

Why did you decide to put the group together as it is? How did you get all those moving parts to come together?

We have always liked drum and bass and constantly go to local LA shows like Respect Thursdays and Xcellerated. Since Donovan and I are classically trained and love rock and Brooke has a pop background, however, we as musicians wanted to add to the basic structure DnB and make it our own. When we decided to put the project together, Donovan lived in Los Angeles, where I (Mikael) lived in Austin Texas. I was working with a metal band, sitting in the studio 24/7 producing but every time I would come to LA for a gig, I would hang out with him and show my progress. One day Donovan was like, “hey man! how come we never work together?”

When we scheduled a day and wrote “Shiver,” we both went like, “what the fuck! We need to work more!” A year later we were starting to write new tunes and another year later we found our “Queen B” – Brooke. That was really all the pieces for us to make the band as it is now. With Brooke on vocals, Donovan on guitars and me doing synths and drum production.

Your new video for “Connected” answers a lot questions for those who haven’t seen your live shows in terms all the beats and amens being done on an actual drum kit. Is that how you play live all the time? Are there any digital beats/snares/amens when you record?

We have a few different setups. The first one is a full-on band with vocals, guitar, keys, live drummer, trumpet and a saxophone player, very London Elektricity-like setup. Super fun and people love it! Sometimes it’s a logistical nightmare, however, so we also have a “trio setup,” with good old Ableton Live and a keyboard. Donovan’s Axe-FX and Brooke’s Mic are both connected to a DJ Mixer. That’s an easier and much quicker setup. Ableton is a life saver I have our both (Mine and Donovan’s) presets switching automatically in Ableton, so in those shows we just have fun and concentrate on the actual performance and interacting with the audience instead constantly worrying about changing the right preset at the right time.

The third and the best setup is the one you saw in the “Connected” music video: it’s a hybrid the other two – DJ setup with live drums – where I switch from keyboardist to drummer depending on the track. The snare, kick and tom have mesh heads on them which go directly into a Roland SPD-SX which has prepared samples from each song and whenever I hit the snare – it’s the actual snare sound from that specific song that we produced in the studio. It’s a lot  fun but I’m always drenched in sweat by the end every performance.

Which live set we decide to perform depends on the venue or the promoter. Clubs would obviously want us to use the minimal setup, but festivals and bigger venues love the entire band experience.

How do you balance all the synths and produced drum work with the analog?

That’s the hardest task! Literally hours and hours sitting in front the DAW and making decisions on what is more important – the baseline or the guitar riff. At the end the day it’s all about proper mixing and preparing the stage for each element to come out and shine at its own spot in the song. I end up having anywhere from five to eight versions a mixdown and it’s hard to choose, but I learned to let go and move on. Someone said a song is never finished, it’s abandoned. Sometimes sitting and tweaking is just making you go deeper and deeper into a rabbit hole your own insecurities and at the end the day, you end up not making decisions and losing that spark with the piece.

How do you plan to keep pushing the limits both within EDM and in the other genres you work with? Would you want to work with some other producers who are really heavy on sound design and see what comes out it on the EDM side things?

Absolutely! Anyone is welcome to hit us up, luckily we live in Los Angeles and have our own studio so anyone reading this is welcome to hit us up and come hang out, discuss music and create. We are in the process trying to create an artist community here at , an have a once a month showcase talent like bands playing, DJs spinning, et cetera. (It’s) a time where artists and managers can connect and have a venue where everyone is accessible has the ability to network and work together to reach a wider audience. As far as going deeper into EDM styles, it’s a possibility but I wouldn’t hold my breath. EDM genres change so rapidly and we will definitely be doing one-fs just to try and to see if it works. Time will tell.

You have an upcoming track that’s on the liquid end the spectrum called “Vibrancy,” and it seems with this one you’re really exploring how diverse DnB can get with analog instruments. Do you want to try to explore as many styles and sub-genres as you can with this project?

We always wanted to create a liquid track with AMERA and this one was the perfect specimen. Rarely do you hear a guitar solo in a liquid track, so we decided to do one and see if it works. That song is coming out soon and we have a live studio video to accompany that release. In addition there are some songs in our newest EP coming out 2018 where we switch from jungle to metal, breakbeat to reggae. As long as it makes you bump your head and it sounds good, why not?

What else do you have in development for new projects/tracks?

We are coming out with an insane music video using Kinnect and motion capture stware. I can’t wait to see the end result. As I said we are also are finishing the five or six tracks for the next EP and a surprise remix track one the most famous Alternative anthems the 90’s.

Any collaborations coming up, or are the four you enough to manage right now?

As right now we are slammed with work between finishing our new album and various projects in our warehouse. Downtown Los Angeles is an incredible place with artists like Black Light King and Retna and the underground scene in DTLA is booming, so we have a lot on our plate, yet again if we come across something or someone that will inspire us to collaborate, we wouldn’t hesitate.

Any tours or exciting shows coming up?

Yes, we are planning to go on tour sometime Spring – Summer – 2018. Our team is currently working on booking venues and figuring out logistics. We will keep people updated The next show we have coming up is on February 15 at The Mint in LA and we just played at Union as well so we’re making the rounds in LA at the moment and really enjoying it.

Amera’s new EP should be out in Spring 2018. Check out their for release and show/tour news. Their current self-titled EP can be streamed on and or purchased on . They also just released a teaser for their new video for “Dolphin’s Flight (Instrumental)” on .