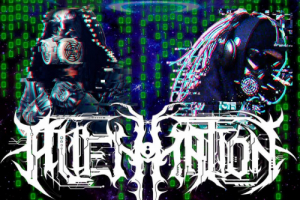 Hello Alien:Nation and welcome to Brutal Resonance! Let’s do a warm-up question. What are three of your favorite albums of all time and why?
Hexpyware:  Hi Brutal Resonance. Thank you very much for the invitation, it is a great pleasure to belong to the same dimension.
Cryptopsy’s “None So Vile” (1996): Technicality, speed, brutality and originality. At first glance this album from its visual character is impressive, and in general it perfectly translates the technical brutality of this great album that marked a before and after the music I was listening to. It is difficult to choose only three albums, but this would be one of my big favorites.
Aphex Twin’s “Selected Ambient Works” (1992): On the electronic side, I came from hearing artists like Jeff Mills, The Prodigy, Kraftwerk, Einstürzende Neubauten, among other greats. Mr. Richard D. James aka Aphex Twin, exploited my brain in a unique way with this great album, generating an amalgam of sensations like never before in any other album. This album is a pillar of IDM and experimental music in general. I place it in this top since its solid and spatial sound to this day continues to be of great influence.
The Faceless’ “Planetary Duality” (2008): The Faceless, is a fairly current band, but with a fairly solid sound and with technicality adopted from bands like Necrophagist and Spawns of Possession, but in this album it brings together so many things that generated new sensations for me, from the influences of jazz, mixed with the most extreme brutality and technicality of death metal, mixed with a mystical aura. with extradimensional theme. Overall it is a good journey of brutality, technicality, astral projections, and is a big modern technical death metal reference.
Exo-phantom:  Pantera’s “Power Metal”: Since I met this band back in the day, I got stunned by them. From my point of view, they’re the best band worldwide hands down. This album in particular is full of energy. The guitar riffs / solos and vocals are the things I highlight the most. I think I fell in love with that album because there’s a video on the internet when Pantera performed a concert in Texas on ’88, they played most of the songs on this album, and the way they performed that is just perfect.
Deicide’s “When Satan Lives”: Well, I am a die-hard fan of Deicide since always. The first time I listened to it, it blew my mind to another dimension. I mean, the way they execute the songs from previous albums is just impeccable, Glen’s voice is brutal, and the overall sound is extreme. I just love it.
Fornicatus’ “Omnis Animalis Terminus”: This Finnish band is very underground. The dude behind that project managed to make an outstanding DSBM work with this album. Actually, I love‘em all, but as I was limited to just pick three albums, there you go. I just love the way he sings, the melodies and that raw sound to me is beyond catchy. The atmosphere of this Fornicatus band is damn great and unique.
How did you two meet each other?

Hexpyware:   A few holographic lifetimes ago, from the high school years, on some parallel dimensional plane.

You are influenced by science fiction. What are some works that you constantly draw upon for your music?

Hexpyware:  The movies of the Alien saga for example, cyberpunk movies like Akira, Animatrix, Ghost in the Shell, Paprika, Metropolis, and too much horror of the 80’s; snuff and series-b movies.

You mix the likes of industrial, black metal, and harsh EBM into one sound. Do you ever find it hard to blend all these sounds together?

Exo-phantom:   More than being hard to mix them all into our sound, it’s all about to know how to pick the right ingredients for each song and what you want to transmit with them. Once you have clear what you want to achieve, you just go for it by choosing the right sounds and putting your soul on them. It’s all about expressing the soul, or the voice of the soul.

You have a new EP out. What could I anticipate?
Hexpyware:  It will be a big blackened surprise from a lot of dark electro, aggrotech from hellish space, expect us.
You have a lot of collaborations on the album. Tell me about the musicians you worked with and how you did it.
Hexpyware:  Most of the time they are great friends around the planet, who listen to the project, and have wanted to collaborate with us in some way to experience new things, we have already had the opportunity to work with excellent projects that have influenced our current sound, generating a brutal result.

On the second disc, you have an original song as well as a bunch of remixes. Why did you choose to put ‘Misanthropic Affection’ on disc two instead of keeping it on the first disc?

Exo-phantom:  Nothing special about it, the song itself is not being misanthropic with the other ones, or is it? In fact, I guess we chose that because it would be side by side with its remixes.

Out of all the songs on “Extraterrestrial Bios Systemshell”, which is your favorite and why?

Exo-phantom:  My favorite would be “Invocacion a las tinieblas”. I just feel a deep connection with it, and being the one who created the lyrics on it, that would a perfect description of my vision of the left hand path and how the spirit world or the other side has manifested throughout all the time I’ve been involved into the spiritual paths. Beyond that, I just love the melodies on that one as well.

Hexpyware:  It is difficult to choose just one, but I feel that several have that mystical and hypnotic touch that I like, “Malignant Malware” is one of my favorites, but definitely writing “Blasphemous Alientech Warfare” was spectacular, I just let myself be guided by the energies, and the letter was emerging like black magic. Finding that point of our influences, death metal and blackened death, and being able to merge them with our electronic sound, is something brutal, the result is brutal and overwhelming.
Do you have anything else planned for 2021? Any new singles, EPs, remixes, live shows, etc.?

Exo-phantom:  Absolutely, we’re going for more. Alien:Nation has a strong projection to make more music, getting better and better, exploring more sounds, more atmospheres, and different production techniques, as well as themes or topics in our lyrics and concept of the band. We are clear in that we don’t dig putting out ten releases each year like other bands may do. We respect project / bands that do that, but we don’t consider that for Alien:Nation. We like to take our time to release something really good, or at least, something that we think is good. As far as remixes are concerned, we’re always open to collaborate with bands we dig, anytime.

Lastly, I would like to thank you for your time. I wish you the best of luck and leave the space below open for you to mention anything I may have missed!

Exo-phantom:  We really appreciate you have developed this interview to us, it’s a TRUE honor, we certainly hope you guys continue supporting the band, the scene, and the music as you’ve been doing so far. Thanks a lot.
Hexpyware:  We thank all the people who support and are waiting for our new releases, it is an honor to continue doing this, and that you devour and enjoy Alien:Nation, and to you for the interview, until next time!