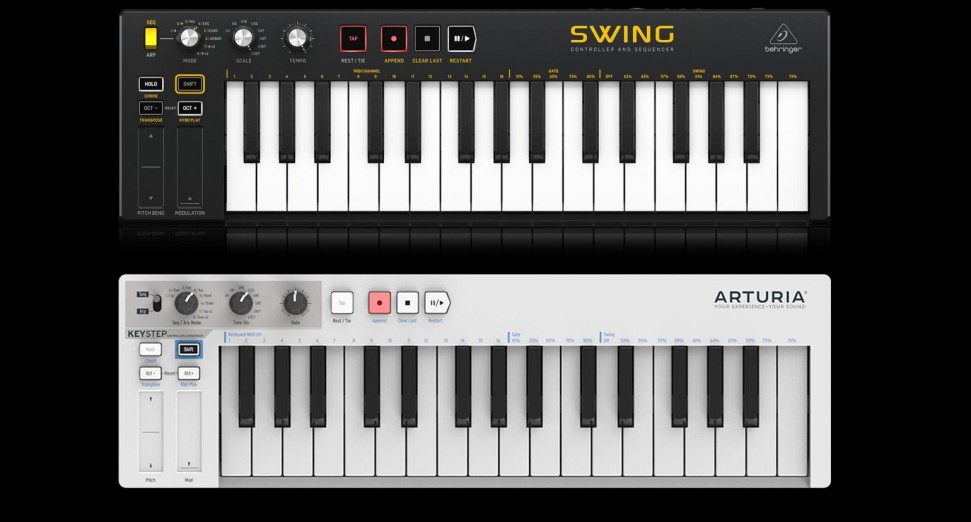 Behringer is under fire again, this time for allegedly copying the design of the Arturia KeyStep with their new product Swing. Behringer’s MIDI controller has identical form factor to the KeyStep including buttons, knobs, switches and even outputs all in the same position.

Arturia released a statement clarifying that the product was not a collaboration between the two companies, and that “of course we accept competition, and would absolutely understand that Behinger give [sic] their own interpretation of a small and smart controller that would also be a sequencer. Others do, we have no problem with that and see good for the customer, as well as for the industry, in fair competition. But this is not fair competition here.” Arturia also posted a picture of the Swing with the caption ‘Seriously?’ on their Facebook page.

Some mused that the design may have been bought from the same company that designed Arturia’s version, but the co-founder of DesignBox, a musical instruments interface design company who’s worked with Moog, Waldrof and of course, Arturia. Axel Hartmann said: “Personally, I feel sad, and am also upset about that sheer copy of a design, that I once created for, and together with Arturia, the team around Frederic Brun. These people have spent lots of efforts and great energy in building a brand and all that belongs to a brands assets. It is simply not right, somebody else is taking advantage of that hard work.”

It’s not the first time Behringer has been criticised for its clones and design similarities, and while many defend their affordable re-creation of analogue synths that cost £1,000s on the second-hand market, it’s less clear the purpose behind cloning a piece of kit that’s already affordable. The Swing costs £99, while the KeyStep is currently priced at £91 on Thomann. Behringer has yet to respond to Arturia’s statement.