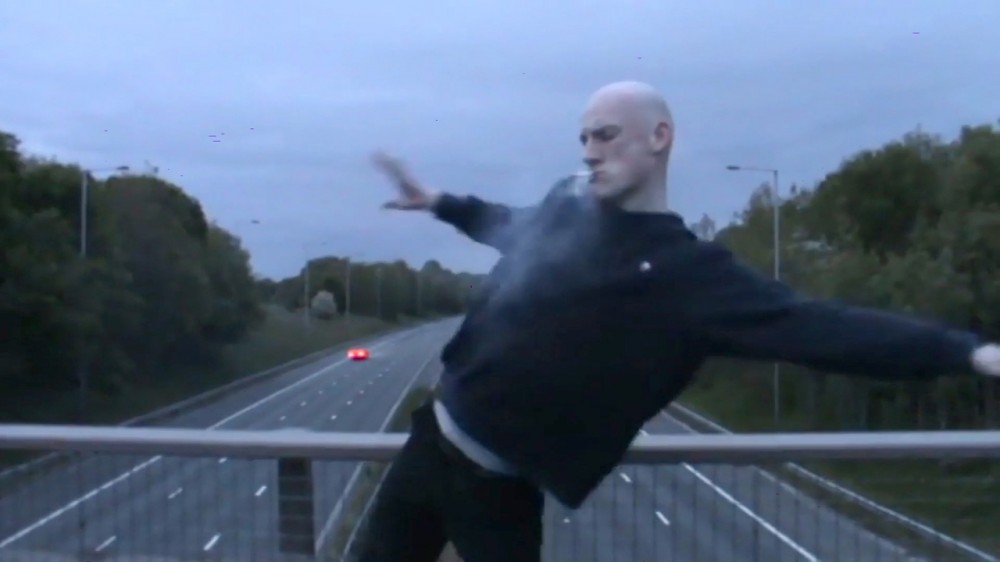 Industrial machine poetry broadcast from a lonely bridge over the M65.

Tom Heyes understands boredom to be a potent creative catalyst. Seeking poetry in the pale, grey landscapes he grew up surrounded by, pulling words, movement and feeling from this all-pervasive void of tedium has become central to his wide-ranging art practice. Blackhaine provides Heyes with a means of exploring these in-between places, a suit of armour he can put on that allows him to remain in the tedium and to attempt to speak its name.

Filmed back in May of last year, on the night that yet another national lockdown was first announced across England, Transmission can be understood as just one of Blackhaine’s broadcasts from nowhere, a black box recording from the wreckage of his own body on the M65. Whilst on location in Blackburn, Lancashire, conducting research for a solo piece entitled FOUR THOUSAND HOLES IN BLACKBURN, Heyes went out onto a bridge stretching over the motorway for an impromptu performance.

Standing on the precipice, drifting across “M65 lanes”, through “steel town smoke” and over “trains and steel that vibrates”, with Transmission, Heyes weaves together a kind of industrial machine poetry, his double-tracked vocals stretching and contracting, squeezed under chilly dub pressure. The machinic drive of his words is made manifest in the monotonous delivery of a text-to-speech program, which Heyes uses to cloak his most lyrical passages.

Gesturing towards an oppressive and totalising mode of automation, he feeds his own weary reports of “the sons of tin men driving cars made of tin to work in their tin factories” back into the machine. “The machine allows me to say things I don’t feel like I could,” he explains. “Do you still miss me?” the machine responds. “Want to know how it feels.”

Transmission was made in collaboration with All Choreographers Are Bastards, a collective founded in Manchester in 2018 that includes the artists Joseph Reay-Reid (Bruxism), Joss Carter, Louis Ellis, Nathan Goodman, Sam Brown, Liam Morgan, Tim Merrifield and Blackhaine himself. Heyes describes ACAB as “a deconstructive project”, with Transmission existing as a product of their subversive approach to group art practice.

Blackhaine translates the grain and grit of his words into convulsive, spasmodic movements, pairing his comedown poetics with a stilted and strung-out kind of dance. Pulling his skin taught over bones, sinew and muscle, he is rigor mortis in motion, jerking to the off-beat against the jagged texture of his verse. “I was reading a lot of Ginsberg at the time,” he coyly explains, “I think it shows.”

The transmission begins and ends with darkness, blurry footage of the M65 and a cold, piercing drone. Heralded with a final exhalation, the work begins and ends with Blackhaine broadcasting from the tedious void into which he has fallen, eschewing romanticised narrative in order to transform grey boredom into a black, visceral proclamation: “I stand here motionless as the sky opens up again revealing nothing urgent, surreal, or of meaning.”

Transmission (Nothing Urgent, Surreal, or of Meaning) Credits:

Transmission (Nothing Urgent, Surreal, or of Meaning) Lyrics:

In a cold dark metal place
The rain leaves scars on my face
Restless, I roam the streets at night in a daze
Staring at bodies with no figure in mindless states
That retreats like terminal patients that wait
And lay in beds wrapped in sheets of slate
Housewives clutched in permanent states
As salt water rolls down their head into eyes that bay
My eyes red as corridors ascend
M65 lanes
Passenger seat suffocates my blade
As I’m woken up by trains and steel that vibrates
My bed as I’m laid on this tray

Do you miss me
Do you still miss me

Do you miss me

Surrounded by these men with shadows in there hearts and teeth Suffocating beliefs through the window
Her mothers broken arms never held me close
Armoured up in a Honda Accord
The lamps on the street like a veil in my eyes
On the moors where the pale one arrive
Baptised in the scent of dogs and poor men
Preston Blackburn M65
Each corridor laid with mines
And ghosts wrapped up in my movements blind
Emotions drowned left undisguised
And the sheets in my bed like chains
And I pray that the bitch won!t hit me again
As I drive through the valleys that made of towers and flats
And the rain turn black in the country
The rooms that we slept in falling apart
Through the day and the dark
And she stayed in my arms