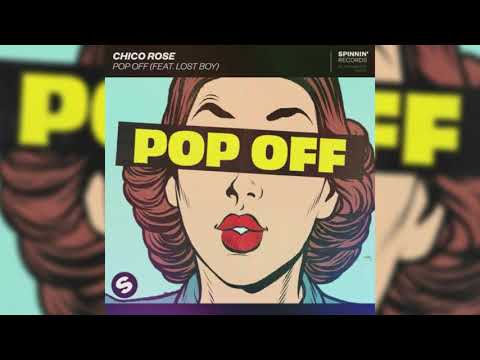 Dutch DJ/producer Chico Rose has seen an incredible rise to fame these last years. Often teaming up with mentor Afrojack, with whom he reached a climax in 2019 when the guys released ‘Sad’, a hit record that by now counts over 81 million Spotify streams and over 6,8 million views on YouTube, he’s followed up on this with multiple hit records.

2020 saw him undertake more Afrojack collabs in the shape of popular tunes ‘Cloud 9’ and ‘Speechless’ (both released on Afrojack’s own Wall Recordings), while Chico Rose also released his second-biggest hit to date: ‘Somebody’s Watching Me’, a team up with 71Digits.

After recently revamping 90’s hip hop classic ‘I Got 5 On It’ together with Steff Da Campo and 71Digits, again resulting in millions of streams, Chico Rose now continues with this hip-hop-infused sound.

‘Pop Off’ brings us straight back to contemporary sounds, though, working up momentum with the rousing vocal lines of US songwriter/producer Lost Boy. From the start, he’s playing catch with his vocals, describing naughty scenes in the club, while dark bass chords underline the slick atmosphere. When the chorus drops, the beats kick in, setting the whole tune in motion, letting Lost Boy proclaim he ‘can’t get enough’, continuously making moves in this feverish club setting.

As if he’s trying to spice up the summer season, Chico Rose has made another fresh move again. Better take that ‘Pop Off’, cause things are about to heat up when this baby drops!

“We are very happy to release Pop Off! The vocals from Lost Boy are amazing and we think we found the perfect crossover from rap and house.” – Chico Rose

“Pop Off was written initially as a total love letter to the club R&b of the 90’s 2000’s. Me and Dan Edinberg really built it from the ground up and it resulted in something so unique and special. Chico Rose took the production to a place I’ve never heard and I’m so thankful for his touch, it made the whole song larger than life. All I want is for people to move to this one!” – Lost Boy