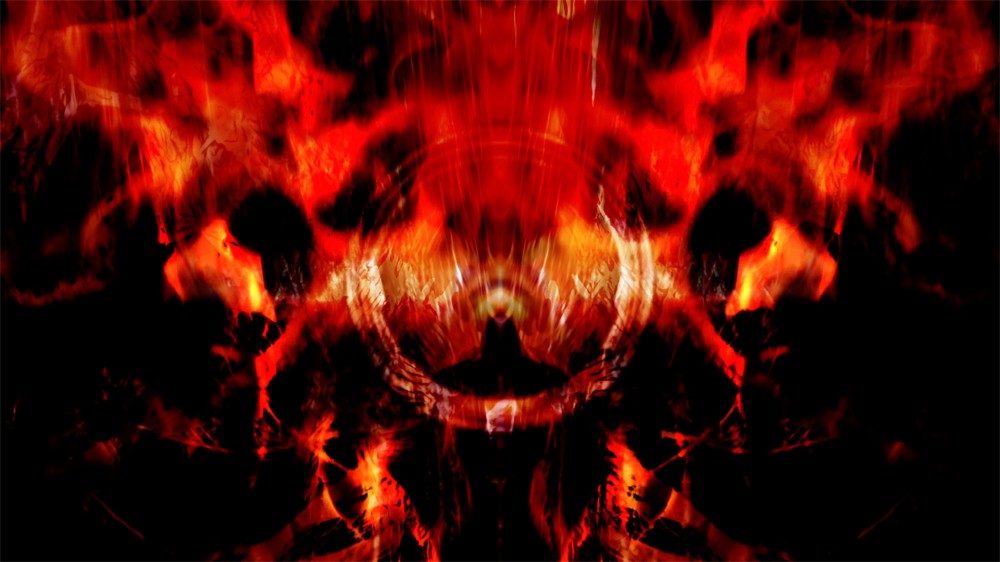 A nightmarish, seething response to the catastrophic effects of the COVID-19 pandemic in New York City.

Experimental filmmaker, musician and multimedia artist Edward Quist, who makes work under the alias embryoroom, imagines New York City as a shadowy hellscape in his latest feature presentation, Ravaged By The Sun (American Cannibalism). Developed over the course of the last year with various live lockdown screenings on social media, the expansive audiovisual work weaves together stroboscopic video montage, CGI and a seething score of pitch-black techno and chilly electronics to paint a nightmarish picture of an alternate reality that draws inspiration from the very real anguish and trauma of life under lockdown.

“Produced during and influenced by New York’s catastrophic pandemic year, the project bears the scars of our haunted time,” writes collaborator and cultural theorist Alexei Monroe. “It’s a dystopian near-future scenario that’s become entangled with the present. In the story the Coney Island amusement park has become a concentration camp in which bio-engineered zombies guard prisoners that will be harvested. The iconic Empire State Building acts as a relay antenna for a “death signal” that helps maintain order in a totalitarian America led by shadowy controllers – the Nine Ministers of the Dictatorship.”

Blurring the lines between reality and fiction, Ravaged By The Sun (American Cannibalism) is a horrific reflection of contemporary times, a schlocky interrogation of American politics, collective responses to COVID-19 and the surreal experiences of living through a global pandemic. While dressed in the trappings of horror and exploitation cinema, the underlying dread that runs in a dark vein through the entire film is something all of us have experienced in various ways over the last year. Quist’s densely-layered imagery, paired with the surging percussion and bleak drones of his score, is presented as a vivid manifestation of quotidian anxiety, a cathartic plunge into a chthonic void of spiritual turmoil and distress.

Of Quist’s influences, Alexei Monroe writes: “Informed by and reminiscent of sources such as 1960s pop art and experimental video, 1970s Doctor Who and electronica, Ravaged By The Sun (American Cannibalism) is a viral collage, haunted by nightmarish organic forms and demonic digital forms that seem as if they might ‘cross over’ into reality at any second. Its signals exercise the viewer’s synapses intensely, immersing them in what Quist calls a ‘cathode ray forest’.” The film also features architectural design from Paul Stein and appearances from artist John Duncan and Nissim Uriel, as well as musical contributions from Paul Kendall and Karpinski.

embryoroom’s unsettling score for Ravaged By The Sun (American Cannibalism) is out now, you can find the soundtrack, alongside a remix compilation, HyperCannibalization, at the embryoroom Bandcamp.