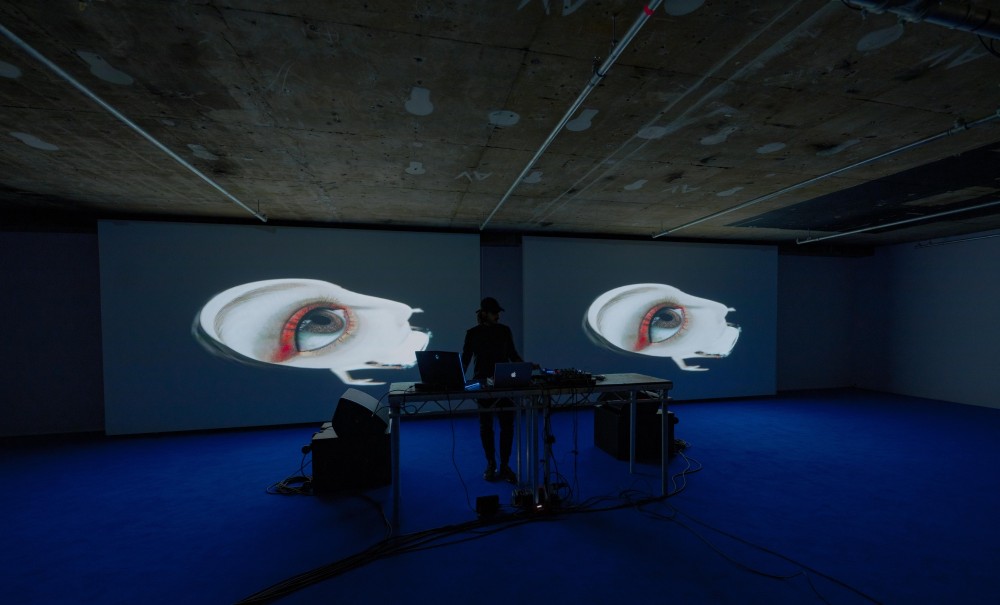 A live performance of Koosha’s latest mixtape, which explores the “hallucination of a machine,” with visuals by Isabella Winthrop.

On this week’s Fact Residency, we explore the work of Ash Koosha, a British-Iranian multi-disciplinary artist, producer, entrepreneur and futurist whose practice has constantly sought to innovate through the exploration of technologies including virtual reality and artificial intelligence.

Koosha, whose music has been released through Olde English Spelling Bee and Ninja Tune, begins by presenting a performance of his latest mixtape, HALLUCiNATO, which arrives on December 10. Filmed as part of our Fact Live series at 180 The Strand, the set features visuals by collaborator Isabella Winthrop, with a concept described as “a machine hallucinating in multi-sensory audio visual narratives.”

Koosha’s interest in the idea that “if humans can dream, computers can too” has led to discoveries around machine-hallucination through data and sampling. He envisions a future where “music creates and recreates itself making all of us humans observers and curators rather than labourers of art”. His research led him to start Auxuman, a company dedicated to exploring AI’s applications in music and the creation of “digital humans” for creative purposes, such as YONA.

HALLUCiNATO is comprised of samples, sequences and melodies that were generated by Koosha over the past two years, prepared for performance, with the arrangement finalised when mixed live for the session. Koosha’s idea was to run audio-visual sources that are sequentially harmonised and mixed based on his previous methods and preferences.

“We all dream when we sleep, but only a handful of us render these imaginations into audio-visual material that others can experience,” Koosha explains of HALLUCiNATO. “This ability to express our imagination through material output such as audio or video requires years of learning, practice and craft building, which is known as the labour part of creativity.”

“For years we have overvalued the ones with these abilities who went through the suffering of learning, practicing and performing, while undervaluing the audiences, who could only express through enjoyment, taste, selection and collection of these audio visual materials.”

“Ego in art was born through this dynamic and grew into industries and capitalisation machines, feeding off of our mission to prove our worth to the world and to claim our higher position as ‘creatives.’”

“Now imagine if the process of labour didn’t exist. If we could push one button and an entity, who knows us well enough, would spit out 30 minutes of musical masterpiece or 10 movie scenes with the best storyline, dialogue and soundtrack. Then all we had to do, any of us, was to select the ones we think work best and put them together. We could share them with friends, sell them on Bandcamp or apply to a film festival. We could win a Palme d’Or (OK, maybe not!) and then go back to enjoy life without the pressure of making our next album (which would emotionally and physically take at least a good year) just because our career depends on it.”

“Previously that single ‘push the button’ moment, if done manually, would cost us time and if we are not those people who truthfully enjoy the process or missed out on the window of creativity in our early years, then we need a creative AI friend/assistant/helper.”

“We have already begun the process of automation. Splice is a good example where you take chunks of music and collage them into new forms with many plugins available for manipulation. Spotify playlisting is, on the other hand, teaching people to be a taste person, by understanding and choosing moods and sharing their selection abilities with others. These are only two examples of many micro behaviours that will change our future.”

“HALLUCiNATO looks at the hallucination of a machine and the curation or process of selection by me, a human. It explores the idea of zero-labour music through my collaboration with Neural Networks, data sets, arrangement systems and automated performances. The mission is to find value in the art of selection, taste and collage. To put it into honest and direct words, to kill the ego of the artist as we know it and to give every human a chance to express.”

HALLUCiNATO will be released on December 10, and will be available on Bandcamp and streaming services.