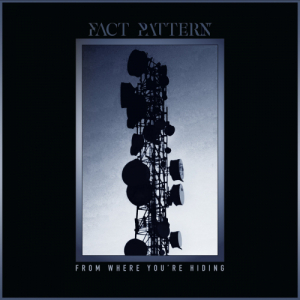 For the past couple of years Fact Pattern has been on my radar. While several iterations of the project has existed in various stages of evolution, the primary one that I knew was the doom metal inspired band that I was introduced to in late 2018. However, three years is a long time for a creative spirit to experiment and nail down a particular sound. And nail down a particular sound that is their own is what the trio has done with their latest EP and label debut on Re:Mission Entertainment, “From Where You’re Hiding”. The seven track release takes me through a menagerie of cold electronics, guitars that still call to their roots, and an overall industrial vibe.

I was thrust into equal parts electronic and guitar riffs with the start of ‘Visitor Detection’ the first time I hit the play button for “From Where You’re Hiding”. It’s not long before an almost EBM-like bassline is formed through the drums; the vocals are crisp and clear with a bit of an echo behind them. Various electronic samples hit throughout the album as well as glitch effects; the synths around the one-minute and thirty-second mark just add an extra layer of synthetic bliss. Fact Pattern understand the importance of a mix where each layer is distinct without ever blitzing into one another.

Noise rock is the primary focus on the following song, ‘Appendage’. However, it never flies into the dirtier parts of the genre with muddied mixing and the like; rather, Fact Pattern uses the grittiness of their guitars and the destructive nature of their electronics to great results without ever sacrificing quality. ‘Retrofit’ hit in next. This two-minute and twenty-two second song is an instrumental. But, like their previous efforts, Fact Pattern keeps the rhythm moving constantly. Electronic notes begin off the song before stomping drums and ear-nerving screeches come into the forefront. Slowly, guitars make their way into the mix before a full-on beat makes itself known. ‘Retrofit’ has a creeping sensation, to say the very least, and I adore it.

So to speak, ‘Generating Keys’ is a tame song in comparison to the rest on the EP. Fact Pattern definitely turns to their doom metal roots for it without much room for electronics. While not necessarily a bad thing as the track is very well mixed and mastered, it does come off as much more lean and straightforward than the others. The final song on the album is titled ‘Retail Therapy’. This rapid fire song utilizes the kick drums to phenomenal effect as whirring electronics dance beneath them. It’s truly wonderful seeing how well pulled off Fact Pattern’s brand of industrial metal has become.

“From Where You’re Hiding” is a brilliant EP that’s almost begging to be expanded into a full-length album. Whether or not that happens, or if Fact Pattern continues to release smaller EPs in their career, I’m sure what we’ll get will be phenomenal. “From Where You’re Hiding” also contains two bonus tracks on the CD version, remixes from Black Magnet and Dread Risks. It’s a gift that keeps on giving. Eight out of ten!