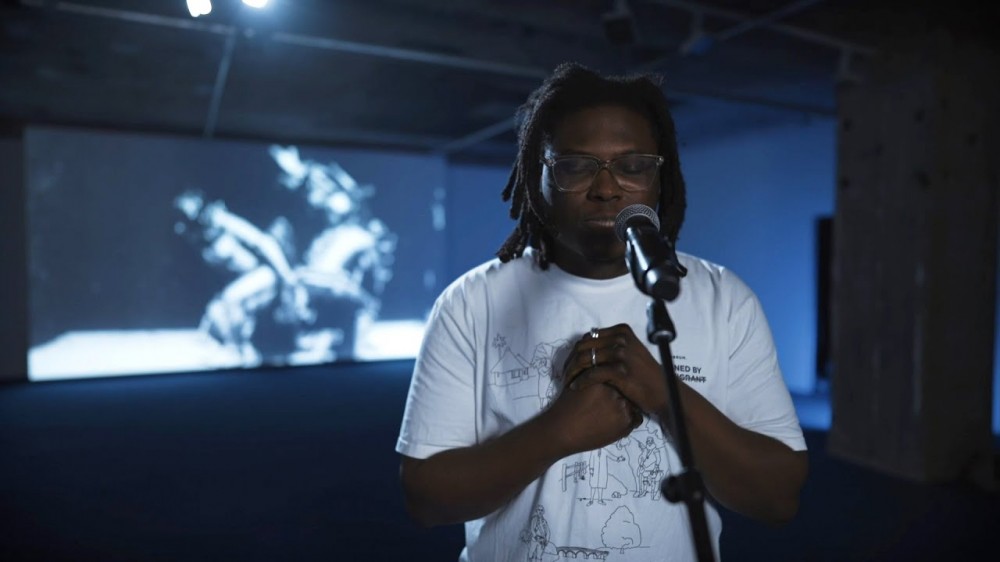 Julianknxx traces an expansive and ongoing conversation between the many voices, past and present, that make up the cultural patchwork of his life.

In her beautiful and devastating 2016 book In The Wake: On Blackness and Being, scholar Christina Sharpe delivers a stark rallying cry: “We must think about Black flesh, Black optics, and ways of producing enfleshed work.” Drawing inspiration and strength from Sharpe’s words, interdisciplinary poet Julianknxx brings together sound, image and performance in a discursive, enfleshed poetic practice. His work is deeply connected both to the foundational stories and languages of his birth place of Freetown, Sierra Leone, and to the sounds and voices of his current home in London. It is the passage between these places, and their twin histories of conflict and colonialism, that the poet seeks to document, penning what he calls a “history from below.”

For his Fact Residency, which coincides with his artist residency at 180 The Strand, the poet selected a line from his stunning visual poem In Praise Of Still Boys, “you are what’s left of us”, as a lens through which to consider the world left in the wake of a global pandemic. Thus “you are what’s left of us” becomes We Are What’s Left Us, as Julianknxx takes stock of his friends and family, his collaborators and influences, as he traces an expansive and ongoing conversation between the many voices, past and present, that make up the cultural patchwork of his life. “What are we holding?” he asks. “The air is different now, we need to think about how we breathe.”

The act of breathing is politically and socially charged in 2021, whether it’s omnipresent paranoia surrounding the air we share with those around us in the time of COVID-19, or the breath George Floyd, Eric Garner, Elijah McClain and countless others were cheated out of at the hands of violent police officers, or the extreme air pollution that claimed the life of Ella Adoo-Kissi-Debrah. “We have to breathe differently,” reflects the poet, “so this is what’s left of us.”

Julianknxx’s investigation and activation of these various different contexts for breathing can be understood in the terms of Christina Sharpe’s formulation of ‘aspiration’, which she in part defines as “what it takes, in the midst of the singularity, the virulent antiblackness everywhere and always remotivated, to keep breath in the Black body.” Coding it as a form of “wake work”, the “hard emotional, physical and intellectual work” required from those living in the wake of “the still unfolding aftermaths of Atlantic chattel slavery,” Sharpe identifies aspiration as a primary strategy for Black bodies moving in spaces that are structured against them. Like Julianknxx, Sharpe understands “the necessity of breath, to breathing space, to the breathtaking spaces in the wake in which we live.” What the poet outlines as a commonality in those left in the wake is an appreciation of this necessity to breathe differently, as well as the power of the speech and song formed by these breaths.

Enlisting the talents of producer Happy Cat Jay and the Zimbabwe-born, London-based soul musician THABO, in Basement, Julianknxx leads an urgent performance of two poems, Black Room and Britannia. Each is underpinned by a shuffling, melancholic instrumental that samples the vocals of Afrika Mamas, a seven-piece, Zulu folk acapella ensemble made up of single mothers living in Durban, South Africa. Elements of their track ‘Thula Sana’, a traditional Zulu lullaby, are woven into the performance, a cathartic balm to the poet’s words of crisis. Each poem featured in Basement represents a reification of an aspect of Black experiences in Britain, a struggle through an environment that is in so many different ways structured in opposition to the lives of immigrant families. His collaborative performance charts the process of drawing life force from his ancestral pool in times of need. “There’s a real neglect of foundational stories, foundational language,” he says of the piece, positioning these elements as sources of power for his performance.

In Black Room, the poet contrasts a “black room / black art / many black dialects” with those “lonely black boys / beneath the floorboards”, drawing on the tensions between creative expression, generational trauma and the commodifcation of Black pain by the art world for white, Western consumption, while at the same time positioning his work as intrinsically in dialogue with, and directed towards, the African diaspora. Transitioning to Britannia, Julian pulls his focus outwards to observe his own relationship with Britain’s colonial past and present, levelling with us: “the thing is, Britannia will kill you and smile while she’s doing it.” Central to the poem is the reminder: “You are a rock / helping you body / to come up and breath,” speaking both to those who are displaced, as well as to his own feelings of imposter syndrome in predominantly white spaces. “You carry this heavy thing and you have to remind yourself that you belong here too,” he says. Surging up from the basement, the poet’s words erupt into a space that was not built for him, but that he now claims as his own, fearlessly, “a sitting revolution.”

In Black Room, Julianknxx turns his attention to the history of Brutalist architecture, as well as its inextricable links with the history and experience of Black people living in Britain. Considering what he terms “hyper-organised living” in the city of London, the poet explores what it means to live and breathe in buildings such as Trellick Tower, Balfron Tower and Grenfell Tower, buildings he understands to symbolise a certain disconnect between Black bodies and the natural potency of the earth. “When you look at those spaces in terms of survival, what it means to live a healthy life, that connection to earth, it’s just not attainable,” he says.

“It’s a dead space, literally, like concrete is dead,” he continues. “It’s almost like, to survive, you have to look within, because we live in this dead thing, and that’s the cry, to look back home.” Working in collaboration with the artist Darryl Daley, Julianknxx translates his poem Black Room into an audiovisual investigation of strategies for living within this kind of constructed space, contrasting archival footage of sweaty dance floors, thronging masses and a congregation singing along to the classic spiritual ‘Wade In The Water’ with the lonely expanse of Baynard House in Blackfriars, London.

Dancer and choreographer Nafisah Baba matches the building’s imposing lines with taut, visceral movement, manifesting an almost immune response to the warmth and intimacy of Black communities being transplanted into hyper-organised, yet impersonal, concrete space. It is through the physical response captured in Black Room, in both words and movement, that Julianknxx identifies a continuum that connects the ingenious design of Brutalist architecture and the intricate hegemonic narratives that run through the history of England, narratives designed to obfuscate structural racism and our country’s colonial past.

Julianknxx Presents: We Are What’s Left Of Us

Julianknxx, THABO and Happy Cat Jay begin We Are What’s Left Of Us with the sound of breathing. “The air is different now, we need to think about how we breathe,” the poet reminds us as he reflects back on a year that redefined breathing for the whole world. “Now that the pandemic has happened we’re thinking about space, we’re thinking about our health, we’re thinking about our connection to nature, breathing healthy air,” he explains. Living in fear of the very air that we share with those around us has reframed our relationship with our breathing, dictating in part how we live our lives in what’s left in the wake of COVID-19. “We have to breathe differently,” he asserts, “so this is what’s left of us.”

It’s a sentiment that connects back to his poem In Praise Of Still Boys, where, upon glancing the Atlantic Ocean through the window of an aeroplane, he thinks back to the days of that ocean’s slave trade’s Middle Passage, wondering how it could possibly hold the millions of Black bodies that crossed over it at that time. The waters of the Atlantic became a space in flux for those slaves shipped to the New World from Africa and a more permanent resting place for those thrown overboard during these journeys. As Christina Sharpe puts it in In The Wake, “the atoms of those people who were thrown overboard are out there in the ocean even today.” It is during this contemplation that he is struck by the words: “You are what’s left of us. You are what’s left of us.” What is left of his culture, in both his birth place of Freetown, Sierra Leone and his current home in London, and who among his friends and family are left, breathing differently, are the fundamental themes Julianknxx speaks to with his poetry.

“You carry this memory in your body, it’s something that you carry,” he explains. “I walk into certain spaces and I have to double check myself sometimes. Where am I? How do I speak? How do I breathe in this space?” In order to answer these questions the poet considers the significance of his birth language, Krio, an English-based creole spoken mainly in Sierra Leone. Derived from the Yoruba phrase “a kiri yo”, which Julian translates as “aimless yet satisfied wanderers”, Krio itself serves as metaphor for the poet’s life, its nomadic roots casting an ironic light on the poet’s own uprooted origins and Freetown’s colonial past. As much life force as the poet can pull from his birth place through his connection to the foundational stories and language of his hybrid culture, his black light also necessarily must illuminate the wake from which he speaks. Whilst it is true that “to be Krio / is to be boundless”, an aimless yet satisfied wanderer, what is left to the poet on the other side of his journey across the Atlantic is a “mourning identity / a hard freedom”. It is through his interdisciplinary poetic method that Julianknxx is able to connect these dichotomies within his own history from below.