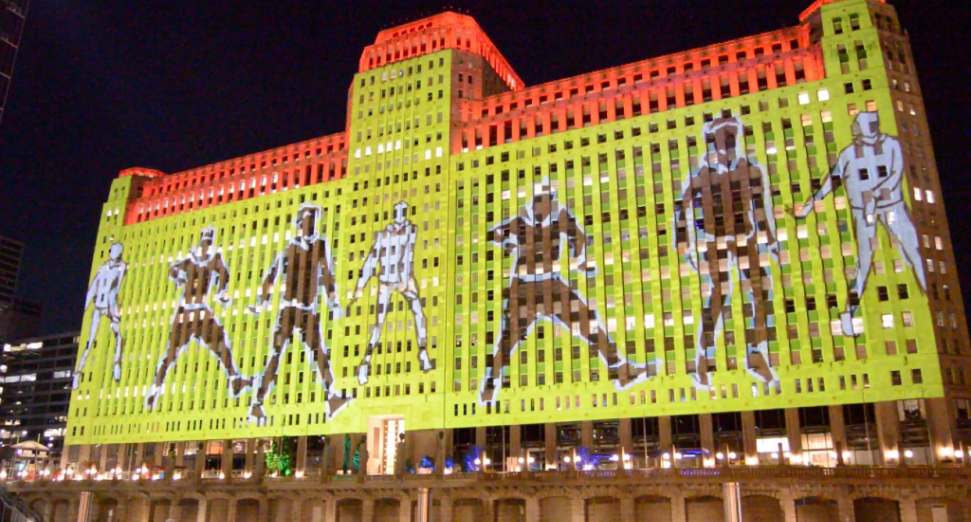 A short film on the music genre and dance style footwork is being projected onto Chicago’s Merchandise Mart, a huge Art Deco building home to shops, offices and showrooms, through to early September.

The projections are taking place as part of the city’s Year Of Chicago Music project, which sees the Department Of Cultural And Special Events link up with Art On TheMart, a public art initiative. Three films are being projected onto the building for the project, and the first of those is ‘Footnotes’, an animation on footwork.

The short film is being screened from 9pm to 9:30pm local time every evening from July 13th until September 16th.

‘Footnotes’ focuses on musicians and dancers based on the West and South sides of the city. Featured music comes from leading footwork artist DJ Spinn, as well as Angel Bat Dawid and the Chicago Bucket Boys. The music will play through speakers along the Chicago Riverwalk.

The film is the work of documentary filmmaker and scholar Wills Glasspiegel, who worked with footwork dancer and animator Brandon Calhoun on its creation.

Find out more about the whole project via The New York Times.

Read DJ Mag’s 2018 feature on how footwork made its way from Chicago to Madrid and infiltrated the Spanish underground here.