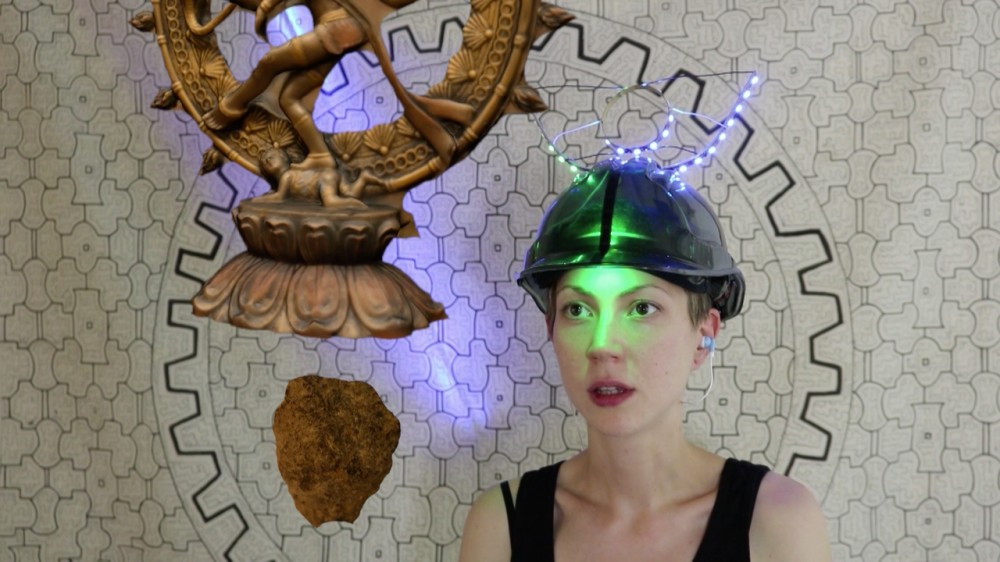 Another ritualistic transmission from The Wave Epoch.

During their 2018 residency at CERN, artists Haroon Mirza and Jack Jelfs began to speculate about the future. Granted access to the largest particle physics lab in the world, home of the Large Hadron Collider, Mirza and Jelfs envisioned an age where the ruins of the site of some of the most important scientific discoveries of contemporary times are discovered by future civilizations. Thus the world of The Wave Epoch was born, taking the form of a concept album, film and multimedia performance that imagines the kinds of rituals, practices and questions that would arise upon such a discovery.

Starting life as a multimedia installation, ‘one1one’ can be understood as one of these rituals, a garbled invocation of language data-sets, algorithmically generated text and frenzied machine poetry. Collaborator Jessica Barter reads words generated by an A.I. trained by Jelfs in a techno-shamanic ritual, leading an incantation that opens with the declaration: “we’re ordered to erase sounds”. Fragments of collapsed civilizations are jumbled together in Barter’s speech as kernels of meaning are uncovered and summarily discarded.

Jelfs’ open-source approach to the material of the work simulates the experience of picking through the junk of an old world in an attempt to piece together a coherent narrative. Blurring together image, text, speech and sound, the data ritual builds to a frenetic sensory blitz as multiple layers of disconnected information are superimposed upon each other in a semiotic meltdown, before collapsing into a dwindling binary, the signal flickering before it dies.

Musical interpretations of ‘one1one’ from Jelfs, Fracture and others will be released on OUTPUTS, an experimental publishing imprint operated by hrm199, the studio of Mirza and Gaia Fugazza, and musician, synthesist and artist Nik Void.

The Wave Epoch exists as a film and an album that is available digitally, as well as in the form of a limited edition physical version, which takes the form of a playable artwork made from machined card and foil by Haroon Mirza, housed in a 12″ record sleeve.

The Wave Epoch is out now, on OUTPUTS. For more information about the label, you can visit the Bandcamp and follow the label on Instagram.