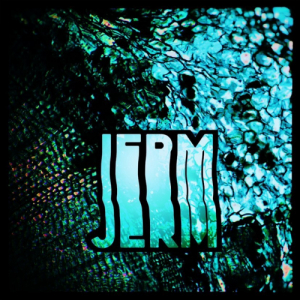 While the history of Jerm isn’t huge, it is still one to be discussed as I have a feeling that they will be getting more and more attention as time goes on. The Australian group draws from industrial, gothic, and electronic music in equal parts and has recorded and mixed music in their home studio. They work as a four-piece band and have created a live sound that has Brisbane’s local music scene raving, “Jerm showed up and simply plowed over everything like a giant rectangle.” Their debut single, ‘Make Your Mind’, released on August 27th, 2021 and came with an accompanying visualizer. The song showed promise, however, it was not to decide the fate of the project entirely. What does show Jerm’s absolutely incredible talent, however, is their self-titled debut album. A crafty combination of experimental pieces, industrial mechanics, and some elements of pop, Jerm’s debut is a worthwhile journey.

The song that starts the album ‘White Lie’ has this wicked, tribal-like bassline that pulses and thumps from beginning to end. Noise textures flirt with this rhythm often gleaming into glitchy territory; this static noise is never enough to be bothersome, but perfectly balances itself in the midst of the track. Like a dark and underground techno track only meant to be heard by a select few, the vocals are soft and almost whispered; again, they find themselves expertly placed within the mix and complement the music as much as the music compliments it. Towards the end of the track, there’s some trance influence in the brightened synths.

‘Make Your Mind’ begins with quiet noise and oscillating synths that eventually opens into further soft vocals around the thirty-second mark. Eventually, the sea breaks open from this industrial-Moses and I am led into a journey of what can only be described as experimental, avant-garde pop. It sounds like the soundtrack to an eye-opening journey, or at least a song that would play as if I were looking at one of Earth’s greatest mysteries. Beautiful, haunting, and yet so serene.

‘At Night’ draws in inspiration from IDM thanks to its delicately paced bass rhythm. Ambiance plays a huge role in the song as well, as slightly gritty synths back the track from beginning to end. Once again, Ganfield’s vocals are on full display as they echo and perform a solid, emotional performance throughout.

The sci-fi sounding electronics of ‘Left Behind’ brought me straight into rough industrial territories. Sharp computer pings, wobbly radio transmissions, and heavy drum pads brought me into a world of exotic machines. However, I will say that the vocals didn’t always quite fit the rhythm of the beat. Take, for example the section around the one-minute and ten-second mark where the rough industrial mechanics take prominence until around the one-minute and twenty-five second mark. It’s in this area that I felt as if the vocals were too soft and spoken-word to match the beat.

‘Gem’ is a brilliant piece that plays with soft experimental synths. Plenty of samples and textures run through the song, always giving it a quirky edge. There’s never a dull point in ‘Gem’, whether odd synths, high pitched crosses, or dirty and glitchy synths pulse through. The follow-up track, ‘Dissect’, reminds me of old 80s action movies as a band of steroid-abusing heroes travel through a jungle to assassinate their target. In fact, it sort of reminded me of the ending of Scarface, when Sosa’s men are beginning their stealthy assault on Tony Montana’s mansion. Well-done, even if that wasn’t the intent.

‘Brain Candy’ brings forth the gritty and deep synthesizers from earlier as a backdrop. This is all over a sullen soundtrack to a sad time. Once again, I cannot praise Ganfield’s vocals enough; she’s able to perfectly capture the mood of the song with her voice. It sounds like she’s able to do this with ease. Though the song is primarily instrumental, her valuable input is a welcome addition. Swooping synths and a sense of urgency is the name of the game on ‘Beg’. Once again crawling through the trudges of industrial and experimental pieces, there’s also a goth edge to the song thanks to some twangy-synthesizers that reminisce classic goth rock ensembles. It’s the final song on the album, and a great one at that.

I receive hundreds, if not, thousands of releases via e-mail for submission to Brutal Resonance for review or coverage, and I would say that around eighty percent of them are unable to catch my attention. This is due to the fact that I’ve heard a lot, and when I hear a lot, it’s hard to find music that’s so interesting, so unique that I cannot help but play it over and over again. This is how I feel about Jerm’s debut album; it’s a unique piece that covers so many underground genres and yet makes them their own. The band’s knack to create a delicately balanced mix fused with creative and wild electronic pieces paired with Ganfield’s sensational voice marks one of the best albums of the year. Nine out of ten!