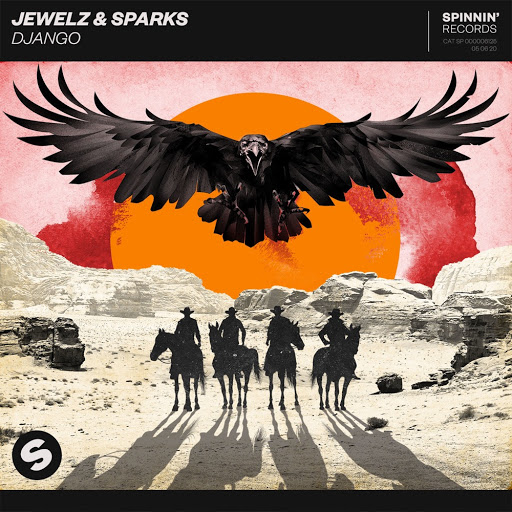 Endorsement performs wonder they say, and so it did. Browsing through the New Music Friday list, I couldn’t find something to review which withheld my interest. But there it was: one of my preferred pair, Jewelz & Sparks with their newest offering “Django”. The epithet further caught my eye since it is christened after the gritty and humorous film by Quentin Tarantino, whose mise- en-scène was inspired hugely from the “Old West” settings.

The trait which I admire about this talented German dyad is their often quirky but signature style of House music. Listeners are bound to be reminisce about the earlier decade of Dance music with their preferred sound, but also with a modern spin which makes it intriguing to hear. Initiating this year with “Up In the Air”, slightly infamous for its “shepard-tone” tonality, they further shared a joint-effort with the Dutch natives Sick Individuals for a follow-up on “Reaction”, unveiled as “Tonight” on Revealed Recs.

Alright, now into the mentioned instrumental. Obviously, one cannot disregard the western-tinged soundscape, especially the steely guitar riff along side striding drums march. This is cleverly disguised with the incoming riser, which then leads to the drop. Now, expect no more or less, there is the classic Groove-Electro House synths involved. The fast-pacing riff is complemented with harmonica filling in the gaps, an ingenious move to nail details in the ongoing theme.

The second breakdown doesn’t bring abrupt changes, letting the atmosphere set with the elements from the first one, but this time modernity grabs opportunity, presenting saw synths playing chords, and the kick plays in accordance. It doesn’t feel out-of-place, and glues attention towards the concluding round of drop!

So, in total, “Django” certainly sets the mood with its ambience, and doesn’t let the audience down entirely for what they might expect. But the blueprints of the instrumental isn’t bereft of the cut-and-dried staples of this genre, and a distinctive take would be perhaps more appreciable. Nevertheless, it is an amusing experience altogether!