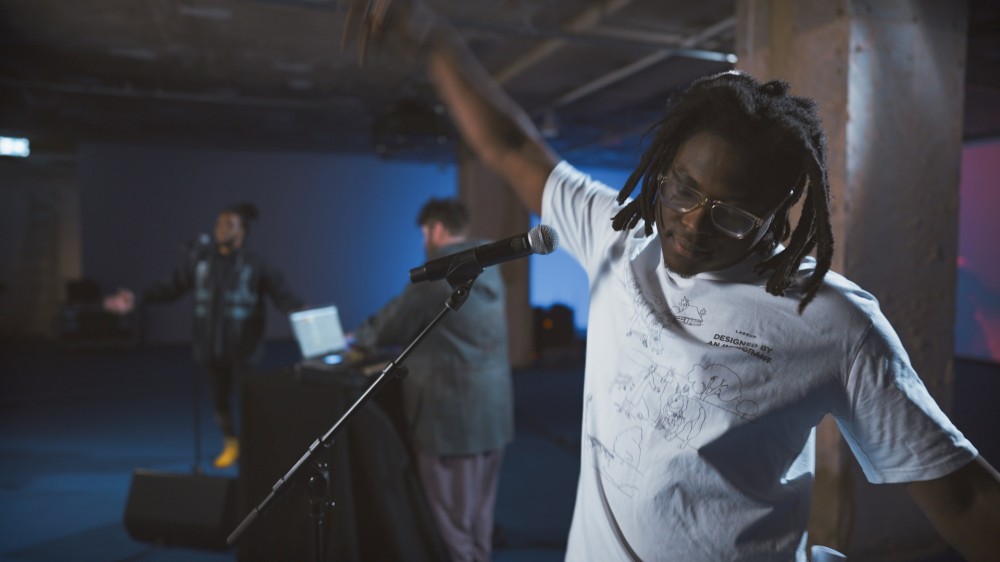 An urgent, vital transmission from the subterranean depths of 180 The Strand.

“If you call yourself a poet, that comes with a spiritual weight. You can’t just take it so lightly. You’re bringing in a whole timeline, a whole world with you. You’re speaking things into existence.” For Julianknxx, poetry encompasses a discursive and ambitious artistic practice, one that moves seamlessly between sound, image, film and performance. He understands his role as a poet as inherently exploratory. As well as a mode in which to move through the immediacy of the present, poetry offers him a channel with which to tap into the wellspring of the past, as well as a guide to write by when thinking about the future. “Trying to find language to name my experience and what that looks like led me to poetry,” he reflects.

Julianknxx does not understand his experience as a solitary concept, but as an expansive and ongoing conversation between the many voices, past and present, that make up the cultural patchwork of his life. Displaced from Freetown, Sierra Leone at the age of nine during the outbreak of the country’s long and bloody civil war, the poet moved with his family to the Gambia, before eventually relocating to London at the age of 15. This movement during his formative years put him contact with twin histories of conflict and colonialism, inciting in him the desire to write what he terms a “history from below.”

His work dismantles elitist historical, political and sociological narratives by moving towards a “new moral imagination”, something that is manifested in his stunning film In Praise Of Still Boys. The piece is a retelling of the poet’s own childhood in Sierra Leone through the lives and experiences of young boys living and growing next to the blue waters of the Atlantic ocean. “My goal is to inspire those who see my work to look more carefully at the world around them”, he explains, “to discover beauty through the lens of a black light.” It is this same black light, the light of the Black British experience, that imbues Basement, the first of a series of works Julianknxx has created as the artist-in-residence at 180 The Strand.

Enlisting the talents of producer Happy Cat Jay and the Zimbabwe-born, London-based soul musician THABO, in Basement, Julianknxx leads an urgent performance of two poems, Black Room and Britannia. Each is underpinned by a shuffling, melancholic instrumental that samples the vocals of Afrika Mamas, a seven-piece, Zulu folk acapella ensemble made up of single mothers living in Durban, South Africa. Elements of their track ‘Thula Sana’, a traditional Zulu lullaby, are woven into the performance, a cathartic balm to the poet’s words of crisis. Each poem featured in Basement represents a reification of an aspect of Black experiences in Britain, a struggle through an environment that is in so many different ways structured in opposition to the lives of immigrant families. His collaborative performance charts the process of drawing life force from his ancestral pool in times of need. “There’s a real neglect of foundational stories, foundational language,” he says of the piece, positioning these elements as sources of power for his performance.

In Black Room, the poet contrasts a “black room / black art / many black dialects” with those “lonely black boys / beneath the floorboards”, drawing on the tensions between creative expression, generational trauma and the commodifcation of Black pain by the art world for white, Western consumption, while at the same time positioning his work as intrinsically in dialogue with, and directed towards, the African diaspora. Transitioning to Britannia, Julian pulls his focus outwards to observe his own relationship with Britain’s colonial past and present, levelling with us: “the thing is, Britannia will kill you and smile while she’s doing it.” Central to the poem is the reminder: “You are a rock / helping you body / to come up and breath,” speaking both to those who are displaced, as well as to his own feelings of imposter syndrome in predominantly white spaces. “You carry this heavy thing and you have to remind yourself that you belong here too,” he says. Surging up from the basement, the poet’s words erupt into a space that was not built for him, but that he now claims as his own, fearlessly, “a sitting revolution.”

It is this sense of burden that Julianknxx seeks to open out more broadly during the course of his residency, exploring how notions of weight apply to life lived during a global pandemic. “What are we holding?” he asks, “The air is different now, we need to think about how we breathe.” Taking a line from In Praise Of Still Boys, “you are what’s left of us”, the poet wants to interrogate what remains in a world where breathing has been re-contextualised. In order to do this, Julianknxx calls upon his friends and family, from his collaborators on Basement to those voices, past and present, that make up his culture, in what he coyly terms “the poetics of bringing people together to make something happen.”

You can find both Happy Cat Jay and THABO on SoundCloud. For more information about Julianknxx and his work you can follow him on Instagram.

lonely black boys
beneath the floorboards

at risk of the black house
falling       pulling a black

song out the basement
footsteps dancing

to walk out the house
leaving them lonely

asking how much darker
does it need to get before

the lights come on.

The thing is, Britannia will kill you and smile while she’s doing it. She will wash her hands with our water, our diamonds and cry innocence. Their chimneys have stopped the smoke but this gaslighting city still tears you apart. Your memory an axe

it wrenches within a storm
a heart, be it blood & water
a floating question
your whole body
a sitting revolution