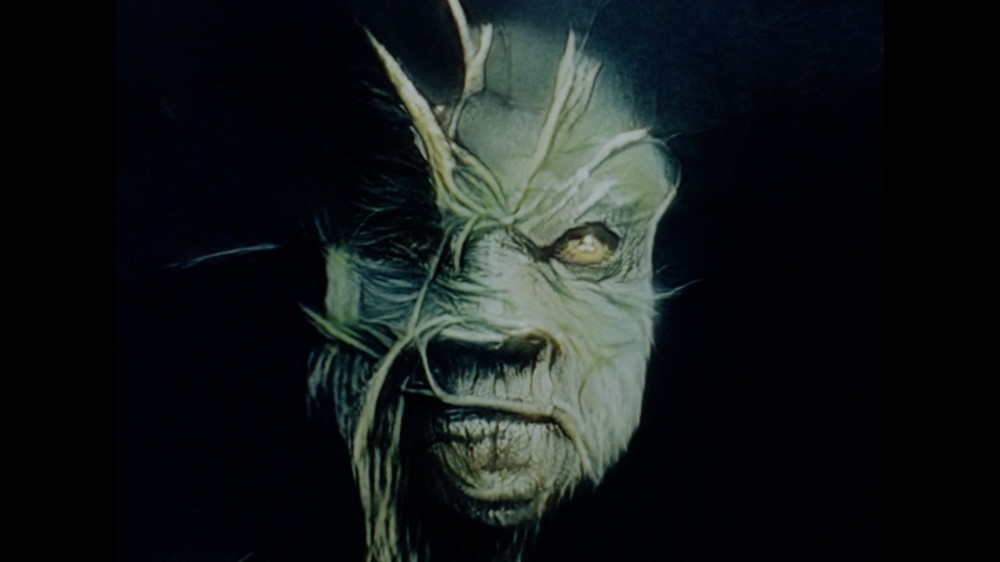 Enacting a queering of Swamp Thing as both science-fiction icon and adaptive model for exploring and challenging identity, artists Laila Majid and Louis Blue Newby look to the peripheries for slippery aesthetic and linguistic forms that defy categorisation.

In the latest work from artists Laila Majid and Louis Blue Newby, the swamp emerges as a particularly fertile space for exploring collaboration. south florida sky, a composite video work featuring hand-drawn animation from Alice Bloomfield, GAN animation made in collaboration with Elliot Elder and sound design from Jennifer Walton, was a central work in their most recent show, not yet, which took place at London’s San Mei Gallery earlier this year. Drawing influence from queer theorist José Esteban Muñoz’s essential book Cruising Utopia, in which he models queerness as an inherently future-facing, utopian mode, Majid and Newby find slimy potency in the swamp as a site of relational intensity and exchange, in which everything slithers in and through everything else. “The swamp can really question and challenge the essentialized and stable identity of the individual, which is valued and celebrated more than ever in 2022,” the artists assert. “The swamp as a facilitator of collaboration and the construction of polyphonic artistic voices feels more politically urgent than ever.” Existing, fittingly, in relation to and of the same matter as the curational group art project Most Dismal Swamp, the most recent iteration of which, MUSH, Majid contributed to, the swamp is rendered as both a space and entity, existing across different media, both virtual and devirtualized, into which context, form and discipline are submerged. Within this hybrid space Majid and Newby explore the peripheries of aesthetic and linguistic expression, probing the slippery limits of image, language and sound that is not yet, liminal forms bursting with transformative and transitional potential.

This potential is personified in Swamp Thing, around which south florida sky is situated. Taking the iconic DC comic hero’s legendary characterization by Alan Moore, an eco-superhero and centuries old sentient plant suffused with the consciousness, memories and emotions of a man, Majid and Newby code Swamp Thing as “a vessel for disidentification,” enacting “a queered process of recycling the encoded meaning of a cultural object, and making a new space for the queer or minoritarian subject, one usually peripheral to mainstream narratives.” To this end the entity is represented in counterpoint with itself, initially wrought in the intricate lines of Alice Bloomfield’s stunning animation, in which twists of tree branch and folds of damp rock are captured in sensual curves that threaten to engulf Swamp Thing’s hunched form. As burnt orange swamp flowers blossom from its’ veins, garbled voices sound in polyphony, the voice of Swamp Thing and the voices of the swamp projected as symbiotes of the same organism. This speech, inspired by the visceral subjectivity of New Narrative literature and adapted from found phrases by Majid and Newby, lends lyrical physicality and sensuousness to Bloomfield’s representation of the character, her illustration itself a reworking of a panel from the Swamp Thing comics, an artistic corruption in which the still image is injected with renewed expression, made animate in the primordial ooze of the swamp. From the painstaking lines of Bloomfield’s animation we are confronted with the synthetic blur of Elliot Elder’s GAN animation, the result of a neural network glutted with hundreds of images of various versions of Swamp Thing across different media, as well as swamps, slime molds and mycelium.

“One of the major challenges was really trying to push the work away from resting solely on the aesthetics of the GAN which have been used so thoroughly in contemporary practices,” Majid and Newby explain. For both sections of the video work, the original digital image is further mediated by being re-recorded on 16mm film, a gesture towards analogue tradition and digital technology that is in direct conversation with José Esteban Muñoz’s formulation of the queer, utopian mode as “a conjuring of both future and past to critique presentness,” as he asserts, “utopian performativity is often fuelled by the past. The past, or at least narratives of the past, enable utopian imaginings of another time and place that is not yet here but nonetheless functions as a doing for futurity.” This entangled relation between the analogue and the digital is played out in the work’s sound, with Jennifer Walton employing computational techniques alongside live instrumentation, layering cello recordings from Shovel Dance Collective’s Dan Evans into the eerie textures of her score. “We wanted to find a way for the sound to reflect the atmosphere of both the swamp and the GAN sequences,” explains Majid and Newby. “The sound slips in and out of abstraction- moving between the more musical sound of the cello, electronic noise, and digitally processed vocal samples taken from the accompanying script. It was also important for us that the texture of the video sequences be reflected in the sound– for example, the grain of 16mm footage or the slipperiness of the digitally produced GAN footage translated into specific sonic textures.” Translating the hum and buzz of the swamp into dissonant noise and claustrophobic throb, Walton’s composition builds to a climactic sequence of orchestral mutations, heralding the arrival of a character in a constant state of reforming and remaking.

Majid and Newby started collaborating back in 2018, when they both graduated from Chelsea College of Art. “Initially starting as an online exchange of images which we’d send to one another, this discursive process soon developed, whereby we were able to pool these common interests into making artwork together,” they recall. Since then they have worked on the collaborative shows hold my hand by the tail (2019) at Transition Two and healthy pink (2020) at springseason and their work has been featured in the group shows Sour Persimmons Chasm (2019) at Ex Baldessarre, curated by Andy Holden, and Hydrangea (2019) at Underground Flower, Nakhon Ratchasima. “At its core our practice stems from this act of collecting and storing images,” they explain. “We have a shared image archive that we are constantly updating, one that consists of scanned archival imagery, video and film stills, pornorgaphy, google image search results and memes. Each of these image types come with its own unique weight and texture, and consequently speak to varying ways in which visual culture can be transferred and consumed. The bringing together of a high-quality scanned halftone-printed image with lower quality image mined from Reddit, for instance, opens up a new visual language, one based on mediation itself.”

The memetic valence of their work, borne out in Majid’s role as one of the admins of the beloved and deranged meme account doyoueverjustfuckingascend, imbues the same density of expression observed in south florida sky in the print-based works of not yet. The artists obscure found images with layers of muted contrast and lysergic noise, as though dipped in the rich acidity of the swamp to which they constantly return. The result is a humid complexity that recontextualizes mediation into the condition of the swamp and the swamp-like, a mode of hybridity and interconnectedness that resonates with Muñoz’s transtemporal model for queerness as utopian performativity. It is also the condition of Swamp Thing, as well as the mode in which it is and does, captured poetically in the words of Alan Moore, in Swamp Thing Vol 2 #34, published in 1985 and included as an epigraph for not yet by the artists: “Through him, I sprawl with the swamp, sopping, steaming, dragonflies stitching neon threads through the damp air surrounding me… Beyond him, I wrestle the planet, sunk in loam to my elbows as it arches beneath me, tumbling endlessly through endless ink.”