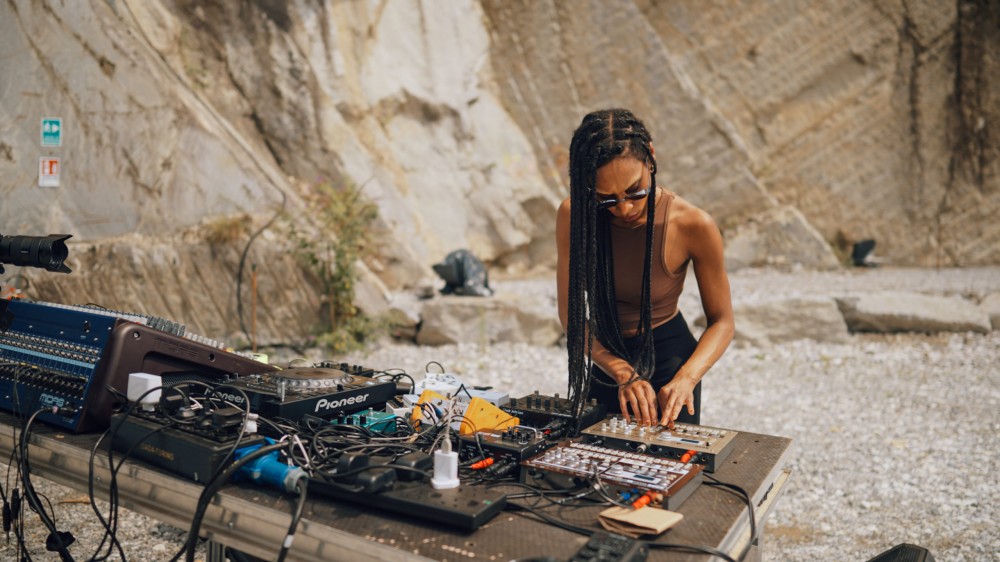 Across releases for NON Worldwide, UIQ and her own INITIATION label, Nkisi has crafted a unique style of club music that draws its influences from both her Congolese heritage and gabber and hardcore, which she was immersed in as she grew up in the Belgian town of Leuven. Nkisi’s visceral live performances push her hardware setup to the limit to create high-energy sets that blur the lines between polyrhythmic techno and experimental composition.

In July 2021, Fact travelled to Italy’s Nextones Festival, where Nkisi was performing alongside Caterina Barbieri as part of her new light-years platform. While we were at the festival, Nkisi performed an exclusive Patch Notes performance for Fact, set amongst the rocks of the Roncino quarry in the Ossola Valley that is home to Nextones.

Nkisi’s setup was one of the most unique we’ve seen on Patch Notes, with a strange electronic wind instrument providing eerie textures. “[I performed with] a couple of drum machines and FX pedals (this time I took my Korg Tribes out), a CDJ connected through a Tera Echo FX pedal, my Siren noise machine, and my favourite gear of the moment, the SOMA pipe, Nkisi says. I got into their gear through a friend showing me Ether, their electromagnetic recorder.”

As Nkisi explains, the performance was improvised. “I like to give myself some parameters and go from there – connect with the elements, tune into the micro black holes, invoke the spirits and ancestors… I guess they decide.”

“I like to go for how I feel at the time of the performance, my setup is mostly an expression of my musical state.”

The performance was also influenced by the unique setting, which complemented Nkisi’s own practice. “In some research I did on cymatics in nature and architecture I came across how granite stone is a very good electrical conductor and was used to amplify sound, mostly in churches and temples. Also there was a lot of water around – as my work is mainly about expanding electromagnetic fields through rhythm and connecting to the heart, earth and cosmic torus energy field through melody, being surrounded by this powerful force made the job easier!”

As well as accompanying Barbieri on a series of light-years shows this year, Nkisi is also focusing on releasing music through her own label, Initiation, which launched at the end of 2020. “Initiation came about as an answer to all the ancient sound technology I have been studying,” she says. “Its main focus as a label will be to give a platform to musical voices and sonic practices that focus on trance as embodied forms of knowledge production and knowledge exchange – in other words, music that unlocks the secret knowledge stored in our bodies.”

“Music and vibrational sounds in particular connect us to the energetic morphic grid that we share with all beings, animated and inanimated. I am interested in exploring other ways to do and use music – how can we collectively change and influence this energetic grid? I am researching for my next album and smaller releases connected to some upcoming theatre performances… more soon.”

Special thanks to Iggor Cavalera, Niccolò Tramontana and Nextones Festival for production.