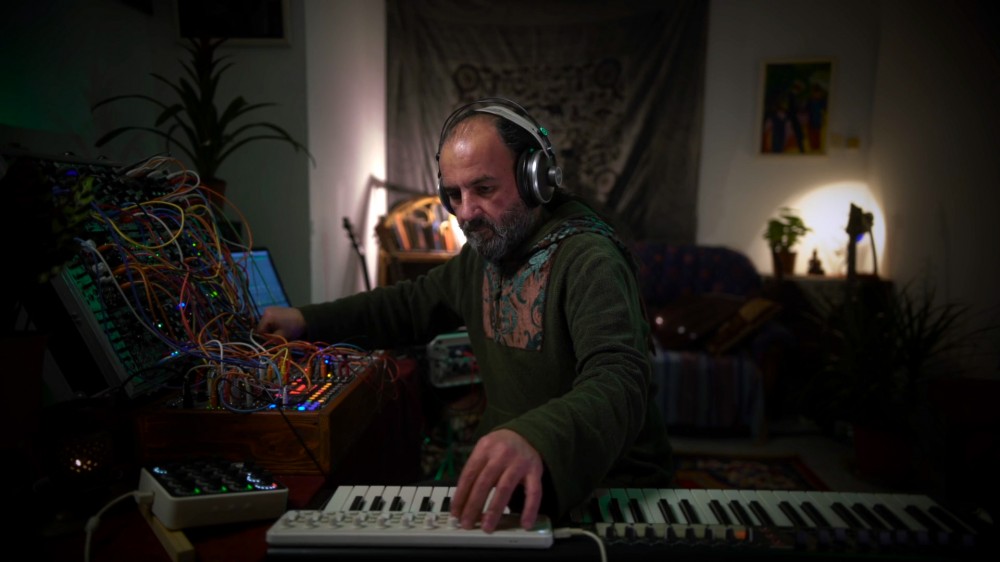 A generative modular performance from the Palestinian experimental musician.

Raymond Haddad is a Palestinian composer and self-taught bass player with a background in jazz, classical and the Arabic music tradtion. In 2018, Haddad reached a turning point in his career when he built his first modular system, and began to integrate schools of East and West Coast synthesis into his expansive musical practice.

“Sometimes the modular runs for two days with sweet analog sounds, generative melodies and rhythms, and I’m just staring at the walls of the studio fascinated by the sounds and music asking myself how to put this into a track,” Haddad says of his practice. “Getting to electronic music from a long heritage of jazz and classical, western and Arabic music productions for over 25 years is a breakthrough, yet it feels so right when your soul feels it’s a child again.”

In this episodes of Patch Notes, Haddad creates a generative composition titled Dissolve, which combines his modular synthesiser with rhythm from Elekton’s Octatrack and pad sounds from Ableton Live.

“In this patch I mixed between a composed chord progression on the sequencer with a probability and generative solo from the modular. Starting with out of rhythm atmospheric sounds, freezing the solo with Mutable Instruments Clouds and the chords were played from Mutable Instruments Tides in VCO mode, all clocked by Mutable Instruments Marbles moving from chaotic clock into rhythm,” Haddad explains.

“I interacted with the modular by playing a pad sound from Ableton which was the tune that started the composition. I also used the Octatrack to play a glitchy rhythm along the other generative sounds from the modular. All the session was recorded live to Ableton which acts as my mixer and FX sends.”

“This session was recorded in my living room where I moved some of my equipment due the pandemic. The whole situation was weird and kind of nonsense for me, not enough being a Palestinian performer and artist who struggles on daily basis to sustain his life in a place where the experimental electronic music scene has not been born yet, but the whole world was closed loosing some of the stages and festivals in Europe I was booked to play.”

Haddad is currently working on his debut album, which is expected to be released by the end of summer 2021. He also posts performance videos regularly to his Instagram and YouTube channels, and you can buy his music at Bandcamp.

Filmed and edited by: Ashraf Dowani