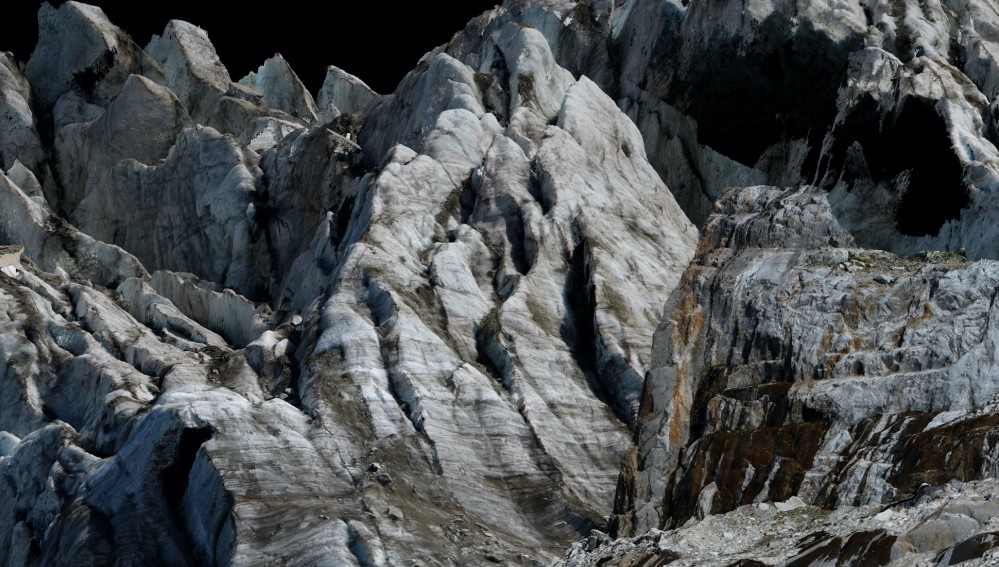 Continuous Topography is reimagined as a visual partner to the ice-cold soundworld of one of patten’s latest tracks.

For the second video to come from patten’s new album Aegis – his fourth LP to be released in the space of a year – the South London-based artist asked British artist and photographer Dan Holdsworth to reimagine his project Continuous Topography, resulting in a visual accompaniment that matches the icy soundworld of the spectral, shifting, genre-agnostic album track, ‘Cerulean’.

Holdsworth has been exploring the “extreme” territories that characterise humans’ changing relationship to the ‘natural’ world in the Anthropocene era since 1996, and since 2012 has worked alongside academic geologists to map the exact contours of Alpine glaciers and rock formations with drones, GPS, photography, and high-end software typically employed by military and climate scientists.

Continuous Topography is a series that has come out of this work, consisting of images created from millions of points marked in space, each a millimetre-perfect registration of the precise contours of a rapidly changing landscape. The incredible quantity of detail allows Holdsworth to transform raw ‘data’ into what he calls “a new type of poetry”, with each pixel having the colour of the ‘real’ snow, ice or stone in the landscape, making these works a new, strange type of image.

Aegis, which follows last year’s FLEX and this year’s beatless albums GLOW and GLO))), is available now via patten’s own 555-5555 imprint. The video for ‘Cerulean’ follows the self-directed visual for Aegis track ‘Torque’. Find more of patten’s music at Bandcamp.

Earlier this year, patten let us in on his process and walked us through his 15-year career as a musician and visual artist in an episode of our Artist DIY series.