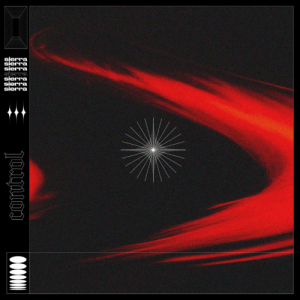 I’ve been waiting for an appropriate time to bring up SIERRA on Brutal Resonance for quite some time. I wanted to get the industrial techno producer’s last collaboration with Matteo Tura featured on the site. Alas, November was a busy time for me and I couldn’t cover it as much as I wanted to…Much like a ton of other music that released throughout 2021. But 2022 is a new and fresh year full of possibility. And I’m making it a necessary goal to flaunt and talk about my favorite artists as much as possible. Seeing how ‘CONTROL’ has launched right at the start of the New Year, I figured it’s only fitting that I tell you all how much I love it.
First, an introduction. SIERRA is a French producer inspired by industrial, techno, darkwave, sci-fi soundtracks, and synthwave. Her debut release “Strange Valley” took off like a wildfire with the physical CD version being long sold out. Since then, she has maintained a strong and phenomenal fanbase who is ready to buy up her merch as seen in her follow-up to “Strange Valley”, the now sold-out full-length album “Gone”. Paired up with the wonderful label Lazerdiscs Records, both the CD and the cassette version of the album swiftly sold out during its 2019 launch. Since then, SIERRA has made it primarily as an independent artist, releasing singles such as ‘Trapped’ and ‘By The Rules’ and EPs such as “All about love” and “Inner Speech”.
SIERRA’s musical journey continues with her brand new single ‘CONTROL’. The four-and-a-half-minute banger teases her upcoming EP which is due out this month. But it’s never too early to celebrate, is it? Anyway, ‘CONTROL’ is a hypnotic and mesmerizing dancefloor number complete with deep, robotic like vocals that repeats the lines, “Ain’t about money / Ain’t about Fear / Ain’t about Control / Ain’t about pain”. The final word in that trilogy varies throughout the stanzas but, unlike what you might think, it never gets annoying or played out. The voice sits perfectly in the mix and never tries to dominate SIERRA’s wondrous musical talent. SIERRA’s brilliance in ‘CONTROL’ lies within the subtle background ambiance; so silent yet it gives the track such a stark atmosphere. The beats are rooted firmly within industrial techno roots, yet at the same time has a near-future vibe that never lets up. SIERRA excels at constantly keeping the song moving with new electronic samples working their way into the song. This is not a by-the-numbers beat, but a moving synthetic creation.
If this is but one song off of SIERRA’s upcoming EP, then I can only imagine what the rest of it will sound like. Until then, I give this a well-deserved nine out of ten.