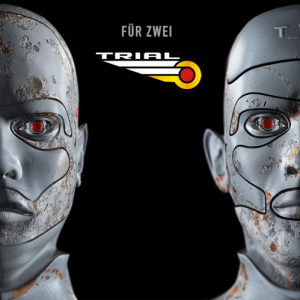 Trial goes back to the very early 90’s with their classic electro industrial/EBM albums. The debut titled Zero Feeling  left a life long impression on me. I remember walking into this record store back in 1994 not knowing what to expect being that I just moved to the area. The owner Bob, greeted me and we chatted a bit about music. At some point in the conversation the band Trial came up and Bob played their biggest hit for me “Blut und Eisen”. I was familiar with them by name. When the music played I was instantly captivated by Erick’s electronic mastery and execution of the ghostly synth play paired with Torsten’s guttural yet haunting vocals. To me it was as close to a perfect track as you can get. It was right up there with The Klinik’s “Black Leather”, Placebo Effect’s “Move (Animation Mix)” and yelworC’s “Sacred City (Short Mix)”. After nearly 30 years I still play these tracks. I remember hearing “Blut und Eisen” at the clubs in NYC and NJ. Many of the DJs shopped and even some worked at Bob’s legendary Cafe Soundz in Montclair New Jersey. Bob schooled many of us with his vast knowledge. I am always grateful for every interaction we had over the years, especially the early days when he introduced me to the legendary Trial and their iconic  masterpiece “Blut und Eisen” off one hell of a debut album Zero Feeling. The impression it left on me has never waned and I associate it with one of the most iconic record shops ever.

Trial released Zero Feeling in 1992 (Hypnobeat). Zero Feeling is easily a top album of the early 90’s and even beyond. Sure “Blut Und Eisen” is the most well-known tune but every track channels a special piece of darkness that grips you tight and leaves you with a sense of awe and wonder. This approach gives Zero Feeling its undeniably unique sound. Its packed with the compelling amazing arrangements that have become the recognizable signatures that made Trial so damn impressive.

Secret Pain was a solid follow up to Zero Feeling. The sound was similar in some ways and different in others, perhaps incorporating more of the band’s current influences. “Control” with its sampling assault (remember this point as I will address it later) opened the album with the highest level of optimism that Secret Pain was going to be another chapter in the greatness of Trial. By the time the album played through one time it was evident Trial had harnessed the it factor  with the crushing force that drives “Sin”, “Hunter” and “Quid Pro Quo” along with every track on Secret Pain to the point of musical worship and fan gushing. However, at the same time it was the shift in sound that left me curious. It still sounded like Trial but the sound was refined and the delivery was tweaked just enough to be very noticeable, yet not too much that it lost the elements that made Trial so enchanting.  Trial did alter their sound in ways that we will explore in the next paragraphs, but in my opinion up to this point they did not alienate any of their current fans with the updated approach. It’s perfect blend of what captured me originally and what kept me going even since with Trail’s music.

I asked Erick what changed between Zero Feeling and Secret Pain? Like many musicians out there, Erick was looking to expand and explore new sounds. Zero Feeling was made using an Ensoniq EPS 16+ , an innovative sampler that was quite popular during Trial’s 1990’s run. With all of the editing abilities the EPS 16+, it allowed the artists to sample, splice, phase, merge, auto loop etc. The synthesizer filters allowed a switchable hi, low and band pass. Also, the accessibility of the board effects like reverb, delay, flange, chorus etc. allows the artists to really have some fun with the live sound which you can check out on the DVD. Also used was the basic ESQ1 and an Oberheim Matrix 6 as well as an Akai XR10 drum machine. Many of the additional sounds were incorporated through Trial’s production with Mathias Rewig. Erick’s sampling skills were significantly enhanced going forward from Zero Feeling. Now armed with the knowledge of the Korg M1and carried over the samples and other sounds to a Sony DAT and sampled from there into the EPS 16+. Resampling helped shape the final sounds you hear on Zero Feeling. One of the biggest differences between Zero Feeling and Secret Pain was the incorporation of a more organic foundation. The sounds were self-made rather than sampled.

Many years burned away by the time Trial would evolve even further with the release of their 3rd and final album No Fate. The No Fate era would be defined by the use of Cubase and hard-disk recording which paved the way for more possibilities with a robust and powerful sound. It was a mix new tracks and and reworked old tracks. Disc one is closer to the Trial of yesteryear with many reworked older tracks, while Disc 2 reveals more of the later approach Trial had, dare I say experimental. Most of what defined Trial on the first two albums evolved from the original foundation into new realms of experience, but that doesn’t mean what you hear on No Fate is not good, it’s simply a different approach with a different sound.

Electro Aggression Records have compiled a behemoth 4 part document of the band Trial. It spans across the decades following the birth and end of one of the most underrated electro industrial bands to ever exist. The release has 3 CDs and 1 DVD making it quite the task to break this down. The release is limited to 500 copies and aside from all of the audio and video there is a very cool booklet enclosed with many photographs of the artists and a foreword in German that appears to breakdown the history of Trial. There is no digital download for this. You will need an actual CD player and DVD player to experience the final chapter of Trial. The first CD captures the best of Trial from 2008 to the present day. The tracks include: “Brothers In Arms” from the first behemoth bestial box Old School Electrology released a little over 10 years ago by none other than Electro Aggression Records, “Fur Zwei” from No Fate and several other new and reworked classic Trial songs like the chilling and timeless “Blut Und Eisen”. The live CD has many of your favorite Trial staples  as well as a few newer tracks sprinkled in. The quality is quite good. I’m not the biggest fan of live albums as stand alone releases, however this disc makes sense as the release’s purpose stated by the label was to “cement” Trial’s legacy and what better way to do it than capture the duo in all of the studio and live glory. As Erick Miotke and Electro Aggression Records collaborated to generate this fine end result, not only do you get the exclusive CD previously mentioned, you get a live experience, a classic anthology containing most of the work from the the first two albums and the cherry on top, a visual of several live performances. If you are not fortunate to own Zero Feeling and Secret Pain, this is a slam dunk no brainer of a purchase because as I mentioned you get most of tunes from those albums on the Classic Anthology disc. See why the Electro/EBM world fell in love with Erick and Torsten as they set the early/mid 90’s on fire with two of the most underrated, dark, majestic, perfectly executed albums of all time. Just to fact check a little I asked a few friends about their memories of Trial. One remembers the DJs playing “Blut Und Eisen” and several people coming up those DJs and asking what band did they just play? Another friend and music producer remembered Erick as a super nice guy with a lot talent and understanding of music production. The final disc is the the DVD. Unless you lived in Germany or were lucky enough to travel, many Trial fans never got the chance to see what the live experience was like. The DVD takes us to a handful of shows that tell the story of the Trial live experience. The DVD quality is very good, and shot from multiple camera angles. The multiple camera angles allow for an all encompassing experience from the various vantage points to enjoy everything going on. In addition to the multiple camera feeds, there are some nice close ups of Torsten and Erick. Torsten is known for his intensity and you can really see the passion for his craft as he moves. Some of the close ups focus on his eyes. Even before I saw the close up shots I could see the fire raging within his eyes. He is 100% into the moment. Torsten moves to the beat and pulls the crowd in with his presence and devastating vocal attack. During the track “Diabolic” Torsten’s seems to serenade the fans in the front row. The seranade is gripping and haunting. I can see the excitement, wonder and even a little fear in the eyes of the fans. Meanwhile Erick channels every ounce of experience he has acquired over the decades and dishes out the sounds that will make even the darkness shiver at bit and leave an everlasting impression to cherish for years to come. Both Torsten and Erick take their best qualities and merge them together to demonstrate how  two guys can create something special with the main ingredient being an overdose of passion that will impact others. One of the highlights of the DVD was wondering why a drum set was on stage. It took about 15 minutes to get my answer. Erick was in his usual spot delivering the music that Torsten added vocals too. As the track ended Torsten attached his mic to the mic stand and walked behind the drum kit and absolutely blew us away with his live drumming. I would have expected Erick to do that, but seeing Torsten tear it up behind the kit was a cool sight for sure.

During the DVD, there are some shots that capture the next chapter in Trial. Erick has teamed up with Jens Muller to form Trilogy. You can see shots of Jens at the Trial gigs. Trilogy are ready to make their Debut on Electro Aggression Records next year. After a several self-released CDs, Trilogy will be unleashed upon the world via Electro Aggression Records. Trilogy has been known to bang out some classic Trial songs during their live sets.

In addition to Trilogy, Erick also has another project called Villaborghese which blurs the boundaries of experimental electro industrial and other forms of musical expression. It’s not Trial or Trilogy, yet I feel it has many qualities that could intrigue fans from many different genres.

The artwork is another aspect of this release. Pictured above you see the sci-fi vehicle inspired by trial’s logo. There is an interesting video that goes into detail how and why it was created. Check it out here. https://www.youtube.com/watch?v=Zr5YfG9omgA and below you see the “Brothers In Arms” video feature the artistic creations.

Now that you have all of the necessary information, what will you do? Wait for some jerk off to put it on a torrent site so you can hear it there or perhaps the inevitable Youtuber that posts it? The work put into this can not truly be experienced digitally which is probably why its not available in that format. Spend a few extra euros, dollars etc and get yourself a piece of history.