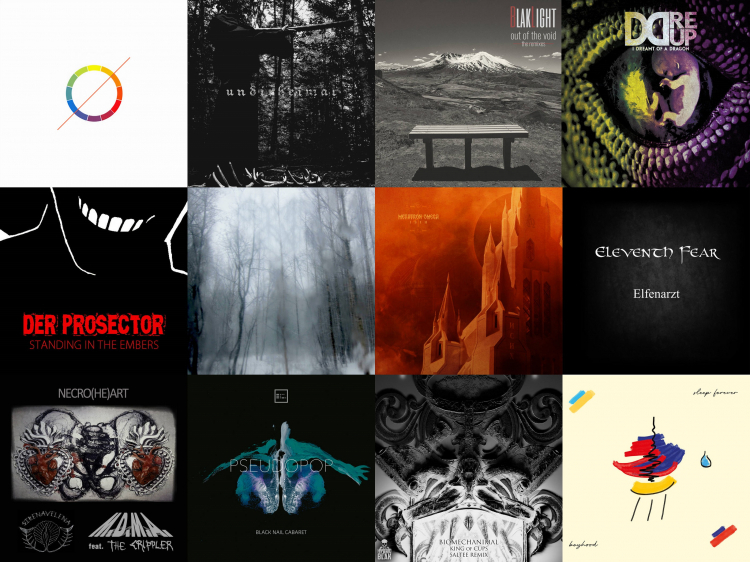 BlakLight : Out Of The Void (The Remixes)
Synthpop duo BlakLight has released a brand-new double remix and companion album to “Into The Void”. You will find two remixes of every song crafted by international artists including the likes of Aesthetic Perfection, Solar Fake, Brutalist Architecture In The Sun, klack, and more. The remix album has been released in both digital and limited edition CD formats. The Bandcamp version of the album will also contain six digital bonus mixes and instrumentals not found anywhere else. You can stream / purchase it below.

Der Prosector : Standing In The Embers
Industrial / punk outfit Der Prosector has released a brand-new EP titled “Standing In The Embers”. The EP is based around the lead single and title track, with remixes from The UCNX and Gordon Young attached. The political single talks of events from 2020 and 2021, including the Trump presidency, division within the States, and more. The lyrics, “The problem is some people want to watch the world burn” should give you a solid idea of what the track is intended to say. You can stream / purchase the single directly below.

Metatron Omega : ISIH
Metatron Omega has released their fifth album “ISIH” via record label Cryo Chamber. The seven-track release focuses on cathedral ambiance, dark choirs, and generally ominous atmospheres. As always with releases on Cryo Chamber, Metatron Omega’s “ISIH” is a concept album with a brief glimpse of the story available at the label’s Bandcamp page. You can stream / purchase the album directly below in both digital and CD formats.

M.D.M.A. feat. The Crippler & Sirena Velena : NECRO(HE)ART
M..D.M.A., The Crippler, and Sirena Velena have all worked together to release a three-track EP titled “NECRO(HE)ART” on Solium Records. One of the founders of M.D.M.A., Alberto, was gone from the music scene for twenty years, but decided to get back to work recently. He decided to dive into minimal, ambient, and drone frequencies rather than the hardcore / grind genres he was known for. Sirena Velena brings a vocal component to the EP, and puts the story into words. You can stream / purchase the EP below.

Biomechanimal : King of Cups (Saltee Remix)
Industrial bass monsters Biomechanimal have gotten their single ‘King of Cups’ remixed by drum’n’bass / metal artist Saltee. Biomechanimal said about the remix, “If the original King of Cups was too slow and heavy for you, DnB metal all-star Saltee has you covered, delivering a high octane remix of last winter’s single.” You can stream / purchase the remix below.

UNDIRHEIMAR : Vardlokkur
Undirheimar has announced that their brand-new EP “Vardlokkur” has been released via Cyclic Law. The three-track release runs for over a half-hour and marks a return to sound that was found on their 2020 album “Heljarrunar”. The EP is inspired by Thursian shamanism and minimalism. The EP is available in both digital and limited edition CD formats. You can stream / purchase it directly below.

Palavas : Half (Extended Edition)
Synthpop project Palavas has released their brand-new album “Half”. The album features nine original tracks plus twelve remixes, for a total of twenty-one songs. The concept for the album is the idea of only being half of yourself, questioning whether or not the empty space can be filled by music. “Half” is also the third part in a planned series of four LPs. Each LP explores states of grief that began with “Played” and was followed-up by “Centerpiece”. You can stream / purchase the album below.

thewalkingicon : Bite You
Russian artists thewalkingicon, known more for their mellow side, have teamed up with bass artist Kuzi Wahn on the single ‘Bite You’. The single is quite different from what you would normally expect from the duo. That being said, it is available for streaming and free download / pay what you want on Bandcamp. So check it out.

Nature of Wires : Building Reflections
The normally upbeat and generally synthpop output of Nature of Wires takes a turn on his latest album “Building Reflections”. This short dark ambient project was written within the span of a few hours on a dreary Saturday afternoon in November of 2021. Once it was finished, NoW invited supreme vocalist Madil Hardis to contribute on a couple of tracks. Gary Watts, founder of NoW, took a picture from the thirteenth floor of a hotel in Cardiff for the album artwork. After posting it to Twitter, a user tweeted back with what would eventually become the album’s title. You can stream / purchase it directly below.

Eleventh Fear : Elfenarzt
Dark electro project Eleventh Fear has released their brand-new single titled ‘Elfenarzt’ in digital formats on Bandcamp. Founder Ludovic Dhenry was busy writing and producing for his other projects Exponentia, Résonance magnétique and Zauber until recently. Now, he’s focusing his attention on Eleventh Fear in full. You can stream / purchase the EP directly below.

Sleep Forever : Boyhood
Markus of Veil of Light has announced that his solo project, Sleep Forever, will be releasing his first full length album on May 6th, 2022 via DKA Records. The ten-track aims to appeal to new wave fanatics, citing 90s New Romantic sounds and 90s dance / house music as influences. Sleep Forever utilizes analog and digital equipment both new and old to imitate a timeless mood. The album will be released in both digital and limited edition CD and cassette formats. You can stream / purchase the album HERE and you can stream the video for ‘Just For A Day’ below.

Black Nail Cabaret : Orchid
Black Nail Cabaret has released a brand-new music video for their single ‘Orchid’. The song was originally on their album “Pseudopop”, which has been completely remastered and is due to be released on April 29th, 2022 in both digital and CD formats with vinyl due later in the year. The band has partnered with Dependent Records who will be re-releasing BNC’s back catalogue. You can stream the video for ‘Orchid’ directly below and you can order the album HERE.

Fun Never Starts : WHO CARES
Industrial / dark electro artist Fun Never Starts have released a brand-new music video ‘WHO CARES’. The song is about how people just don’t care about one another anymore, let the world burn, and generally let things deteriorate. The music video has been edited and produced by Daniel Ouellette and takes on climate change, natural and unnatural disasters, and the pandemic. You can stream the music video directly below.

dreDDup : We Sperm Noise
Serbian industrial group dreDDup has released a brand-new music video for their single ‘We Sperm Noise’. The single comes off of their 2014 album “I Dreamt of a Dragon”. However, dreDDup is currently celebrating their 25th anniversary. As such, they’ve decided to create ten music videos for ten different songs from ten different albums. This is the second video they have done for the celebration so far. You can purchase the album from Bandcamp and you can stream the video below.

Pauline Andres : Speed Racer
Retro synthpop producer Pauline Andres has released her brand-new single ‘Speed Racer’. The single was recorded exclusively at nighttime in Nashville, TN in the USA as suggested by the video. Andres said about the song, “I didn’t make this song for any algorithm or radio. I made it for grown ups driving at night and needing the perfect soundtrack for their ride. I think that turned out pretty good.” You can stream the single directly below.

Magic Wands : Fortune
LA-based dream pop / post-punk trio have released their brand-new single ‘Fortune’. The single reflects back on the innocence of childhood, and how things weren’t so complicated back then. Looking back, it’s almost a blur. Vocalist / guitarist Dexy Valentine said that the song “is about fantasy and alchemy, simultaneously reflecting childhood and forgotten dreams.” The single is part of a series that will be compiled as an album later this year via Feline Records. You can stream the single directly below.

Fuj Kluk : NA PRÁŠKY
Dark electronic artist FuJ Kluk has released a brand-new single / music video titled ‘NA PRÁŠKY.’ The artist uses lo-fi electro and a ukulele with tuned percussions to reflect a really bad day. Fuj Kluk states that the video is “painfully actual” with lyrics written at the end of 2021, and the video being made in the beginning of 2022. You can stream the video below.

Lights A.M : Run Away
Norwegian electronic act Lights A.M has released a brand new double titled “Run Away”. The double contains two songs, both the title track and ‘Clouds’. The first song is a slow electronic ballad with ambient sounds, while the second takes us into the more familiar electropop territory of Lights A.M. The double is accompanied by a music video which has been made by founder Erlend Eilertsen’s long time partner Christian Paulsen. You can grab the double HERE and you can stream the video below.