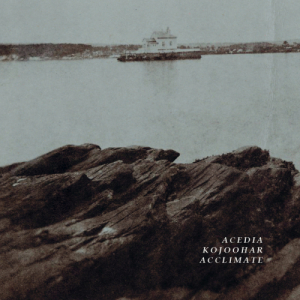 This three way split from angst pop producer Acedia, industrial project Kojoohar, and atmospheric noise and ambient artist Acclimate all comes down to a single and simple word: darkness. The trio have explained it eloquently, citing from their Bandcamp page, “Darkness is our constant companion from mother’s womb to our final resting place, so ignoring it means betraying our nature. Each musician on this split presents different aspects about the theme; Acedia sings about what it means to die while being alive; Kojoohar presents his personal journeys to collative unconscious utilizing analogue hardware; and Acclimate does what he does best by creating sonic sceneries.

“Split”, so properly titled, has Acedia bearing four songs in a row by themselves. While I have never heard of the genre angst pop (though I know of an act by that same name), I find it quite similar to experimental pop. What I found on each of these songs were lo-fi sections of almost sci-fi influenced synths that gave me outer space vibes. Acedia’s vocals also carry a lo-fi vibe. Throughout each of the songs, however, I felt as if there was missed potential. Acedia utilizes a mixture of spoken word and slightly sung lyrical delivery. However, I think they need to nail down one or the other. Their voice can be powerful at times, but it is at odds with the underlying beat. I feel as if neither reflect each other very well and that the vocals and beats oppose one another rather than working in harmony. It’s an alright, but flawed, section of work. Much the same can be said for their collaboration with Kojoohar, ‘Forget My Name’.

Tracks six and seven belong to Kojoohar and Acclimate equally as they made the tracks ‘Enwomb’ and ‘Inhume’. ‘Enwomb’ does seem to follow dark ambient tropes at first. There’s a cavernous effect throughout the entirety of the track, but it’s a song whose brilliance shines after listening to it with a pair of studio headphones. It is there that the static-like bits pop out, where each twang echoes into the far distance, and every bit of sampled noise punctures the still silence. ‘Inhume’ follows a different route, bringing in rhythmic noise to the table. Static and glitch provide a huge boost to the frequency found within the song and there’s a sense of oncoming dread that never left me throughout its run. It’s also another song best suited for headphones; the amount of sounds, such as the windchimes near the four-and-a-half minute mark, that you might miss otherwise are worth the attention to detail. These two songs alone last a little over sixteen minutes, making up over a third of the split. Well done on both accounts.

While I do not find Acedia’s portion of “Split” to be as endearing as I wish it to be, the potential they have shown here is quite remarkable. Some fine-tuning and work is all that is needed to transform them into the angst pop preacher that they can be. Kojoohar and Acclimate’s portion of the split, however, is a sonic journey that I’d be willing to travel down again sometime soon. Whether it’s the more meticulous and open sound of ‘Enwomb’ or the harsh pulsations found within ‘Inhume’, I found pleasure with both songs multiple times throughout my run with “Split”. For all this, I give the split a six-and-a-half out of ten.