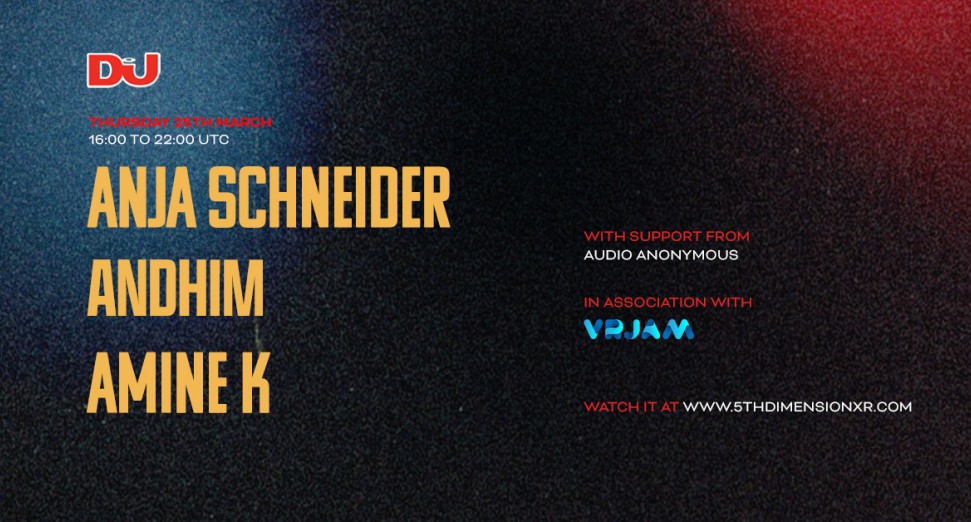 The digital environment is the brainchild of virtual reality experience company VR JAM, and has been created in partnership with Twitch, where live streamed sets and performances from electronic and hip-hop artists will be presented. Using a combination of 3D graphics, special effects and lighting, performances will be streamed live, directly into the virtual reality space.

This Thursday, 25th March, the 5th Dimension will launch a series of live streamed DJ sets in partnership with DJ Mag. From 4pm to 10pm UTC (Coordinated Universal Time), DJ sets from Anja Schneider, Andhim and Amine K will be live streamed through 5DXR’s Twitch channel. The second edition of the series, which will take place next month, will feature sets from Claptone and Osunlade.

This week’s stream follows the 5th Dimension’s launch event on 14th March, which saw Axtone Records hosting a label showcase, reaching 385,660 unique viewers. Axtone will host a monthly VR stream through the channel from April onwards. You can check out a clip from its inaugural stream below.

Learn more about VR JAM’s 5th Dimension via their website, and keep up to date with upcoming streams via their Instagram.

Tune into the 5th Dimension this Thursday, 25th March, at 4pm via this link.

Eden Prince @ Axtone In 5D from Sam Speaight on Vimeo.