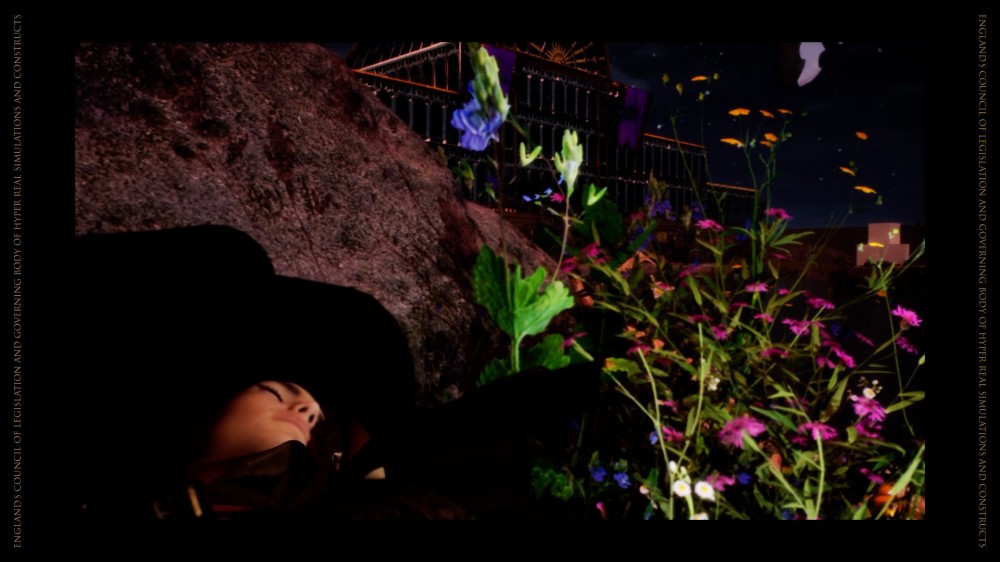 Brought to you in association with England’s Council of Legislation and Governing Body of Hyper Real Simulations and Constructs.

c / a describe themselves as “a London based post-genre music and performing arts duo with a keen interest in artificial intelligence, video games, experience design, post-internet art and pioneering magical digitalism,” a dizzying introduction that goes some way to prepare you for their intricate, concept-heavy musical productions and visuals. Melding avant-garde electronics with surreal computer-generated environments, their work, according to the duo, is backed by England’s Council of Legislation and Governing Body of Hyper Real Simulations and Constructs, a fitting sponsor considering how accurately they capture the experience of moving around a city mediated by social media, navigating the virtual stack that sits atop the smog. It’s a theme that’s at the forefront of the exceptionally titled ‘Fucking with an online date at a beautiful natural spot somewhere in the Beckenham Place Park’, which is accompanied by a somnambulist visual from ecolagbohrsac2021.

“The music video for this particular track is a recreation of a very vivid lucid dream at the Crystal Palace Park”, explain the duo. “Born out of a need to study the ironies – even a certain beauty in them – in our everyday lives, and clearly drawing imagery from the socially distant times of small groups of people at local parks, the video is simply a camera wandering around and documenting the construct and the ‘chat’ of its almost nullified inhabitants.” The digitised back-and-forth of online dating apps appear transfigured in this hyperreal space, manifested as quotes from Andrei Tarkovsky and lyrics from American hardcore band AFI and British prog group Porcupine Tree. A lonely man mouths off about a bedroom recording setup, while Hatsune Miku drifts off with Porcupine Trees ‘Deadwing’ stuck in her head. “How are you feeling these days,” asks someone. “Ready and Able,” answers someone else.

This flattening of the virtual and physical speaks to c / a’s interest in artificial intelligence, their disjointed online flirting approximating sliding into the DMs of a chatbot trained using a data set compiled by someone with an esoteric taste in music and film. It’s an effect the duo term “magical digitalism”, the method by which they create music using generative music. The duo’s tracks ‘Knowledge’ and ‘THE PRIMER’, each taken from their debut album, THE ONLY WAY WE KNOW TO HAVE FUN, both utilise neural networks in a process by which melodies are “conjured” by a trained artificial intelligence model dating back to the earliest self-educational programming exercises. ‘Fucking with an online date at a beautiful natural spot somewhere in the Beckenham Place Park’ builds upon a seething flurry of synthesis and hiccuping samples, gradually decomposing into the chilling peals of cybernetic fox screams as the camera zooms out, the digital illusion of safe and sanitised augmented connectivity shattered to reveal the messy reality of physical interaction.

‘Fucking with an online date at a beautiful natural spot somewhere in the Beckenham Place Park’ is taken from THE ONLY WAY WE KNOW TO HAVE FUN, which arrives on July 9 and is available to pre-order now.