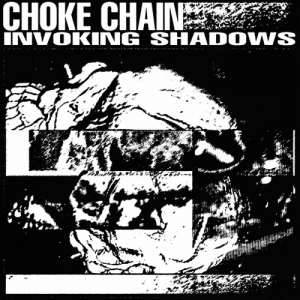 Choke Chain has practically become a household name in the EBM scene overnight. I’ve been a listener of Choke Chain’s music from the start and it was as if one day I was posting about their music on Brutal and then, within a month or so, everyone in the scene was going wild for the project. And that enthusiasm is well deserved; Choke Chain’s music is grandiose and infectious upon first listen. Their introductory EP “Chain Tactics” released back in July of 2020 and received high acclaim from the likes of I Die: You Die and landed on post-punk.com’s “Best of 2020”. Both respectable blogs in their own right, this was an achievement on its own. Their debut even sold out on both their own Bandcamp page and Reclusion Records’. This would repeat for a second and third time with their follow up EPs “Endless Death” and “Death Tactics”.

The sales record of his EPs aren’t just for show, either; Choke Chain’s music is damned good. That trend of crafting boot-stomp worthy EBM also extends to his latest release “Invoking Shadows”, a six track blast of non-stop industrial and EBM mechanics. What kicks it off is the song ‘Nightfall’. The introductory moments make my skin crawl as a low bassline rumbles with atmospheric synths back it. Harsher EBM crashes make their way into the song as Choke Chain shouts his ass off. The steady beat never really feels like it lasts for an entire three-minute and fifty-two seconds either; by the time it was over, I was ready to play it again. Amazing start to a wonderful EP.

‘Falling Down’ hits in next on the EP. Folding dark electro synths into his aggressive approach to minimal EBM beats, ‘Falling Down’ is a brutal and punchy ballad from start to finish. For those looking for dancefloor rhythm eager to get rivetheads clashing then look no further than ‘Losing the Way’. Moody synthesizers once again back the main combative beats and I had plenty of workouts within the gym where this was my anthem. The final original song on the album is ‘Power’. Amping up the pace, ‘Power’ relegates all its power to quick beats and non-stop synths. I do feel as if Choke Chain’s vocals were off in this song and never really found their way into the beat. Nonetheless, I had a good time with the track.

Two remixes are attached to the EP. Mind/Matter remixes ‘Losing the Way”. Choke Chain’s version of the album is alike a raw and bloody steak; its rough, gritty, and tough. Mind/Matter is like a professional chef who takes that same steak and cooks it to medium-rare perfection. In other words, the EBM beat is alive and well but it’s much more crisp and clear rather than being harsh and angry. It’s a wonderful take on Choke Chain’s relentless audio assault. On the other hand, Qual’s remix of ‘Nightfall’ embraces old-school mechanics, engaging in minimal synth play. Well done to both artists.

Choke Chain is repeating history for the project once again with this stellar new release. His EBM is addictive and well rounded. The shouted vocals never dominate the mix and even sound a bit muffled to keep them balanced. The tracks are ferocious and merciless in their beat-delivery. Eight-and-a-half out of ten!