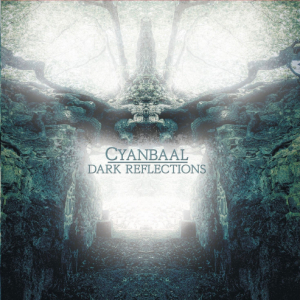 Cyanbaal (See’ann -Ball) return with their fourth album Dark Reflections and first with American collaborator and now full-time member Haether Wayward. Previously, Cyanbaal was a solo project created by Patrick Wenzel. Patrick often collaborated with other part-time members, but it wasn’t until now that Cyanbaal became a duo.  The moniker reflects the combination of Cyan (greenish blue color) and Baal (Lord, God). The artists claim no real meaning to the name and feel it’s better to leave it up the audience to interpret.

With Patrick living in Germany and Haether residing in the US, the entire album was done remotely due to the imposed travel restrictions and safety measures the world was adhering to during raging apocalypse of 2020-2021.

Cyanbaal seem to embrace the strange and unusual and run with it. They market themselves as an “unknown genre” but settle for a divergent offshoot of an electro-darkwave amalgamation for those in need of some sort of point of reference. I think that’s a good place to start. Musically, Cyanbaal’s primordial state was most-likely rooted heavily in the experimental realms and developed later into a morphing of many genres to create something just awkward enough to be ostracized from any singular genre. The feel is slow and menacing and moves to moderate and haunting. The approach is deliberate with a minimal foundation saturated with plenty of eclectic layers settling for an uncomfortable yet comfortable feel to the music.

Haether’s vocal style masks some of that sonic uneasiness from Patrick’s trademark approach to sound execution, but not all. The vocals dwell in a monotone holding pattern sometimes with just Haether or just Patrick (“Blind Pygmalion vers. 2021)”, and other instances where they work together. “Japanese Ghost Story” is perfect example of the simultaneous vocals yielding an ominous feel enhanced by the intricate sound that accompanies the vocal pieces. The music releases a feeling of supernatural and natural wonder. The elements come alive and devour with severe consequences. The music in all of its creepy complexities are only enhanced by the vocals that draw us into a world we design in our heads based on the songs’ genetics and our own experiences with reality, film, books etc. The shadow realm thrives and flourishes within the confines of Dark Reflections and all of it’s inhabitants greet us with anticipation. From the mischief of the imps to the tormenting specter beings, the sounds we hear give life to the worlds that fascinate us as well as terrify us.  “

Seance (Vers. 2021)” is a supernatural stunner that continues down that long dark unlit road in the middle of nowhere. Yes, it’s about a seance, and we’ve seen enough movies to know nothing good comes from a seance. It’s a more straightforward approach with plenty dark imagery and other dark enchantments. It’s not overly eclectic in its delivery which gives it more of a singular genre identity, thought I don’t know what that singular genre is. As you settle into the track and listen the words you can envision a seance taking shape. Haether’s vocals have an uncanny way of delivering a melodic brooding spoken feel as the stories unfold. From the aforementioned seance to the creepy dolls in the basement to bazaar matters regarding a castle full of secrets, the unnerving unsettling textures paired with the storytelling bridges a sense of wonder that fuels the haunting imagery making this very endearing to the listener on multiple levels.

The vocals move away and back into the monotone vibe. As the vocals shift around, you can certainly feel and experience some wonderful dark melodies that mingle with opera and gothic influences. The opening tracks reflect the varying inflections in the vocal approach with “Swallowed Light”,”Madame (vers. 2021)”, “Dead Forest”,  “Black Neon Light” and “Social Death”. The later two seem to share more characteristics with expected sounds and style you hear on a routine basis from other artists. It’s like petting your dog or your cat. You gently caress your hand downward away from the head because that’s how the fur is set and it feels natural. When you go the other way it disrupts the fur and changes the mood of the beast. I certainly mean this as a compliment. “Black Neon Light”, “Social Death” and “Flare” push away from the eclectic tendencies to a more traditional feel from an electro-inspired track.

Dark Reflections is a testament to the methodical maniacs that take their time to create something self satisfying as well pleasing to the audiences they pander to. Arnte of Pyrroline was tapped for the mixing and mastering. It’s the holistic approach that leads to a solid album that can be appreciated in many ways.

The artwork reinforces the underlying themes of horror, fantasy and the supernatural to compliment the against the grain style of sound expression they perpetuate on Dark Reflections. If you are looking for something formulaic with cookie cutter predictability, this is not what you are looking for. In the end Dark Reflections delivers an approach that separates itself from the herd with its unique and meticulous design. Cheers to those that travel where others seldom do.