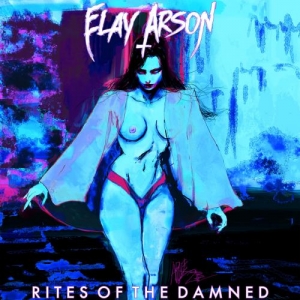 Elay Arson is a dark synthwave project hailing from Colorado Springs, Colorado in the United States. The project was initiated by founding member Daniel David Larson, who in November of 2016 released his debut album Bloodbath. The apocalyptic post-rock meets synthwave formula caught on well with fans, with the cassette copy of the album selling out via Kill All Music. Now you can check out the debut album for a one mere dollar and if my opinion is worth anything to you, Bloodbath is worth that dollar and probably more.

2017 finds Elay Arson in better shape than ever thanks to multiple collaborations and a brand new band member, guitarist and songwriter Devin Harrison. Before Harrison came along Larson was working on what was a six track demo EP. They worked together and a fruitful relationship was born and from the six track demo spawned an eighteen track full length album titled Rites of the Damned.

Rites of the Damned starts off with a cinematic intro that bled to me everything else I would experience on the album: an eerie synthwave palette backed by wicked electrorock melodies. The album sounds as if John Carpenter was playing synths in one hand and making love to an electric guitar in the other – and it is fantastic beyond reason. My personal favorite track on the album by these two musicians would be the ninth track ‘Well Beyond the Unknown’. The sweeping synths, kicking drum pads, and addicting guitar shredding led me down a retro-futuristic path that I did not want to escape

There is also a host of guest musicians and vocalists on the album that have to be mentioned as well. The wonderful drumming brought to us on ‘Revelry to the Dark’ was performed by Florian Millot of the French progressive power rock group Perpetual Escape which, in turn, made for a more organic experience. Track number fifteen ‘And I Felt the Abyss’ also featured another French artist Carbon Killer. The synthwave producer added his own cinematic blend of synths and guitars.

Elmora, Pennsylvania based synthwave project Reapers also offered up their talents on the eighteenth track ‘Dead Horizons’. The song is a lot more calm and serene than a lot of the other tracks found on the album, but that did not stop it from being a fantastic addition to Rites of the Damned.

Vernian Process came along to remix ‘Ticking Omen’ and what resulted was a quicker, bouncier version of with new underlying synths. In some ways it could be called a dance remix, but it would have to be for the darkest clubs on the darkest of nights. Xyntex remixed ‘Eastern European Vampire Punks’ and the track immediately went down to sleazy, dirty territory. A healthy dose of industrial influence was added into the mix which I absolutely adored.

My personal favorite collaboration track came along with ‘Seas of Humanity’. Guest vocalist Becca Starr of the Scottish 80s retrowave duo The Van Dammage provided all her singing prowess on this song. Though the synths and guitars have taken over a majority of the other songs, it was clear on this song that the drums were going to be the hammer that set the nail in. The powerful drummer, the 80s rock vocals, and altogether awesome mix in ‘Seas of Humanity’ led the track to stardom.

The only track that I found to be a little odd in the mix of the guitar riddled synthwave album was ‘Caged Bird’. Now, the song itself is not bad by far – it’s a slow burning rock song with melodic guitars and rhythmic drums all work together well. Elay Arson even brought in another guest vocalist Justine Ruppert who, in my opinion, has an absolutely gorgeous set of chords. That being said, when I got to the track and listened to it all the way through my final thought on the song was, “Where are my synths?” Again, a very well done song just possibly put on the wrong album.

Elay Arson has managed to create an eighty minute long synthwave overture packed with lots of talented guests and vocalists. While there is only a digital download available currently, it is cheap for only $5. The hard copies will be available in early August so keep your eyes peeled for that. For now, however, slap on some headphones and get lost in the Rites of the Damned.