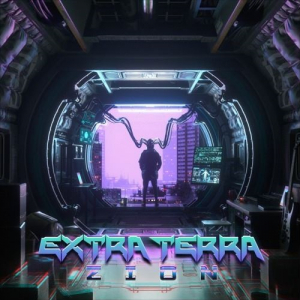 When last I clashed with Extra Terra on their phenomenal album “Projekt 2077“, I fell in love with the synthwave, bass, and electro producer’s focus on well crafted cyberpunk tunes mixed with incredible aesthetic and artwork. Since before that album and prior to, Extra Terra has been teasing a brand new album with a series of singles, those being ‘Virtual Reality’, ‘The Sentinel’, ‘Elon Trust’, ‘Trinity’, and ‘Neo Wick Mode’. For those with an affinity for The Matrix film series, you’ll understand that most of those reference the epic sci-fi saga. Now, in October of 2021, those singles as well as six additional brand new tracks converge into an eleven track cyber-electro banger known as “Zion”. Just like Extra Terra’s previous releases, “Zion” is a futuristic album packed full of film references and dancefloor bangers.

The album starts off with a gorgeous cinematic opening track; notes run through and the blare of synths commonly found in movie trailers to signify an epic adventure hit home. Grand synths sweep in the background. After a minute-and-a-half, the track fades into nothingness. The following track, ‘Morpheus’, begins with tribal-like drums and a synth that sounds like a siren; it’s around the fifty-three second mark that I am thrust into a dubstep-inspired electro ballad that had me nodding my head the whole way through. Robotic vocals sampling the word, “Destruction,” speaks out which sinks me deeper into the track. Like yin and yang, the following track is named after one of cinema’s greatest villains, ‘Agent Smith’. Backing out of dupstep territory, ‘Agent Smith’ is a straight cyberpunk dancefloor hit. The mix is perfect, as well, allowing every beat and rhythm to be heard perfectly.

A collaboration track with Rogue VHS hits next titled ‘Trinity’. The knocking sound effects within the track gave it a slight nod to italo-disco without ever evolving into the genre, while Extra Terra’s formidable bass impulses kept the track on a path to electronic domination. Another collaboration comes in next. This one is with Max Brhon and is titled ‘Elon Trust’. Featuring much crunchier electronic lines and several sections of ambient and cinematic electro, ‘Elon Trust’ is a wild ride. Going solo once more, Extra Terra brings in ‘Virtual Reality’ and ‘The Sentinel’. While the first is a smooth sailing, stompy sci-fi hit, the second is a fast-paced chase down a futuristic freeway congested with traffic.

I very much appreciated the following collaboration with Matteo Tura, ‘The Oracle’. It mixes up ambient electronica with techno energy; it consistently bounces back and forth between the two, without ever sounding wrong. The always punchy Lazerpunk comes back with a vengeance on “Zion” as he’s featured in the track ‘Neo Wick Mode’. The title likely a nod to Keanu Reeves’ performances as both Neo and John Wick, it nonetheless packs a wallop of electronic bliss not to be missed. Extra Terra rides alone on ‘The Cave’ which is a very well done song consisting of underground, tribal techno beats and breaks of sci-fi ambiance. The final track ‘Outside The Simulation’ rolls me out of the album with more sweeping synths like the brighter counterpart to ‘Inside The Simulation’.

Extra Terra’s “Zion” is an album where the faults are hardly recognizable. The production, not that I mentioned it throughout the review, is top notch and the mixing and mastering is absolutely on point. Throughout my journey with “Zion”, I found myself relaxing to the mesmerizing beats or utilizing the punchier rhythms to help me get through my routine at the gym. Nonetheless, whenever this album plays I find myself focusing solely on what’s going on in the music; I love the fact that I can always hear the individual beats that play throughout the album. It’s a true testament of love to The Matrix, science fiction, cyberpunk, and music in general. For that, I give this album a nine out of ten.