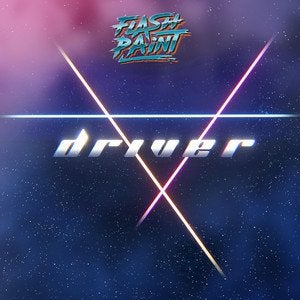 With a lifetime of musicianship under his belt, electronic artist Direwulf is venturing into territory with a progressive house/synth-wave sound with a new identity- Flash Paint-  and new music. Never one to be tied down to any genre, the new single “Driver” is a catchy yet laid-back offering that highlights the multi-genre artist’s natural musical versatility by honing in anthemic synth-tinged sonics and heavy beat that transport you right to the club.  Speaking of the track, he said : “ With “Driver” I want to bring people on a journey, somewhere out of this world and into the synthwave cyberpunk world.”

The accompanying music video- made in collaboration with an Italian animator Luca- further elevates the out-of-the-world experience the track boasts.  About the video, Flash Paint commented: “The track creates a little dystopian world and the video is literally bringing you guys to that world.”  Having been part of the world of music since the young age of nine, Flash Paint- who is also the founding and producer of popular metal-core band, Vivienne’s Verdict- has played everything from metal to rock n roll and pop to house, tech- house, electro, trance, trap and dubstep. Set to prove that even veterans in the game can change things up and make it better, he is ready to further diversify his range and style with “Driver.”