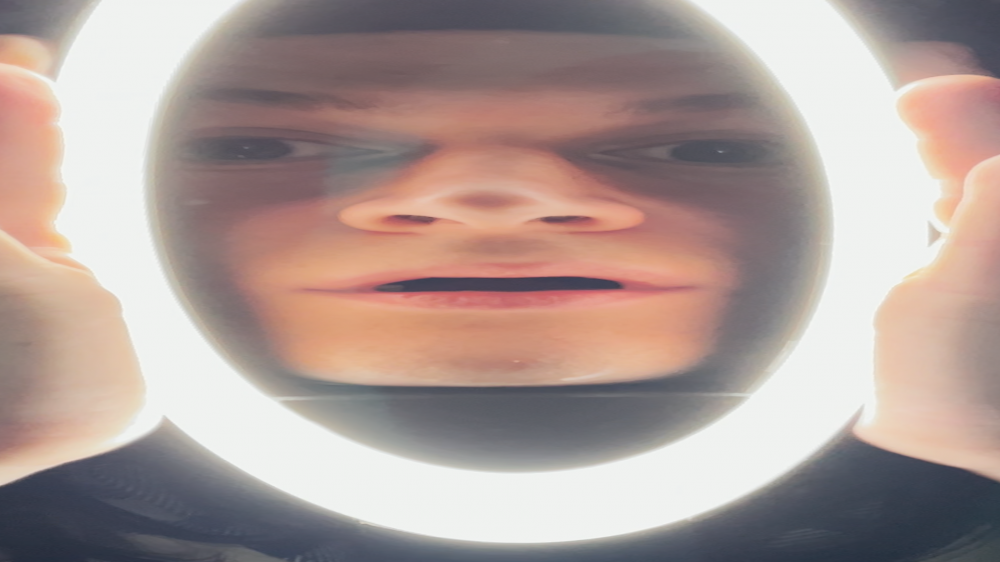 Artist Mark Prendergast stars as a YouTube unboxer and tech influencer who warps reality around a misshapen ring light.

Back in 2020 writer and artist Holly Childs collaborated with composer and sound artist Gediminas Žygus on a series of works entitled Hydrangea. Culminating in an album for James Ginzburg’s Subtext, Hydrangea explored political conspiracy theories, post-internet theories of history, and both artists’ lifelong experiences with rave culture. Working together with Metahaven, who created artwork and lyric videos for the album, Childs and Žygus attempted to unpack the “use of contemporary and postmodern artistic strategies to design narrative uncertainty,” as well as the ways that political theorists such as Steve Bannon, Aleksandr Dugin and Vladislav Surkov manipulate and weaponise information to design realities for submission and control. Setting gnomic dialogue, read by collaborators Elif Özbay, Marijn Degenaar and artist Mark Prendergast, against Disney string sections, Ravelian piano impressions and HD sound design inspired by gabber and hardcore, the duo blur the lines between fiction and reality, building a disorienting world in which you’re never quite sure whether you’re listening to post-structuralist theory, a data leak or someone’s desperate attempt to make meaning in a sea of multiplatform noise. For their follow up, Gnarled Roots, a contraction of the title of the original performance of the work, Hydrangea 2: Gnarled Roots of a Creation Theory, Childs and Žygus follow these threads, mapping out an intricate account of 21st Century mythology, taking the destruction of the Twin Towers on September 11, 2001 as its origin story.

The album and performance take this title from the infamous PhD thesis of Australian businessman Craig Wright, a computer scientist and businessman, who in 2016 made the spurious claim that he was, in fact, the creator of bitcoin, the mysterious Satoshi Nakamoto. This exploration of confused contradiction, the presentation of two possible realities, neither of which seem to have any satisfying consequence, refers back to the original image of the Hydrangea, a plant that blooms either pink or blue depending on the soil it’s grown in, a phenomena which today invokes the deranged spectacle of gender-reveal ceremonies shared on social media. It’s in this space of online artifice and reality-bending that the warped visual for Hand Axe takes place. Created by Mark Prendergast, who also narrates the track and stars in the video, Hand Axe follows

a YouTube unboxer and tech influencer making content about a uniquely contemporary artefact – the ring light. “I’m fascinated by the whole YouTube software tutorial / consumer tech review / unboxing content creation phenomena – It seems to be a kind of marker of where large swathes of the western world is at right now, and I’m really interested in the mechanics of it all,” explains Prendergast. “There’s an inherent mania to these kinds of videos, especially the unboxing ones, where the person is trying to keep what is in essence quite a boring activity engaging.”

“The product worship aspect of the whole thing only adds to the mania”, he continues. “In my mind it can all lead to people betraying themselves, at mercy to the strange ‘adsphere’ we all find ourselves in.” The video sees Prendergast receiving delivery of misshapen ring light, yet, rather than disappoint his followers, he warps the world around him and his own form in order to adapt to the defective technology. Drawing inspiration from Michel Gondry’s video for The White Stripes’ ‘Denial Twist’, Prendergast flips the aspect ratio, exposing the mutant properties of the digital image in the process. “When the vertical video format started becoming more prevalent on smart phones and Instagram/TikTok, I always wanted to explore the distortions that happen if you stretch a 16:9 landscape video to 9:16 extreme portrait, as I feel the new formats that arise from the progression of technology can become sites to explore where culture is at,” he says. “When Holly and Gediminas asked me to be in the video, it felt like a perfect opportunity to give space to my inner influencer. The track’s theme of the relationship between human and tool seemed to really be encapsulated in the narrative of an influencer reaching out and turning the camera in order to deform himself around the product he is unboxing. There’s two different versions of the video too, desktop and IGTV. As always, make sure to like and subscribe, and follow @600unboxes for more content.”

“We started making the Gnarled Roots album at a residency in the Lithuanian spa town of Druskininkai in 2018,” explain Childs and Žygus. “It is a small town that used to be a Soviet sanatorium town, that is essentially in a massive, lush and magical forest. We were talking about the history of Lithuanian forests and them as being the containers for underground and illegal activity, such as illegal raves, mafia criminality and guerilla warfare. We were also thinking about forests in general as spaces that can be impenetrable and secret, where some entities are able to navigate the terrain, and others get completely lost – the legibility of the space is a gradient. Druskininkai is on the border with Belarus; and is now also the backdrop of the refugee crisis that is playing out, and that is the subject of an intense informational war that can be seen all through the media.” In Hand Axe, we see Prendergast trying to figure out this new, deformed world he finds himself in, navigating a digitally transfigured topology that only makes sense in relation to the new technology he has introduced into the environment.

“The concept of the track is loosely based around the hypothesis that technological tools and generally design itself, is continuously reshaping the human body,” they continue. “It was originally theorized by architectural and design theorist Mark Wigley. The video Mark has made for Hand Axe works with one of the central tenets we come back to often in our work: “find the false illusion and make it real”. In this video, his character unboxes a ring light, and finds that it’s not as he expected. Instead of questioning the seemingly defective ring light, a tool for casting even light over a portrait subject, he moulds himself to fit this tool, he warps his own dimensions to honor the ring light as a perfect circle. “Human, the species to redesign itself // Making things that don’t work is human.” Committed to manipulating the parameters of reality in service of content, Prendergast pulls the aesthetic potency of Instagram filters and apps like Facetune out of the smartphone and into the physical world, rendering himself a malleable object within his own flattened representation of material reality. In the process of his production, his own image is deemed less important than the capabilities of the technology used to capture said image.

You can find Holly Childs and Gediminas Žygus on Instagram. For more information about Mark Prendergast and his work, follow him on Instagram. Gnarled Roots is out now.

Some of the resistance stayed deep in the forest
Their space, their rules
And no one would ever fuck with you
Because they can’t find you
Because there are no maps to complex ecosystems
Of places of plants
Maps cease to make sense or have clue

Human, the species to redesign itself
Making things that don’t work is human
If you feel the urge to go forwards, look backwards

To smash the world day in, day out
Sunrise it