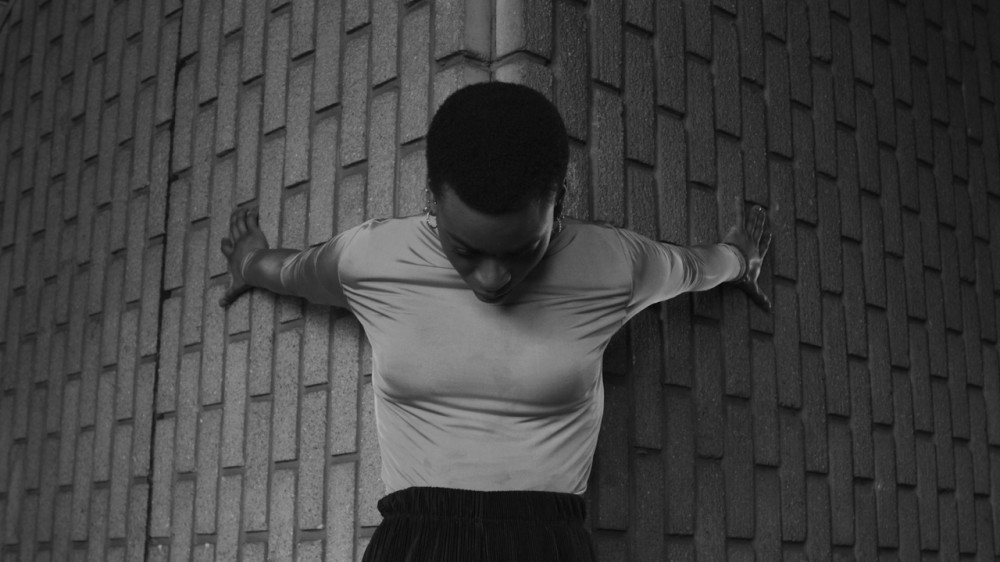 Julianknxx and Darryl Daley explore the connections between Brutalism and Black bodies.

In Black Room, Julianknxx turns his attention to the history of Brutalist architecture, as well as its inextricable links with the history and experience of Black people living in Britain. Considering what he terms “hyper-organised living” in the city of London, the poet explores what it means to live and breathe in buildings such as Trellick Tower, Balfron Tower and Grenfell Tower, buildings he understands to symbolise a certain disconnect between Black bodies and the natural potency of the earth. “When you look at those spaces in terms of survival, what it means to live a healthy life, that connection to earth, it’s just not attainable,” he says.

“It’s a dead space, literally, like concrete is dead,” he continues. “It’s almost like, to survive, you have to look within, because we live in this dead thing, and that’s the cry, to look back home.” Working in collaboration with the artist Darryl Daley, Julianknxx translates his poem Black Room into an audiovisual investigation of strategies for living within this kind of constructed space, contrasting archival footage of sweaty dance floors, thronging masses and a congregation singing along to the classic spiritual ‘Wade In The Water’ with the lonely expanse of Baynard House in Blackfriars, London.

Dancer and choreographer Nafisah Baba matches the building’s imposing lines with taut, visceral movement, manifesting an almost immune response to the warmth and intimacy of Black communities being transplanted into hyper-organised, yet impersonal, concrete space. It is through the physical response captured in Black Room, in both words and movement, that Julianknxx identifies a continuum that connects the ingenious design of Brutalist architecture and the intricate hegemonic narratives that run through the history of England, narratives designed to obfuscate structural racism and our country’s colonial past. “It’s fantastically crafted, it’s beautiful,” he says.

“Obviously I’m on the other side of it,” he explains, “but when you actually look at the craftsmanship of the language over time, we now live in this space where you almost don’t want to talk about it, and if you do it’s almost like there’s this gaslighting thing that happens.” Woven into the history of Brutalist architecture in Britain are the struggles experienced by many immigrant families living in tower blocks and social housing, their fight to survive under the gruelling conditions of government austerity taking place within in the economical architecture of their homes. Moreover, it is now impossible to think about Brutalist architecture in London and not picture Grenfell Tower burning. The memories of the 72 lives lost in this tragedy will forever re-shape what it means to inhabit these spaces.

In Christina Sharpe’s 2016 book In The Wake: On Blackness and Being, the scholar explodes and expands the meaning of being ‘in the wake’, connecting its multiple registers – including the path behind a (slave) ship, the act of keeping watch with the dead and the experience of coming into consciousness – positioning it as “the conceptual frame of and for living blackness in the diaspora in the still unfolding aftermaths of Atlantic chattel slavery.” In this way, Julianknxx likens his experience of moving through Brutalist spaces as being in the wake, both in terms of mourning those that died at Grenfell and in terms of coming into consciousness of the historical and cultural significance of Black bodies housed in brutal buildings.

“What does it mean to defend the dead?” questions Sharpe, “To tend to the Black dead and dying: to tend to the Black person, to Black people, always living in the push toward our death? It means work.” It is this wake work that she identifies as a means of mapping “the everyday of Black immanent and imminent death”, a way to navigate the Black experience and a “method of encountering a past that is not past”. For Julianknxx, his poetic practice constitutes this wake work, an active engagement with the people and places of his present that is informed by an understanding of the turmoil of the past. By “pulling a black / song out of the basement”, he re-writes the Brutalist space as a nexus for these stories, a site for wakeful contemplation and, as Christina Sharpe describes it: “hard emotional, physical and intellectual work.”