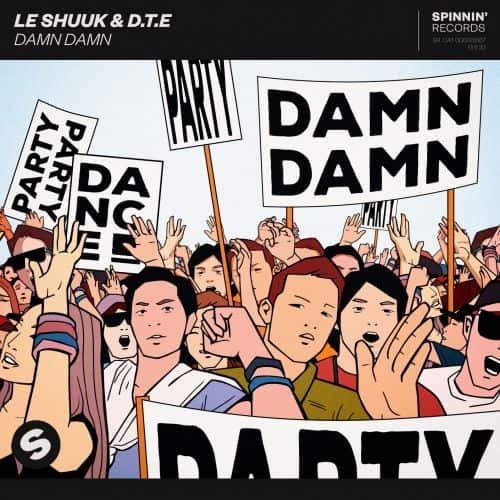 Make way for a raving collab between le Shuuk and D.T.E, presenting their claim to fame with the raw tune ‘Damn Damn’. Both artists clearly express their dissatisfaction with the current situation, as lockdowns everywhere keep the people from dancing together. It’s a necessary measure, but also something these DJ/producers are fed up with. The pounding tune ‘Damn Damn’ underlines their hope and eagerness for the party to continue soon.

It’s not a surprising message. As the whole cultural sector is suffering from worldwide lockdowns, and dance events, in particular, are not taking place at all, the need to start dancing together is getting stronger by the day. Of course, it’s not only the audience that feels this way, DJ’s are suffering with them, aching to jump on stage again and present a raving show.

So, for sure these guys feel the need to get the party started again. With ‘Damn Damn’ they try to create momentum for that, a pounding tune that would normally enlighten the festival stage and get everyone jumping in a frenzy. It’s a record that continues on their earlier releases, presenting a sturdy groove that builds on pulsating triplet sounds, hardstyle elements, and nicely rolling slap house rhythms. These raw beats are countered by a strong melody and enticing vocals, calling out to ‘not give a damn’ and just start to dance again.

It’s a call to action, but with respect for the current rules. ‘Damn Damn’ is the anthem that reminds the audience there’s still music to dance to, and the rave should continue as soon as this is possible. Just hold on, and get ready to get back on your dancing feet – this is the song to keep you raving for now.

“Music and dance are the universal languages of mankind. They are a tool to peacefully unite all people, but can also become the soundtrack for a revolutionary movement. ‘Damn Damn’ represents the idea of new beginnings, and we hope it will become reality soon.”  – le Shuuk

“Every revolution begins with a spark. If I can’t dance to it, then it’s not my revolution. The only way to make sense out of change is to plunge into it, move with it, and join the dance. Be young. Be stupid. Be reckless.” – D.T.E