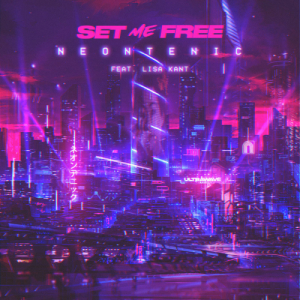 Synthwave producer Neontenic is no stranger to Brutal Resonance; their 2019 album “Synthmonster” was reviewed on the site to great acclaim by myself. I wound up giving it an eight-and-a-half out of ten and called it addicting. They shortly followed up their debut album with “Neon Prince” in 2020 on Synthetix. Hard to admit, but I never got the chance to give that album a complete whirl; perhaps it’s something that I’ll get around to this month. Nonetheless, Neontenic is back with a brand new single titled ‘Set Me Free’. This not only serves as a groovy synthwave and synthpop song, but also announces Neontenic’s forthcoming album “Ultrawave” which is due out on December 17th, 2021 on Timeslave Recordings. While that’s just a month away, we have this little teaser to prep ourselves for their next album.

And what a teaser it is. ‘Set Me Free’ sets the tone for the album, whose concept revolves around a future where a machine empire has taken control of Earth, and a small faction of rebels resists their cold control. Neontenic is up to his usual synthetic shenanigans with cranking basslines, warping lines meant for the future, and an overall crisp production. This four-on-the-floor cyber dance track is heightened due to Neontenic’s collaboration with guest vocalist Lisa Kant. While I have never heard of this musician before, her voice is stellar and powerful. She makes it seem as if this is the anthem for the fictional rebellion in this universe. Whether she’s singing cleanly or her voice is being digitally manipulated, Lisa Kant sounds wonderful and stunning.

With only a little more than a month to go until ‘Set Me Free’ releases, I’d have to say that I’m hyped for when the album drops. There’s nothing wrong or out of place with the single and I only have positive notes about it. Hopefully, the rest of the album is able to match pace with the brilliance on this track. Nine out of ten!