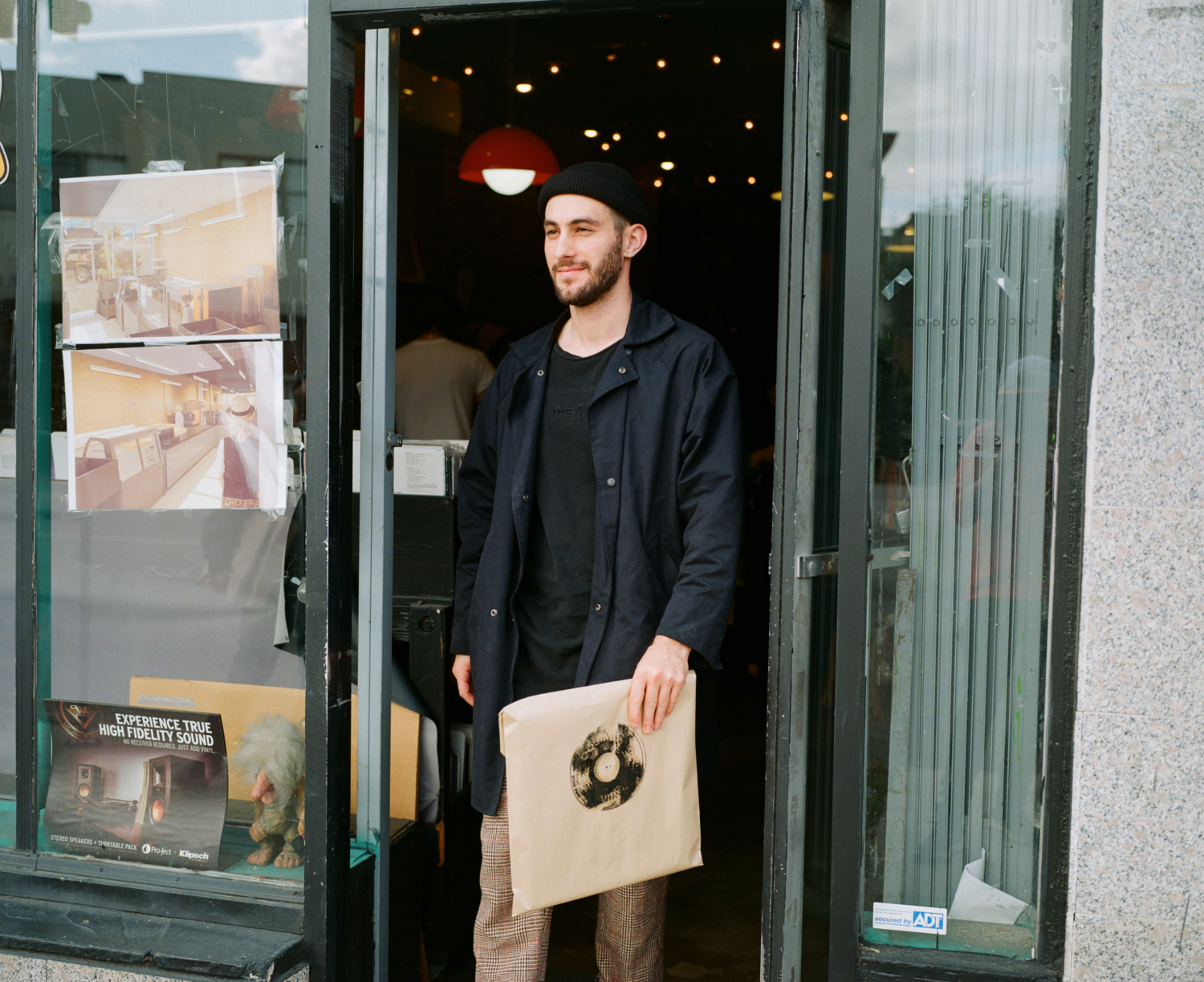 Deep in the recesses of Downtown Los Angeles, just before the streets turn from mildly unsafe to fully dangerous, lies a charming record shop named Stellar Remnant.  It’s a haven for all genres, subgenres, and obscure classifications of underground dance music on vinyl.

Detroit. Minimal. Trance. Synth-Pop. These are just a few of the dividers nestled between open record sleeves containing wax, ready to be pre-listened to using the in-house turntables.

“For me, listening to records is how I got my start. I grew up listening to vinyl, and when I first started DJing it was on vinyl.”

But for the fledgling artist, vinyl is so much more than just a starting point.

It can be an opportunity to break away from the short attention-span culture of streaming services and dive into an album front-to-back—a listening style he describes as, “for the heads.”

It can be a treasure trove of samples that spark productions like those he’s already released on DIRTYBIRD, Gruuv, Desert Hearts Records, and most recently, his debut LP, The Universal Groove, out now on his own imprint, Percomaniacs.

So, naturally, being someone with that sort of poignant connection to vinyl, Lubelski is relishing his experience in Stellar Remnant, a store clearly crafted by people who share that connection.

“I love shops like these because they really do encompass more than house. Or they don’t just bunch up music into a broad category like “electronic.” Then you don’t know what you’re getting. Here we have drum and bass, techno, house, disco and funk. So they really did their digging here.”

As we make our way around the humble establishment that defines the ethos “quality over quantity,” the Percomaniacs boss is indulging his analog inclinations. The joy he feels from the simple act of corporeally holding music is furthered as he identifies artists and labels he knows like Todd Terje, Joeski, Atlantic and Nervous before putting the records under his arm, securing them for purchase.

Underground names like these trigger thoughts and stories surrounding vinyl in various applications. For example, when he collided with Daniel Avery and Moodymann at Phonica Records in London. How The Universal Groove would likely be sold at Stellar Remnant. The plethora of vinyl he had access to from birth:

“I had a massive collection of my parent’s records and my stepdad’s records; classic rock, R&B. I had my grandmother’s records as well. She listened to a lot of dance music like Fatboy Slim, Moby, and the Prodigy. My dad listened to Led Zeppelin, The Allman Brothers, Grateful Dead, The Doors, that sort of thing.”

These conversations are quite different compared to those we had earlier in the day while exploring Cosmic Vinyl, an equally humble establishment curated with the same attention to detail as Stellar Remnant—except with close to the diametric opposite catalog.

In the presence of rock records, jazz records, indie records, records that were first placed on turntables decades prior, Lubelski’s mind wanders back to those eras, if not further into the past.

He explains how ancient Greeks used music to describe their religions with the elocution of a university professor. He recounts house music’s evolution from African-American popular music:

“Classical is very European based, but house music and all popular music today is extending from Africa. If you look at polyrhythms and the history of black people in America, it all comes from blues and then jazz and from jazz to rock and rock to disco and disco to house. It all stems from that,” he says as names like Hall & Oates, Quincy Jones, and Billy Idol end up in his bag.

But paramount to all, music is “a human thing,” according to Lubelski. It’s intertwined with all art forms. Present in all cultures. And while he considers house music (or rather four-on-the-floor beats) The Universal Groove, the records he chose across Cosmic Vinyl and Stellar Remnant prove his taste is just plain universal.

Dancing Astronaut discussed his record choices in addition to going deeper into his relationship with vinyl and getting into the specifics of his debut album.

DA: What do you look for when you’re digging among records you don’t know? What catches your eye?

I mean in a record shop all bets are off, but realistically you look for really cool artwork or label that you’re familiar with. It is a lot of faith, but when you go shopping frequently you start to see a lot of the same names like RCA, Atlantic, Crosstown Rebels, the people that used to press a lot of records as well. So you get familiar with the labels and other things like that, but then sometimes you have to find one that sparks your interest.

How does it feel when you choose a record you don’t recognize and find out it’s a winner?

You never know until you hear it! One record that I bought without ever hearing that became an all-time favorite of mine was Francis Bebey’s African Electronic Music 1965-1982. Something special about finding something obscure that just clicks.

“Located right on Sunset in Echo Park, Cosmic Vinyl is one of those hipster (but not pretentiously so) vinyl spots that have an awesome collection of jazz, rock, and indie music, as well as some small boxes of electronic, hip hop, and others. Really enjoyed finding some samples here.”

“Obviously Eurythmics made some of the most iconic music to come out of the 80s and 90s. Anyone who says they know dance music, but doesn’t know Eurythmics really doesn’t know dance music. I don’t personally know the songs on this particular record, but sometimes you find those rare B-side tracks that you end up loving. Eurythmics have always been a huge inspiration to me, and they were a huge inspiration on The Universal Groove in trying to create timeless music for my album.”

“I don’t know any of the tracks on this record, but Hall & Oates are a favorite of mine, no doubt. They uniquely understand music and knew what good music needed to sound like. You can’t deny that Hall & Oates are able to transcend generational boundaries for listeners. And for that, I got this one strictly as a record to listen to.”

“The guy has over 28 grammy awards, and about 80 nominations… Probably one of the most iconic and prolific composers of modern music. So safe to say, Quincy Delight Jones Jr. is huge inspiration to me when it comes to creating timeless music with composition at its core.”

“Really cool, spot in DTLA. This was my first time going in there, but I’ve heard great things from tons of friends. They’ve got a massive sound system, and usually have someone spinning vinyl. This time around ambient electronic was on rotation.”

“I love everything Joeski does. His production skills are truly on another level. I instantly recognized the vinyl sleeve, already having been a fan. Didn’t even need to listen to it to know it would be good.”

“I think a massive part of vinyl shopping for me is the artwork, which is why this one really struck me. What [great artwork] says to me is that it is all an artistry thing. Music is universal because it exists in all art. You paint to music. You make films with music.  So I think to have a good visual aesthetic means a lot. Plus it had a remix from the legends Tiefschwarz. Really nice sounds on this one.”

What is “The Universal Groove.”

Well, I’d say house music is the universal groove. Four-on-the floor beats speak to people in a way that no other music can. There’s no other genre in the world that has as many subgenres.

You can look at jazz which has bossa nova, classical jazz, bebop and it has a huge history, but house music has only been around for around 30 years and has more subgenres than you can count. So the title The Universal Groove actually refers to the fact that house music is a universal groove.

So was this album an opportunity to integrate your diverse taste in music into that groove?

Yeah definitely. I think some of it was ‘80s dance music inspired. Some of it was ‘90s house and stuff like that. With this album, I was really trying to make something that wasn’t just existing as a dancefloor track, so I think it was a shift for me to focus on music essentially at its root form. I wanted to make something that speaks on a deeper level as opposed to just bumping your fists.

You described several of the records you chose as “timeless.” What do you think makes a song/album truly timeless? What’s going to make The Universal Groove timeless?

Replayability for sure is a big one. I tried to make something that transcended eras and transcended genres while still being underground but accessible. It’s about knowing how elements work together and knowing what makes a song great conceptually.

There’s not much in music that hasn’t been sung or talked about, and there’s nothing new that you can say that hasn’t already been said. So with this album I wanted to modernize those concepts, and I think in talking about those concepts that are humanistically eternal we can discuss whether or not this album is timeless or not.

When I start a new beat I rarely finish it unless I feel really, really happy about it and I can listen to that same loop for hours without getting bored. So I think that’s one factor of timelessness. My aim is to just make music that I believe in, that I love, and I could see myself listening to forever.

You have connections with Hot Creations, DIRTYBIRD, Desert Hearts, and other impressive imprints, yet you chose to release your debut LP on your own label. What makes The Universal Groove a Percomaniacs album?

I think I really just wanted to build something for myself and looking at guys like Claude VonStroke; he did it all on his own label. So seeing the success of guys like Damian Lazarus and Claude VonStroke and Jamie Jones made me realize that if you want to be a serious artist you have to put together these bodies of work. That applies to bands and other genres as well.

With the way things are and digitally how saturated everything is, people say it’s better to release things in EP forms, but there is something just so beautiful about having nine or ten tracks that work together cohesively. You put a lot of time and effort into this one thing.

So releasing it on Percomaniacs was a way for me to claim back some of my own artistry as opposed to lending it out to other labels in order to be seen.

What purpose does pressing The Universal Groove on vinyl serve for you?

It’s partially about our aesthetic with Percomaniacs. Every release looks like it’s pressed to vinyl and it wouldn’t make sense if we never did it (laughs).

But even more than that it’s an homage to the people that started out in this scene. They would take old busted records, melt them down and press new ones with the tracks they were making just so they could play them out.

Whatever your medium of listening to the music, it’s really cool to have a physical copy of something you created as opposed to a digital drop in a massive sea of tunes.

The Universal Groove is out now on Percomaniacs. Stream the entire album in full below. Digital downloads are currently available with vinyl copies coming soon.

This interview was aggregated from several conversations in addition to being edited for readability.