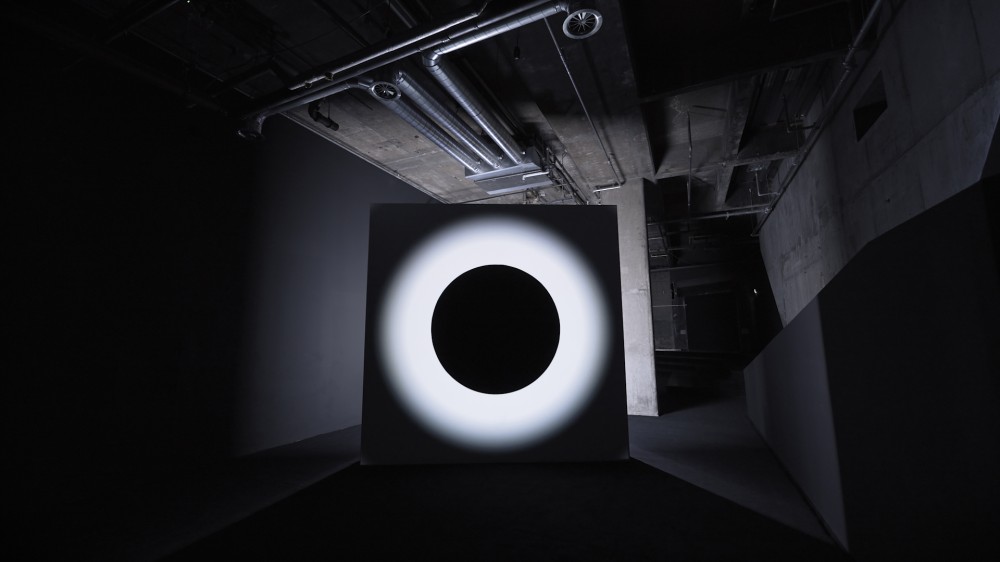 With point of no return, Ryoji Ikeda condenses the unknowable chaos of the event horizon of a black hole into a work of order and balance.

Composing a delicate assemblage of basic shapes, sounds, light and shadow, the artist eschews the intricacies of data for a more sculptural approach. While gesturing towards the sublime, the infinite expanse of space and the immense, reality-warping gravitational force of a black hole, he focuses in on the beauty of the physical, bringing together a few simple elements to make sense of something unthinkably complex. Through his own artistic process of playing with space, the artist finds purity in basic structures while drawing inspiration from the vast scope of the universal. “The entire exhibition is based very much on physical experience, not only intellectual content,” he says of his upcoming exhibition at 180 The Strand.

“point of no return is a very simple, very intense piece,” he continues. “I paint a black circle on the wall and project light around it. This intensifies its blackness. I feel like it’s always firing, you get a bit scared and it becomes a bit overwhelming. The other side is the total reverse, just a white circle. It never changes, just stays still like a moon.” One of a number of works that Ikeda describes as “pretty much improvised”, point of no return was premiered at the Eye Filmmuseum in Amsterdam back in 2018 and saw the artist working within self-imposed parameters and responding to the physical space of the museum to create something original for the exhibition. “I wanted to have a new piece for my solo show there and I couldn’t think of anything,” he explains. “I didn’t even have any concept, I just played and experimented with a sketch and it was just completed in three nights.”

“A circle can represent infinity; it’s like a Platonic sphere, something very pure, like planets and stars,” he continues. “The ‘point of no return’ is actually a term used by astrophysicists, it’s like the event horizon of a black hole, the point at which you can’t escape its gravitational force.” The installation marks a movement away from the dense, data-driven works Ikeda is best known for towards simpler conceptual works grounded in a sculptural materiality, revolving around structure and mechanism. Gesturing towards the most universal of themes while at the same time centering simplicity, point of no return presents a reified visualisation of the artist’s fascination with the cosmos.

“The system is very simple and there’s lots of space to play with, a bit like jazz. Just one chord with a very simple rule,” he says of the installation. “I really don’t think anything intellectual in preparation for this kind of piece.” This unwillingness to prescribe anything overtly academic to his work is another recurring theme for Ryoji Ikeda. While many of his installations are borne out of a highly conceptual mode, Ikeda cares much more about their emotional impact. “What I’m doing is really conceptual, like a journey I’m always enjoying in my brain,” he admits. “So it’s very important for me to think about concept, but it’s absolutely not important to the visitors and the listeners and audience. This is my opinion. When people go to the museums or galleries to see paintings and installations, I think some people are really ashamed if they cannot comment intellectually, or interpret intellectually. I think this is very wrong.”

“Some contemporary art is a little bit like an intellectual game.” he continues. “I’m not a big fan of this kind of stuff, because I’m a musician.” Even with works like point of no return, a minimalist portal consisting of a pulsating projection, bright light and ambient sound, Ikeda maintains his role as a composer, in this instance a composer of a kind of spatial jazz. “I like to play both physically and conceptually, but if you just push the concept you can’t enjoy the actual physical condition,” he says. “So in the end, as I always say, my approach is very much like a musical composer. If I have an exhibition I really enjoy composing in time and space.” point of no return is just one of these improvisational spatial compositions, a work that is just as transportative as some of his more complex installations, but reliant on a purity of concept and a tangible sense of simplicity.

point of no return features as part of Ryoji Ikeda’s upcoming show at 180 The Strand. Produced and curated by The Vinyl Factory and Fact in collaboration with Audemars Piguet Contemporary, the exhibition follows five years of collaboration between Ryoji Ikeda and The Vinyl Factory, which includes the UK premieres of Ikeda’s supersymmetry in 2015 and test pattern [N°12] in 2017, as well as several vinyl albums and new commissions. The exhibition will present 12 large-scale, multimedia works, six of which will be premiering on the global stage, and five will be showing for the first time in the UK.

The show opens on May 20 and will run until August 1. Tickets are available now at the 180 The Strand website. For more information about Ryoji Ikeda and his work, you can visit his website and follow him on Instagram.