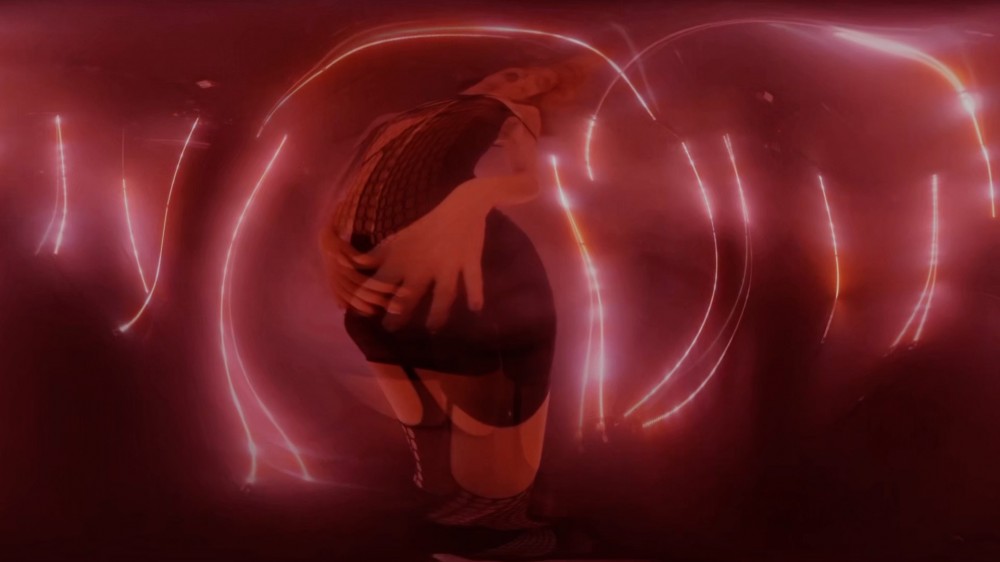 In recent years Theresa Baumgartner has emerged at the forefront of a new generation of artists blurring the lines between installation art, audiovisual performance and experimental film. Working in collaboration with fellow Fact Resident MFO she has created immersive set design for Jlin, performed live with Juliana Huxtable and Ziúr as part of their live audiovisual poem OFF LICENSE and perhaps most notably, transformed Oscar-winning composer Hildur Guðnadóttir’s Grammy-winning score for Chernobyl into a site-specific, multi-channel performance alongside Guðnadóttir, Sam Slater, field recordist Chris Watson and Francesco Donadello. Yet, despite the dizzying scale and intricate technicality of Baumgartner’s projects, the artist’s interests do not lie in any one discipline or technology but in collaboration, instinct and emotional exchange. More often than not, Baumgartner tunes into her best ideas by listening to her gut. “It’s about creating some sort of feeling that lives with the music,” she explains. “I’m more interested in the emotional part in anything. At the end of the day I’d rather have people reaching back into themselves, being overwhelmed or just able to forget about themselves.”

These will be familiar experiences for anyone who has witnessed the artist’s work in the flesh. More than simply immersive, her work encompasses installation, live performance and theatre, crackling with the synapse-singeing energy of a DIY noise show, or squat rave. Indeed, it was Baumgartner’s formative experiences in punk and noise music scenes that ultimately inspired the artist’s transition from fine art to installation work and AV performance. Studying painting in Berlin, she quickly became disenfranchised with the legacy art world she found herself in orbit of. “It felt a bit weird to come from a working class background and a leftist punk scene, where I was always around noise and the oddities of the music world, to then being basically trained up to create luxury products for people who are already wealthy,” she says. “It just didn’t make sense to me. I started to be really not okay with it, I didn’t want to be in that world anymore.”

Spending more and more time attending and documenting shows across Berlin, Baumgartner began to conceive of a way to transfer her painterly sensibilities into a more democratic space. “I started thinking of the screen as basically like a painting, but just with the added factor of time,” she explains. “I was interested in creating worlds and environments that tell a story.” Distancing herself from the aspects cultural and economic inaccessibility of museum and gallery spaces, the artist set out to create experiences designed to be enjoyed communally, work in service of “creating some sort of feeling that lives with the music.” Though Baumgartner is careful to highlight a completely new set of obstacles inherent within the experience economy of the audiovisual art space, including prohibitively expensive tickets, door policies, funding body politics and mystery money arts patrons, it was in the comparatively democratic space of the live performance that the artist was able to access a more liberating, collaborative art practice.

“Surrounding yourself with your friends is influential because you throw ideas around that boil in everyone’s head,” Baumgartner emphasises. “I understand how scenes develop and evolve because you all sit in the same stewing pot.” Contributing to festivals like Berlin Atonal and CTM and heading up lighting design and visuals for Berlin’s pioneering audiovisual space Trauma Bar Und Kino, the artist has been able to move among a wealth of world class talent, drawing inspiration from a plethora of artists and collectives. It was in this way that Baumgartner’s collaboration with Hellenic experimental taste-maker Evangelia Lachianina, otherwise known as Abyss X, developed. “I started talking to Evangelia about this idea for a 360-degree camera and a light installation that I’ve been wanting to play with for a long time,” she explains. “I wanted to have something that was high energy and doesn’t really give a fuck, to let out some steam and make it weird.” Transposing 360-degree footage into a single channel, Baumgartner captures Abyss X at her most distorted, seemingly trapped in an illuminated chamber, moving in a ritualistic fervour to the sounds of SOPHIE’s shape-shifting remix of her own track ‘Animosity’.

“Evangelia is a dancer and acrobat and does this crazy stuff on a pole in her live show,” continues Baumgartner. “It’s kind of sexy and feminine and the lights lend this strip club vibe, but then it gets really fucked up because of the distortion. I like the contrast with the hyper feminine, this super sexy, super strong woman.” Made in collaboration with BFF (Best Films Forever), a production company co-founded by Baumgartner to support femme, femme-identifying, non-cis, non-straight people to find a foothold in the video production and tech world, the collaboration sheds stark light on the lack of diversity that still exists in audiovisual art spaces. “There’s a crazy lack!” the artist exclaims. “Everywhere I roll up I’m always surrounded by the same people, who are mostly straight guys trying to tell me about my job and that I suck.” Embodying the abject and the libidinal simultaneously, Abyss X’s fishnets and lipstick are stretched and deformed by Baumgartner’s digital manipulation, subverting the processing of the digital image from a tool of commercial production and social media platform primacy to something altogether more confrontational.

“I’m fucking with the male gaze,” says Baumgartner. “There are clear symbols that this is supposed to be attractive, but then I’m morphing her body, morphing her features.” It’s here that the artist’s DIY influences are most apparent. Everything from the visceral performance of Abyss X, the sparse lighting and smoke to the asymmetry of Baumgartner’s frame, her disregard for convention and perfection, imbue the piece with subterranean potency, like you’ve just stumbled across two friends testing their artistic limits in a cramped Berlin basement. “I’m okay with things looking rough, or disorganized and turning that into a statement,” she says. “With stage design especially, often everything’s symmetrical and super slick. I’m okay with it really not being that way, to a degree where I’m really going the other way.” Encouraging each other to push their respective practices further, Theresa Baumgartner builds a world for Abyss X to inhabit, imperfectly and unashamedly.

This kind of world building stems from broader world view that was shared in part by their third, sadly absent collaborator. “The collaboration is basically a tribute to SOPHIE,” explains Baumgartner. “Her production works really well on a technical level, it’s artificial and highly produced, so blending it with the 360 technology fucks that up again. It’s out there, technologically, but then it breaks it, and that is also what SOPHIE did with her music.” Through both sound and image, SOPHIE demonstrated that it was possible to find a pureness of expression and an emotional truth in the most artificial, technologically-mediated places. Through digital distortion and physical theatrics, Theresa Baumgartner and Abyss X pick up this thread, injecting DIY energy into audiovisual art and performance.