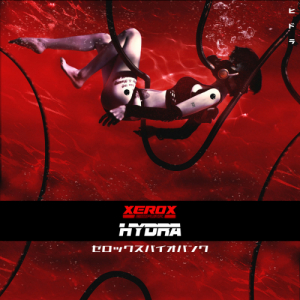 Based on their choice of font alone, I was able to deduce that XEROX BIOPUNK is a project heavily inspired by classic science fiction films and cyberpunk. If the title of their debut EP is not enough to go off of (it’s called “Laser Thunder”), than perhaps the fact that they included a version of the title track with rainfall is enough. After all, everyone believes that rain and cyberpunk go hand in hand considering Blade Runner made that a thing in the first place. All that being said, that is not me mocking XEROX BIOPUNK or a rather sad attempt at humiliation; rather, it’s a compliment. A compliment stating that, while XEROX BIOPUNK gives thanks to the various media that’s influenced his music production, he’s able to transform those influences into solid pieces of music. This goes doubly-so with XEROX BIOPUNK’s latest EP “Hydra”, whose mystical charm and storytelling is all part of the product.
“Hydra”, then, tells the story of a protagonist attempting to break into a biotech corporation to free a woman who was born through a “synthetic-amniotic broth”. This so happens to be the titular Hydra, and it is the protagonist’s hope that she will be able to wake up a drowsy world. In proper fashion does XEROX BIOPUNK begin the EP with “Night City Blues” which is both a nod to Blade Runner as well as the TTRPG Cyberpunk 2020. Rainfall pours down during the first twenty-five seconds or so before synthetic, xylophone-like sounds echo across an empty city. Curious synths continue to whirl the introductory track to life before a cinematic, sweeping synth comes and goes. I am let off of that journey by the sound of dimming rainfall. This is a proper introduction to an album, and doesn’t feel overstayed; it’s only two-minutes and eight seconds which is a perfect time.
The following track is the title track, appropriately titled ‘Hydra’. With the concept of the EP in hand, this song sounds like a fitting track for a stealthy corporation raid. The main bassline is punchy and deep while the backing synths keep the moodiness of the song grim and foreboding. It’s as if around every corner, danger lurks – which should be the case. The final song on the EP is titled ‘Neo-Yakuza 99’, which is an organization in the mythology that is also chasing down the main protagonist. The thumping rhythm is exactly that; a slow and menacing bass beast that gradually expands to include layered synths and brilliant electronic lines.
XEROX BIOPUNK’s third EP, then, is simply astonishing. It’s a short, sweet, and to the point array of cyberpunk twists in a synthwave and darksynth world. While I would like to see a fully-fledged story written about this conundrum, the rescue of Hydra and all, the cinematic music that I get from this EP is enough to tide me over, nonetheless. This is a project that pays homage to their influences without ever leaning too hard into them. And they make it work. Eight-and-a-half out of ten!
This review was commissioned through our Ko-fi page.