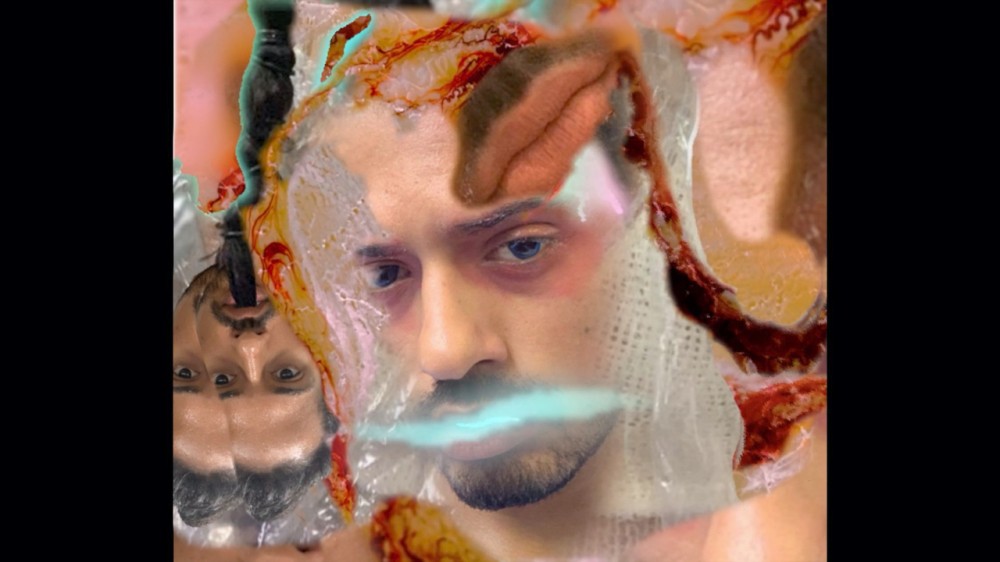 In their latest multidisciplinary work, Rubby Sucky Forge, Eve Stainton thinks through and with the emotional edges of metal. Combining choreography, experimental theatre and video collage, Stainton creates a performance ecology within which they and their collaborators Joseph Funnell and Gaby Agis can explore the complex convergence of cold, hard metal and swelling, shifting bodies.

Moving around a stage populated with metal bars, chains and cigarette lighters, Stainton harnesses what they term “a kind of psychedelic horror that can be caused from being in proximity to cold hardness”, channeling the properties of metal into moments of human intimacy, mapping possible continuities between the material, the emotional and the somatic.

This engagement with the exploratory potential of horror is distilled into Stainton’s digital collage, which during the performance is projected to the sounds of Beatrice Dillon’s track ‘Workaround Three’ and is presented above. Manipulating images of the piece’s three performers, Stainton warps the cast into visceral Cronenbergian assemblages that shift to follow their own science fiction choreography in which the bodily and the psychedelic combine.

“I think psychedelia (or a psychedelic state) has emancipatory potential in its queerness and its ability for disorientation” explains Stainton. “I believe in disorientation as a way of disrupting linear thinking, a way of getting lost and being ok with that, a way of altering perception.”

“I relate this to my movement practice too – being in disorientation or an altered state of awareness to experience something other than my body, or my body in its otherness. A state of psychedelic horror might create a trippy momentum where disruption, liberation and change can occur.”

By centring the performance around Beatrice Dillon’s ‘Workaround Three’, Stainton imbues the work with an urgent and physical energy they associate with club spaces: “It feels futuristic, but in the context of the work, it holds the visceral memory of euphoria from these referenced club spaces, but also these spaces closing. There is adrenaline, and melancholy.”